Mueller may send former Trump Campaign Manager, Paul Manafort, to prison, pending trial, rather than letting him stay under house arrest, because he has tried to get witnesses to change their testimony regarding the activities of the Hapsburg Group. This is rather silly as their US activities appear to be clearly documented in a belatedly filed report by Mercury Public Affairs group, which seems to be the PR company mentioned further below.

“2. Manafort’s Attempts to Influence Potential Witnesses
On February 23, 2018, the grand jury returned the operative Superseding Indictment of Manafort. Doc. 202. As relevant here, the Superseding Indictment included new allegations concerning a part of Manafort’s lobbying scheme that is alleged to have violated the Foreign Agents Registration Act (FARA), 22 U.S.C. § 611 et seq. Informally referred to by Manafort and his co-conspirators as the “Hapsburg” group, this part of the charged illegal United States lobbying scheme involved the secret retention of a group of former senior European politicians who would act as third-party paid lobbyists for Ukraine. Manafort was alleged to have funneled to the Hapsburg group more than 2 million euros from overseas accounts he controlled. See Superseding Indictment ¶¶ 30–31.

Two individuals who were principals of a public-relations company (Company D) acted as intermediaries between Manafort, Person A, co-defendant Richard Gates, and the Hapsburg group. Those two individuals are described herein as Persons D1 and D2. Manafort, with the assistance of Person A and Gates, managed the work of Persons D1 and D2 on behalf of Ukraine (along with the work of Companies A, B, and C, and others).2 Persons D1 and D2’s work for Manafort, which included their work directing the Hapsburg group, was—from its inception—directed at both the United States and Europe. Manafort himself wrote a June 25, 2011 memorandum to Person D1 describing the goals and deliverables of Persons D1 and D2’s work for Ukraine. Manafort stated that a “goal of the program . . . is to educate western media, expand the media awareness of what is really happening and establish mechanisms to maintain a constant flow of information into Europe and the US,” including “Washington.” Domin Decl. ¶ 6. Similarly, Manafort noted in a “conference call agenda” that one deliverable of Persons D1 and D2’s work would be “Print/electronic media coverage in European [sic] and US,” and that Ukraine’s contract with Persons D1 and D2’s company would “cover the EU and the US.”…

Following the public disclosure of the February 23 Superseding Indictment, Manafort and Person A—who is a longtime associate of Manafort’s—repeatedly contacted Persons D1 and D2 in an effort to secure materially false testimony concerning the activities of the Hapsburg group… ” Excerpt from GOVERNMENT’S MOTION TO REVOKE OR REVISE DEFENDANT PAUL J. MANAFORT, JR.’S CURRENT ORDER OF PRETRIAL RELEASE, Case 1:17-cr-00201-ABJ Document 315 Filed 06/04/18 Entire document found below, with emphasis, and original at link: https://www.courthousenews.com/manafort-accused-of-witness-tampering-by-special-counsel/

European politicians got millions to lobby for pro-Russian government in Ukraine: A new indictment has accused former Trump aide Paul Manafort of paying some €2 million to European politicians to support a pro-Russian government in Ukraine. The lobbying group was led by a “former European chancellor.” Date 24.02.2018. http://www.dw.com/en/european-politicians-got-millions-to-lobby-for-pro-russian-government-in-ukraine/a-42721849 (Emphasis our own.) 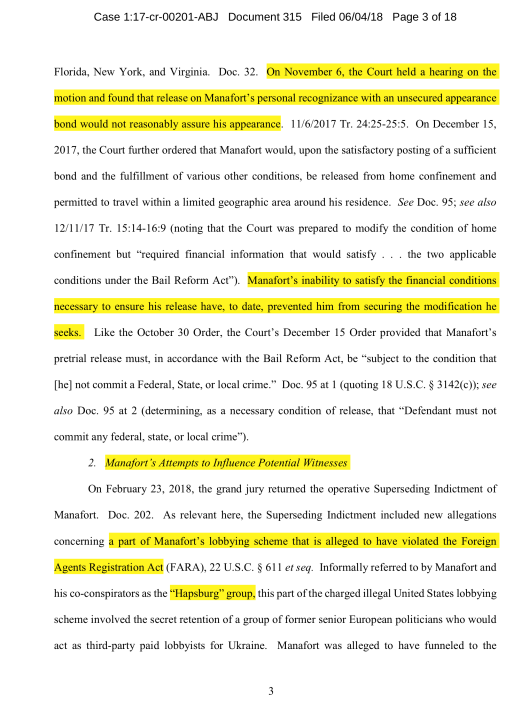 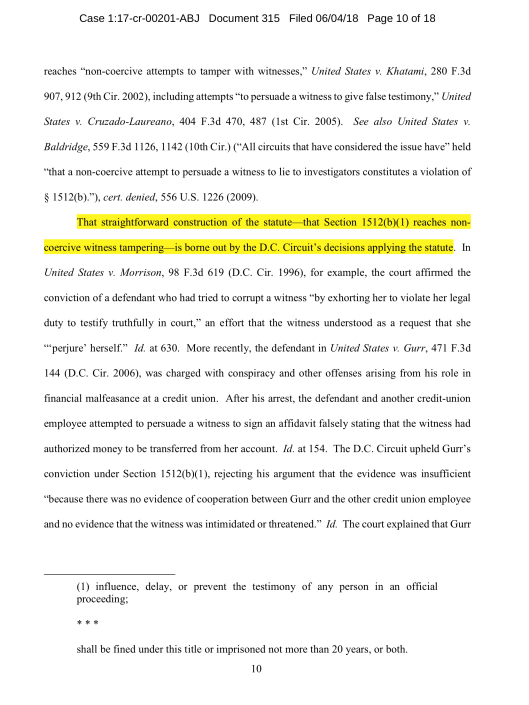 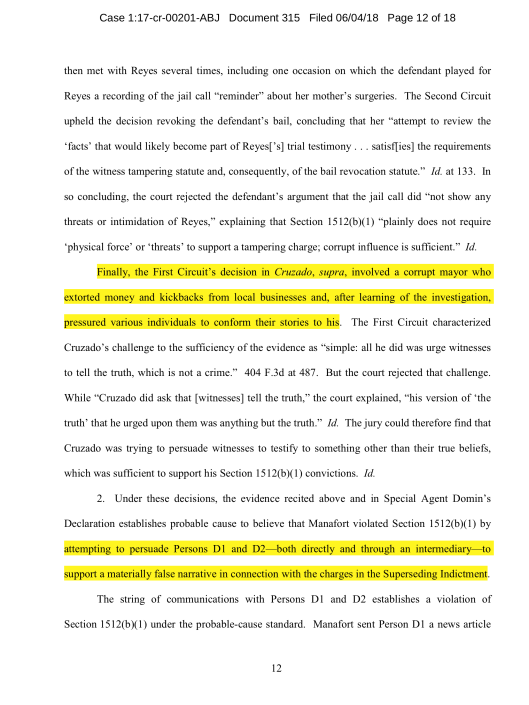 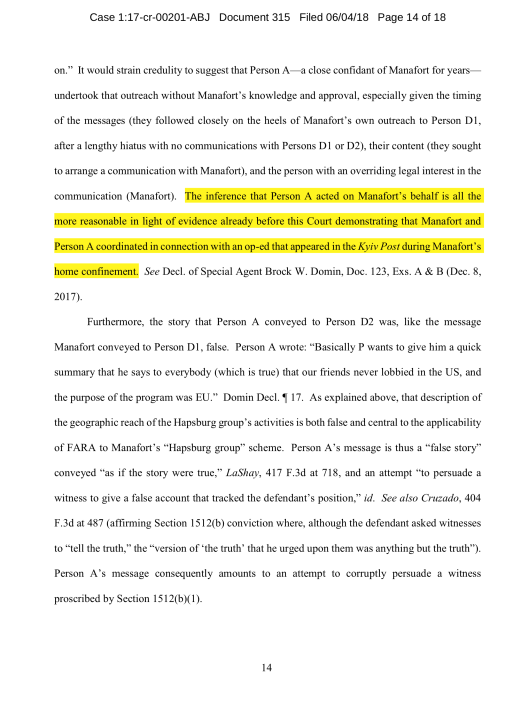 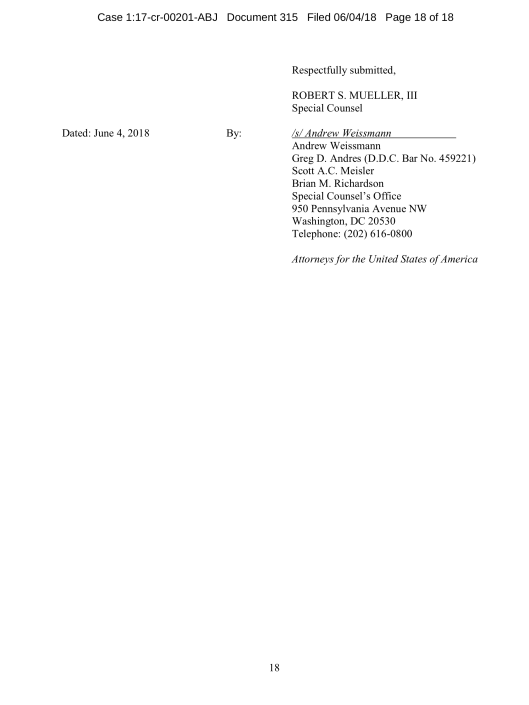 Emphasis our own. Original here: https://www.courthousenews.com/manafort-accused-of-witness-tampering-by-special-counsel/