Two weeks before a very important Primary Election for the US Senate, the Republican Secretary of State for Mississippi, Delbert Hosemann, had still failed to submit grant paperwork for $4.5 million to help secure elections. Mississippi was less strongly supportive of Trump than Alabama, and, more generally, Mississippi is less Republican than Alabama. Suddenly, Mississippi has not one, but two Senate Seats up for grabs. These could go Democrat if there is no cheating. For one of the Senate seats the Primary is on June 5th. The Democratic Candidate who wins in the Primary matters for the November election. That’s one important point that everyone should have learned from Roger Stone-Nixon CREEP and the Canuck letter, which put Muskie out of the running against Nixon, and why Bernie wasn’t attacked in the recent election. Nixon wanted to run against McGovern and Bernie Sanders was the preferred candidate by Trump supporters (probably Stone) to run against Trump. This explains the utterly amazing fact that no one, except David Duke, talked about Bernie’s Trotskyist Socialist Workers Party (SWP) past connections even thought it is widely known.

The Primaries matter a lot and little to nothing has been done to secure them.

It is worth noting that the current Mississippi Governor Bryant is connected to Brexit-Cambridge Analytica. He served as Lt. Governor under former Governor Barbour, whose lobbying firm (BGR) represented Uranium One in the period of the Russian government takeover, while failing to register as a foreign agent (FARA), and who has long represented Russia’s Alfa Bank, owned by several prominent oligarchs, including German Khan, whose son-in-law was sent to jail for a month in the Mueller investigation.
(See reference links after US Congressman Thompson’s letter.)

At one point (ca 1990s to ?) Russia was Mississippi’s biggest foreign trade partner. Are chickens the Mississippi-Alabama connection to Russia? A Birmingham poultry company with operations in Tupelo was exporting 80,000 pounds of chicken parts to Russia in the mid 1990s: “Mississippi companies see big jump in exports“, by Ashley Elkins Jul 7, 1996 http://www.djournal.com/news/mississippi-companies-see-big-jump-in-exports/article_b1e28d2f-34af-5129-9a00-c1f18f5746f4.html The Acting Senator and Republican Candidate for one of the Mississippi seats, Hyde-Smith, raises and presumably sells beef cattle for slaughter, unless they do it themselves. Is Russia buying Mississippi beef?

This is simply WEIRD – well excepting the fact that the President of the Confederate States of America, Jeff Davis, who tried to exit the United States, was from Mississippi. The CSA lost the war, however. So, why they would want help from Mississippi is WEIRD. Or did the Brexit people sleep through US history? Or, back-door connection to Russia where no one would EVER think to look?! Mississippi Suit Over British Citizens’ Data Alive for Now ” https://www.nytimes.com/aponline/2018/05/18/us/ap-us-cambridge-analytica-mississippi.html

“Russian interference in the 2016 election was a watershed moment for our democracy,” Thompson wrote in the letter. “Russia’s efforts have affected public confidence in elections and its efforts have shown no signs of cooling. Mississippi currently uses a combination of paper ballots and direct recording electronic voting machines (DREs) without a voter verified paper audit trail (VVPAT).”

“Cyber experts agree that the use of DREs without VVPAT is less secure and should be retired, and that States should implement risk-limiting audits regardless of the method of voting used in the State.  Moreover, I believe that election officials in Mississippi would benefit from cybersecurity training.  Although the funding provided through this initial grant program may not pay for all Mississippi plans to do to secure its elections, it will certainly help.” https://benniethompson.house.gov/media/press-releases/congressman-thompson-addresses-failure-grant-paperwork-submission-sec-hosemann 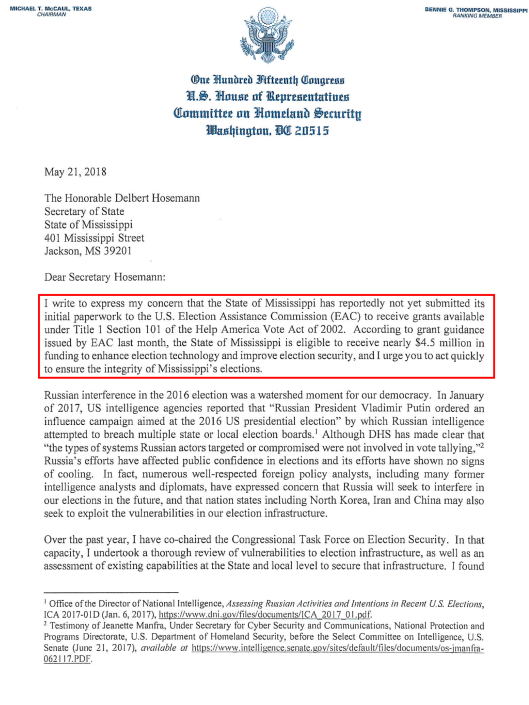