By cancelling the Iran nuclear deal, Trump pacifies his mega-donors, Sheldon and Miriam Adelson, pleases his longtime friend Israeli PM Netanyahu, and makes Putin look good. Sanctions on Iran and its South Pars/North Dome gas field (shared with Qatar) can but benefit Trump longtime advisor-investor Carl Icahn who owns about 14% of the Cheniere Liquified Natural Gas (LNG) facility, and other friend-donors linked to the oil and gas industry, including Putin. Icahn helped Trump keep control of his Taj Casino, before eventually becoming the owner. It will help keep oil and gas prices up, as well as reducing competition. As discussed in the VOA article, it may help drive Europe further into Putin’s arms. See more details about Icahn and Adelson, after the VOA article. 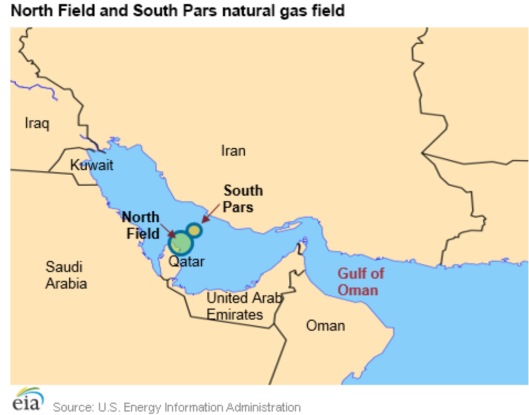 From VOA news –
“Iran Deal: US Exit Opening For Russia?
Russia in Flurry of Diplomatic Activity Over Iran Deal
May 13, 2018 4:00 PM, by Charles Maynes  MOSCOW —
In the wake of President Donald Trump’s decision to withdraw the United States from the 2015 Iran nuclear deal, Russia unleashed a flurry of diplomatic activity aimed at keeping Iran and other remaining signatories committed to the agreement.

But behind Russia’s diplomatic maneuvering, analysts see the Kremlin chasing rewards from transatlantic divisions over the Iran issue while facing risks of deeper entanglement in Middle East affairs.

“Without doubt we will make sure firstly that this does not destroy the JCPOA,” said Russian Foreign Minister Sergey Lavrov, referring to the Iran nuclear deal’s formal abbreviation following a meeting with German Foreign Minister Heiko Maas in Moscow last week.

“This is our common objective,” assured Lavrov. “We confirmed this.”

Lavrov deployed a top envoy, Deputy Foreign Minister Sergey Ryabkov, to Tehran in a move aimed at shoring up continued Iranian compliance with the nuclear deal.

“From the Russian point of view, particular importance will be given to preserving the JCPOA without damaging concrete projects and concrete areas of cooperation that are building between all members of the deal,” said Ryabkov in comments following the meeting.

Iranian Foreign Minister Mohammad Javad Zarif will come to Moscow on Monday for further talks.   German Chancellor Angela Merkel is also expected to join Russian President Vladimir Putin in Sochi later in the week for additional discussions where Iran is expected to be high on the agenda.

A reliable partner in … Moscow?

Yet in aligning itself with Europe firmly behind preserving the Iran deal, Russian analysts argue Moscow sees unexpected diplomatic openings beyond the nuclear issue.

“This is in some respects a win for Russia,” said Alexey Malashenko, a longtime Middle East watcher and head of the Institute of Dialogue and Civilization in Moscow. “Russia may not have any influence over the U.S. and its decision to leave the Iran deal, but it now has a united position with Europe and the European Union.”

Malashenko notes that Trump’s decision to ignore pleas by traditional allies such as France and Germany to remain in the Iran deal accomplished something Putin has long sought but could not achieve until now: a transatlantic rift.

“Trump listened to Macron and Merkel and showed that he doesn’t care. The Europeans are really offended this time,” said Malashenko.

Writing in the online magazine Republic, foreign policy analyst Vladimir Frolov argued that continued failure to bridge those differences offered Moscow the prospect of something much greater than merely isolating Washington — namely, a tentative path to future sanctions relief.

“If the politics of sanctions fall apart at the seams with the West relative to Iran,” writes Frolov, “then why can’t they differ over Russia, when it’s in solidarity with Europe over keeping the JCPOA?”

Never an enthusiastic backer of sanctions on Iran, Russia nevertheless embraced its role as one of the six signatories to the denuclearization swap for sanctions relief deal brokered with Iran by the U.S., Britain, Germany, France, and China back in 2015.

As Europe now debates its response to threats from Washington that the EU cut off future investments in Tehran or face renewed penalties, Moscow seems determined to show Europe that U.S. sanctions are something to be weathered, says Karine Gevorgyan, an Iran specialist based in Moscow.

Gevorgyan points out that major Russian companies are already under U.S. sanctions over the Kremlin’s actions in Ukraine, alleged interference in the 2016 US presidential elections, and — just last week — what Washington says is Moscow’s support of Syria and other rogue regimes.

“They were already sanctioning Russian military exports. It won’t have an impact,” she says.

A statement by the Foreign Ministry similarly chided the White House for “trivial desire to get even with Russia” and warned that attempts to punish Russia economically would continue to fail.

Whether quasi-state Russian businesses with interests in Iran’s oil, gas, tourism, and railway sectors are ready to risk U.S. penalties or pull up stakes remains an open question.

Meanwhile, a more immediate pitfall is the escalating proxy war between Iran and Israel in neighboring Syria, where Russia is engaged in an ongoing military alliance with the Syrian government of President Bashar al-Assad, Turkey, and Iran.

Russia has relished its role in the Syrian conflict as a sign of the Kremlin’s growing role as a player in Middle East politics. Yet the Russian military intervention has also presented challenges to relations with Israel — one of the most vocal opponents of the Iran nuclear deal.

Last week, Israel carried out airstrikes against dozens of Iranian military targets in neighboring Syria, accusing Iran of launching its own missile attack from the area.

Moscow — which values close ties with Israel and yet needs continued Iranian military support in Syria — has called for “restraint from all parties” while faced with the prospect of a wider Middle East conflict.

Yet analyst Alexei Malashenko questions whether Moscow can successfully play the role of mediator given Russia’s traditional approach of “always sitting on two stools.”

In a sign of the diplomatic whiplash that the policy entails, the Kremlin raised eyebrows when a presidential aide indicated Moscow would stall a promise to deliver Russia’s vaunted S-300 surface to air-missile systems to Syria — Iran’s ally — following attendance by Israeli Prime Minister Benjamin Netanyahu at World World II Victory Day celebrations on Red Square May 9th.

President Putin’s primary spokesman later insisted the decisions were unrelated but the challenges ahead were obvious.” https://www.voanews.com/a/russia-in-flurry-of-diplomatic-activity-over-iran-deal/4392131.html (Emphasis our own.)

“US policy on Iran
In a panel discussion at Yeshiva University on October 22, 2013, Adelson said that the United States must get tougher about Iran’s suspected nuclear weapons program. Controversy arose when he said: “You pick up your cell phone and you call somewhere in Nebraska and you say ‘OK, let it go’ and so there’s an atomic weapon goes over, ballistic missiles in the middle of the desert that doesn’t hurt a soul, maybe a couple of rattlesnakes and scorpions or whatever”. He went on to explain that, after a show of force and a threat to also drop a nuclear bomb on Tehran, the U.S. should then say: if “You [Iran] want to be peaceful, just reverse it all and we will guarantee that you can have a nuclear power plant for electricity purposes, energy purposes.”[44][45] Adelson’s spokesman told reporters that Adelson “was obviously not speaking literally” about using an atomic bomb in the desert, and that he was “using hyperbole to make a point that … actions speak louder than words”.[46]…..” https://en.wikipedia.org/wiki/Sheldon_Adelson#US_policy_on_Iran

Adelson is stark raving mad! A nuclear power station will guarantee their ability to make a bomb, as well as to potentially have a nuclear accident! If he is really concerned about Islamic extremism, a nuclear power station increases the chances of nuclear materials falling into the hands of “non-state” actors, who can then make a dirty bomb or perhaps a regular nuclear bomb.

“Donald J. Trump managed to keep control of his giant Taj Mahal casino in Atlantic City, despite having missed a $47.3 million interest payment… had it not been for the intervention of Carl C. Icahn, the corporate raider and financier who is the single largest bondholder, Mr. Trump would probably not have gotten that second chance, but would have been forced into a messy bankruptcy battle in which the bondholders had the upper hand….” “Talking Deals; How Trump Got A Second Chance” By Richard D. Hylton Published: November 22, 1990: http://www.nytimes.com/1990/11/22/business/talking-deals-how-trump-got-a-second-chance.html