“In an interview on Fox & Friends this morning, President Trump said that he may change his mind at some point and interfere with the Special Counsel’s investigation. ” (US Senator Durbin, April 26, 2018) 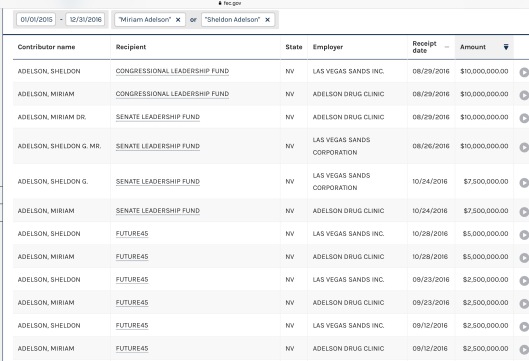 So, is $35 million given to McConnell’s PAC enough to protect their Trump (Future 45) $20 million donation? Plus Sheldon Adelson gave $5 million to the Trump inaugural committee. The second largest donor to McConnell’s PAC seems to be “One Nation”, which is a “dark money” group. It gave $21.7 million to the McConnell Senate leadership PAC according to information found at opensecrets.org, though we only found the $9.2 million at the fec web site.

There is still the mystery of why Trump gave $10,400 to McConnell’s campaign in 2014. What did Trump want from the Kentucky Senator? Did he get it? Or is he connected in some other way? Might Mueller wonder? https://www.followthemoney.org/entity-details?eid=4764641

Sheldon and Miriam Adelson were called to testify by Israel in the Netanyahu corruption case, and they may not wish to testify in a Mueller case.

And, yes, connecting this makes a Russia trail… More generally, there appear to be multiple trails of converging interests with Russian oligarchs and Putin, with this being one.

“Durbin Statement On Committee Passage Of Bill To Protect Special Counsel Investigation 04.26.18
WASHINGTON—U.S. Senate Democratic Whip Dick Durbin (D-IL), a member of the Judiciary Committee, released the following statement after the Committee voted 14-7 to pass bipartisan legislation to protect the investigation of Special Counsel Robert Mueller:
“Senators of both parties have made comments in the press that the Special Counsel’s investigation must be allowed to proceed. We are dealing with a President who has repeatedly attempted to undermine the integrity of that investigation. This measure passed today with strong bipartisan support, which I hope will be noted by the Republican Majority Leader—he should bring this bill to the floor without delay.”

In an interview on Fox & Friends this morning, President Trump said that he may change his mind at some point and interfere with the Special Counsel’s investigation.
-30- ” https://www.durbin.senate.gov/newsroom/press-releases/durbin-statement-on-committee-passage-of-bill-to-protect-special-counsel-investigation-

According to VOA Trump “told the cable show Fox and Friends on Thursday that he’ll “try and stay away” from the Justice Department, but “at some point, I won’t.” https://www.voanews.com/a/senate-panel-votes-to-protect-special-counsel-from-arbitrary-dismissal/4366126.html

“Firing Special Counsel Mueller without cause would violate Justice Department regulations, fly in the face of federal law and represent an incredibly dangerous abuse of power,” Feinstein said.

“The bill we voted out of committee today is another safeguard against such an action by President Trump. I’m glad the bill is bipartisan. Republicans and Democrats alike must stand up and ensure Special Counsel Mueller can continue his investigation without interference. The American people must know the truth, and this bill should now be brought before the full Senate for debate and a vote.”

The bill includes a provision that would allow a special counsel to challenge his or her firing in court. That provision was originally in the Special Counsel Independence and Integrity Act and is designed to protect a special counsel from removal without “misconduct, dereliction of duty, incapacity, conflict of interest, or other good cause.”

The bill approved by the committee also requires special counsels to submit a report to the attorney general and Congress “detailing the factual findings of the investigation and explaining the prosecution or declination decisions reached by the Special Counsel.”

It also requires information about whether the attorney general approved or denied a request by the special counsel to change his or her jurisdiction. The bill’s reporting requirements would occur only upon conclusion of the investigation, not while an investigation is active.”
### https://www.feinstein.senate.gov/public/index.cfm/press-releases?id=55AC4CD1-7671-47E5-9AD9-2604D46302E7

The Water-Gen is simply a giant dehumidifier, so seemingly would further dry air in an arid climate. It would make sense in a humid environment (where you can catch rain or use a dehumidifier and take water from the bucket.)

While the Adelsons want the US Embassy moved to Jerusalem, US Senator Feinstein warns against it:
“Feinstein to President: Reject Calls to Recognize Jerusalem as Israel’s Capital Dec 01 2017 Washington—Senator Dianne Feinstein (D-Calif.) today called on President Trump to reject calls to recognize Jerusalem as the capital of Israel or relocate the embassy from Tel Aviv.

“The future of Jerusalem is an issue that should be decided by Israel and the Palestinians, not unilaterally by the United States,” Senator Feinstein wrote. “Recognizing Jerusalem as Israel’s capital—or relocating our embassy to Jerusalem—will spark violence and embolden extremists on both sides of this debate….” https://www.feinstein.senate.gov/public/index.cfm/press-releases?id=57235715-D1C2-4714-9DC5-92458591582D