“Every record has been destroyed or falsified, every book rewritten….”
George Orwell, 1984, Chapter 5

A fake page of former FBI Director Comey’s book “A Higher Loyalty” appeared on the internet a few days ago, before the book was available to the public. On an apparently pro-Trump reddit thread they call it “satire”, but nothing indicates that it is satire. Rather, the poorly written page is made to appear as a page from the book itself. The appearance of this fake page 173 is reason, alone, to hurry up and buy a copy of the book – a hard copy if possible, because more of these fakes could appear, as a way to counter the book. How to know it’s a fake? Firstly, because it is so poorly and stupidly written, in stark constrast to Comey’s book, which reads like a well-written novel. With the hard copy you can prove that it’s a fake, by turning to page 173. With an ebook you can search key words (see screen shots, further below). You can also download a sample of Comey’s book for free, and if you like it, then purchase it. It seems that any answers found in this book are going to be implicit, rather than explicit, due to the ongoing investigation. The biggest reason to buy the book is that wonderfully relaxing and increasingly rare feeling of reading a well-written book. There is also the risk of losing sleep because you are reading, as happened to many with Harry Potter books, if the entire book is as good as the beginning.

But, first, let’s think about the appearance of this fake page:
“Every record has been destroyed or falsified, every book rewritten….” George Orwell, 1984, Chapter 5,

In George Orwell’s book, 1984: “Winston Smith, is a member of the Outer Party, who works for the Ministry of Truth, or Minitrue in Newspeak. Minitrue is responsible for propaganda and historical revisionism. Smith’s job is to rewrite past newspaper articles, so the historical record always supports the Party’s agenda. The workers are told they are correcting misquotations, when they are actually writing false information in the place of fact. Minitrue also destroys all previous editions of revised work. This method ensures there is no proof of government interference” https://en.wikipedia.org/wiki/Nineteen_Eighty-Four

And, what was going on in Putin’s troll farm?

“Inside the troll factory
On his first day, Bespalov was assigned to cover the war in eastern Ukraine. Sort of. He was told to rewrite articles from other websites for a handful of fake Ukrainian news sites. His task: to change the text in order to give articles the appearance of originality and a distinctly pro-Russian slant.
“We’d switch the word ‘annexation’ of Crimea for ‘reunification,’ or call the government in Kyiv ‘a fascist junta’ while writing favorably about the separatist rebels in eastern Ukraine,” he says…” (“Inside the Internet Research Agency: a Mole Among Trolls“, April 17, 2018 1:42 PM, by Charles Maynes: https://www.voanews.com/a/inside-the-internet-research-agency-a-mole-among-trolls/4352107.html )

Real excerpt from Comey, James. “A Higher Loyalty“, Chapter 1, “The Life.” Flatiron Books, 2018: “The Life of Lies. The silent circle of assent. The boss in complete control. Loyalty oaths. An us-versus-them worldview. Lying about things, large and small, in service to some warped code of loyalty. These rules and standards were hallmarks of the Mafia, but throughout my career I’d be surprised how often I’d find them applied outside of it.”

About Trump’s inauguration, and meeting with Trump after the inauguration, Comey says: “Much of life is ambiguous and subject to interpretation, but there are things that are objectively, verifiably either true or false. It was simply not true that the biggest crowd in history attended the inauguration, as he asserted, or even that Trump’s crowd was bigger than Obama’s. To say otherwise was not to offer an opinion, a view, a perspective. It was a lie.

Two days later, on Sunday, January 22, I attended a late-afternoon reception at the White House for the leaders of the various law enforcement agencies who had provided security and support for the inaugural activities… I was preoccupied about keeping a healthy distance from Trump. So I figured out which way the president would likely enter the room and mingled my way to the opposite end, by the windows looking over the South Lawn toward the Washington Monument. I couldn’t get farther away without climbing out of the window, an option that would begin to look more appealing as time went by….” Excerpt from: Comey, James. “A Higher Loyalty“, Chapter 13, “Tests of Loyalty“, Flatiron Books

By comparing to the above, it is easy to see that the page 173 circulating online is a fake. However, those who do not purchase the book, may not know that it is. It appears to have been meant to be misleading, or it would say “satire” someplace. If the page had appeared after publication, rather than before, the idea that it is “satire” would make more sense, as there would be something to compare to.

An example of satire. Notice that it says “Satire”:
“Satire from The Borowitz Report: “Amazon Apologizes for Shipping Ten Thousand Copies of Comey’s Book to White House” By Andy Borowitz April 12, 2018 https://www.newyorker.com/humor/borowitz-report/amazon-apologizes-for-shipping-ten-thousand-copies-of-comeys-book-to-white-house

Now, on to the fake page 173. Below is part of the page. There is no mention of Gandhi in Comey’s book, as shown below. A search was done for many words and phrases on this fake page and either they don’t turn up, or not in that context. The entire page may be found online at the twitter account listed, and at Reddit.

It’s unclear if the person (?) was taken in by the fake page, or is the source, possibly from Putin’s troll farm? If one knows it’s satire it’s kind of funny. But, if one has read even part of the Comey book, the fake page is offensively bad in comparison. The real Comey book is funnier, and so much more. 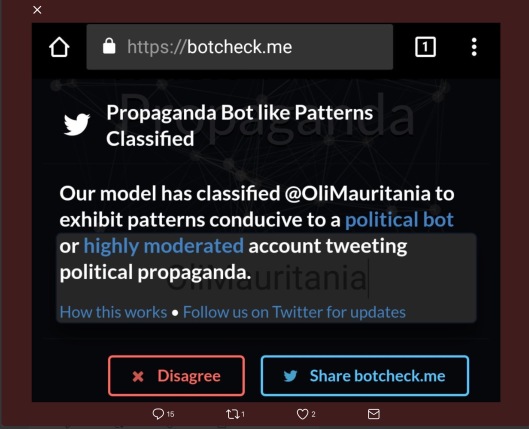 Index from online copy of the real Comey book: 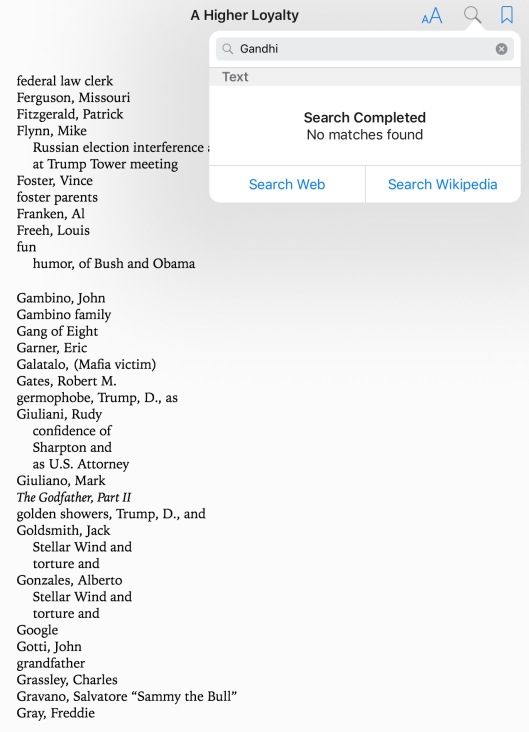