“John Bolton’s consistent, public, and remarkably unashamed response to nearly every international crisis — including Iraq in 2002 and both Iran and North Korea at present — has been to call for war. He will now serve a president desperately lacking in impulse control, judgment, and national security experience.“ (Michael Breen of the Truman Project, as quoted by VOA)

Bolton “recently advocated a first strike on North Korea and pulling out of the nuclear deal with Iran…. Fans of Bolton’s tough talk are rejoicing, however, including thriller novelist Brad Thor.” (VOA-Herman, 22 March 2018). The opinion of a thriller novelist named for the violent hammer wielding god of thunder and lightening (Thor) is supposed to be the standard now?

“John Bolton played an instrumental role in politicizing the intelligence that misled Congress and the American people into going to war in Iraq. He supports proactively bombing Iran, conducting a first strike on North Korea without provocation, and has said, ‘There is no such thing as the United Nations.’ Mr. Bolton has never seen a military conflict he didn’t like. President Trump is endangering the American public by appointing this extreme war hawk as his chief advisor on national security matters.

“With the nomination of CIA Director Mike Pompeo as Secretary of State and now the appointment of Mr. Bolton as National Security Advisor, President Trump is assembling a war cabinet full of ‘yes men’ who will fan his worst impulses. John Bolton has already blundered the United States into one terrible conflict; we cannot let him do it again.” (US Senator Ed Markey)

Even Putin should be worried, since it has recently been revealed that former French President Sarkozy allegedly took a major bribe (around $62 Million US) from Libya’s Gaddafi in 2007, and only a few years later became hell-bent on removing him and was at the forefront of the invasion of Libya and the killing of Gaddafi. Putin may end up trumped, as Mueller closes in and Trump lashes out.

One would think that Bolton would prevent war because just looking at him could make people fall out of their chairs laughing, but this has apparently not been the case. 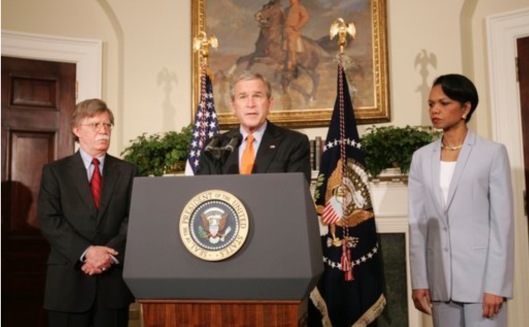 Accompanied by Secretary of State Condoleezza Rice, President George W. Bush announces his nomination of John Bolton, left, as the U.S. Ambassador to the United Nations Monday, Aug. 1, 2005, in the Roosevelt Room of the White House. White House photo by Paul Morse

McMaster is apparently in place until mid-April, which may or may not give some time to save food and water and make whatever plans possible in such limited time. Doing whatever you would like to do before you die is a good idea, though always a good recommendation, anyway, as we can die at any time.

In a tweet Thursday evening, Trump announced that Army Lt. General H.R. McMaster will be succeeded by John Bolton, who is a former U.S. ambassador to the United Nations and currently an analyst on the conservative Fox News Channel.

A White House official said Trump and McMaster “mutually agreed” that the career military officer would resign his post and retire.

“The two have been discussing this for some time,” according to the official. “The timeline was expedited as they both felt it was important to have the new team in place, instead of constant speculation. This was not related to any one moment or incident, rather it was the result of ongoing conversations between the two.”

McMaster said in a statement, “After 34 years of service to our nation, I am requesting retirement from the U.S. Army effective this summer, after which I will leave public service.”

Trump, in his statement released at the time of his tweet, said the career military officer had helped “develop our America First National Security Strategy, revitalize our alliances in the Middle East, smash ISIS, bring North Korea to the table, and strengthen our nation’s prosperity. This work and those achievements will ensure that America builds on its economic and military advantages.”

White House Chief of Staff John Kelly, who is a retired army general, said McMaster had developed options for the president and ensured that those options were presented “fully and fairly.”

Bolton, who also was Under Secretary of State for Arms Control and International Security from 2001-2005, is regarded as a hardliner and interventionist on matters of foreign policy and defense.

He has recently advocated a first strike on North Korea and pulling out of the nuclear deal with Iran.

Bolton “is one of the strongest voices and experts on the full range of national security issues and challenges facing the country,” according to a White House statement.

Bolton has long been a polarizing figure in Washington and there was near instantaneous strong emotional reaction on social media.

President and CEO Michael Breen of the Truman Project, a nonprofit that advocates on national security and foreign policy issues, said in a statement, “John Bolton’s consistent, public, and remarkably unashamed response to nearly every international crisis — including Iraq in 2002 and both Iran and North Korea at present — has been to call for war. He will now serve a president desperately lacking in impulse control, judgment, and national security experience.”

Asked last week whether there might be more changes after five high-profile departures in a two-week period, White House Press Secretary Sarah Huckabee Sanders noted that Kelly had spoken with staff and assured them there were “no immediate personnel changes at this time.”

McMaster is to stay on until mid-April “to ensure a smooth transition,” a White House official said.” Read the original article in its entirety here: https://www.voanews.com/a/donald-trump-national-security-adviser-john-bolton/4312123.html

The John Bolton Super PAC, hugely funded by Robert Mercer gave $337,762 to US Senator Burr, who is supposed to be leading the US Senate Intel Investigation of Trump Russia collusion: https://www.opensecrets.org/members-of-congress/other-data?cid=N00002221&cycle=2016

“Behind the scenes at the State Department, Undersecretary of State John R. Bolton, also closely allied with the Office of the Vice President, pressured both the State Department and the CIA to fire individuals who refused to clear text in his speeches leveling the most extreme charges against other countries. Although Bolton’s actions did not concern Iraq directly, they came to a high point during the summer of 2002—the exact moment when Iraq intelligence issues were on the front burner—and they aimed at offices which played a central role in producing Iraq intelligence.” Excerpted from: “PR Push for Iraq War Preceded Intelligence Findings “White Paper” Drafted before NIE even Requested” , National Security Archive Electronic Briefing Book No. 254 Posted – August 22, 2008, by John Prados Washington D.C., August 22, 2008 – The U.S. intelligence community buckled sooner in 2002 than previously reported to Bush administration pressure for data justifying an invasion of Iraq, according to a documents posting on the Web today by National Security Archive senior fellow John Prados….” https://nsarchive2.gwu.edu/NSAEBB/NSAEBB254/index.htm