Perhaps this should be entitled: “US Nuclear Power Station: Illiterate Workers Sleeping On the Job?” Or “More US Nuclear Exam Cheating – This Time Grand Gulf Nuclear Power Station And Failure To Make Rounds” Or perhaps: “Ya’ll Oughta Go Work At The Nuclear Plant: They Give The Answers To The Exams; You Can Sleep On The Job And They Pay Real Good”

If Russia effectively saying “Whatcha gonna do Theresa (UK Prime Minister), we got the A-Bomb” [1], didn’t have you falling off your chair, maybe this will:

According to the US NRC, at Grand Gulf nuclear workers were told: “the only thing y’all got to do is go out there“. They were given the answers on the exams, or the answers filled in for them; some didn’t do their rounds on the jobs (so they probably were sleeping), and the pay probably is good, especially for the region.

It is almost certain that at least some of these workers are functionally illiterate or perhaps entirely illiterate. Functional illiteracy usually includes numerical illiteracy, which is an especially frightening prospect for a nuclear power station, where correct measurements are essential to public safety. Grand Gulf is the largest single nuclear reactor in the USA.

There was a cheating scandal at the Naval nuclear reactors school a few years ago, and the US nuclear navy appears to be the feeder for the nuclear industry, so this is probably more widespread.

You might not have to wait for Putin and or his client state of North Korea to nuke the USA, there’s Entergy and the rest of the US nuclear industry trying to beat them to it. Worse, Putin wants an exemption to fuel Illinois reactors: https://miningawareness.wordpress.com/2017/04/04/putins-nuclear-fuel-co-wants-exemption-to-fuel-illinois-reactors-with-help-of-exelon-ge-toshiba-hitachi-and-us-nrc/

No one can expect better than this (giving out the exam answers) of either Louisiana or Mississippi, which have competed to have the worst schools for at least half a century, and where there is a massive allergy to reading and books. However, the mystery remains as to why better educated states, especially Massachusetts, let Entergy, based in the Big Easy (New Orleans, Louisiana) buy their reactors (e.g. Pilgrim)?! And, Americans need to be aware that a nuclear disaster at these reactors will have serious environmental and economic repercussions on most of the country – how bad and the exact impacts will depend on the wind direction.

The US NRC doesn’t tell us how many questions were on the exam. 180 seconds is 3 minutes. How many exams were finished in three minutes?

“During an investigation interview, a trainee explained that the proctor would offer directions while standing behind the trainee and looking at the trainee’s selected examination answers on the computer screen. The trainee stated, “Well, she might have came over and stood up and like say, you sure you want to do one like that? That’s the answer right there.” The trainee recalled that the proctor provided this direction for “about three” examination answers.

Based on the evidence, it appears that a former examination proctor deliberately compromised examinations by providing inappropriate assistance to trainees. This appears to have caused the licensee to be in violation of 10 CFR 50.120.
[…]
An investigation was initiated by the NRC Office of Investigations on March 6, 2017, to determine if nonlicensed operators deliberately failed to perform the required operator rounds and if the nonlicensed operators subsequently falsified records to show that they had conducted the rounds. The NRC completed its investigation on August 25, 2017.

Based on the evidence, it appears that the nonlicensed operators deliberately failed to tour all required areas of their watch station and deliberately entered inaccurate information into the operator logs. This appears to have caused the licensee to be in violation of 10 CFR Part 50, Appendix B, Criterion V and 10 CFR 50.9. https://www.nrc.gov/docs/ML1732/ML17325A002.pdf

The Nuclear Navy seems to be a feeder for the NRC and nuclear industry, and the US Navy had people cheating on Naval Nuclear Reactor exams for years – perhaps a decade or longer. No one who is truly bright would choose to train to work with Naval Nuclear reactors, or any nuclear reactors. They may choose to go into the Navy, but not to work with nuclear reactors. Thus, it should not be surprising that there was a cheating ring on the US Naval Nuclear reactor exams. This cheating ring may well have gone on for decades. It may help explain that many in the nuclear industry appear to know nothing, though maybe it’s just their BS degrees in bogus BS fields like Nuclear “Engineering” and “Health” Physics. The Nuclear Navy seems to be a feeder for the NRC and nuclear industry. Where else would they easily find people these days who are supposedly trained in the nuclear field? (Of course, the US DOE is actually giving out scholarships for people to study and perpetuate these bogus fields of study, but the amounts given are too small to provide much incentive.) If they cheated on exams, this could explain why they appear to know nothing. The head of the Nuclear division of the EPRI, utility front group, is an old UK Nuclear Navy man, too. These former Nuclear Navy guys have popped up in the US EPA, US NRC, and appear disproportionately at the fore-front of all things nuclear. A bane they are, for they perpetuate the bane to life itself – nuclear power. Read more about the nuclear navy cheating scandal here: https://miningawareness.wordpress.com/2015/07/11/us-nuclear-navy-cheating-and-the-nrc-nuclear-industry-bane-to-life-itself/

[1] According to the Express: “ Russian Foreign Ministry spokeswoman Maria Zakharova said: “Who does Britain think it is, issuing ultimatums to a nuclear power?” https://www.express.co.uk/news/uk/931249/vladimir-putin-ultimatum-russia-spy-attack-nuclear-power-world-war-3-theresa-may 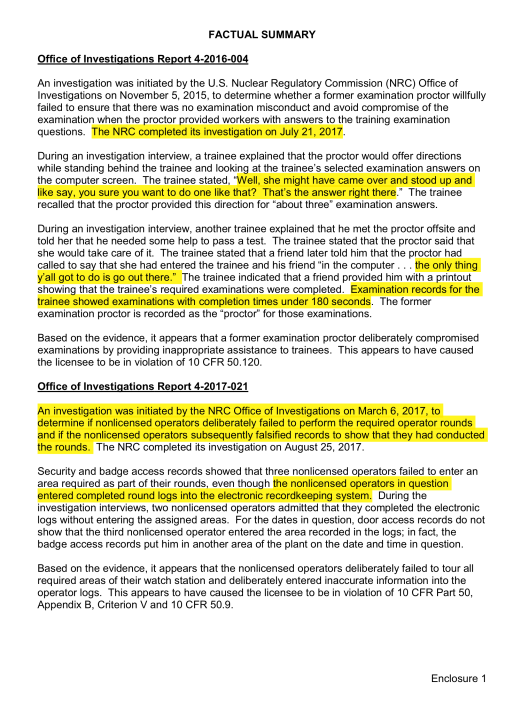 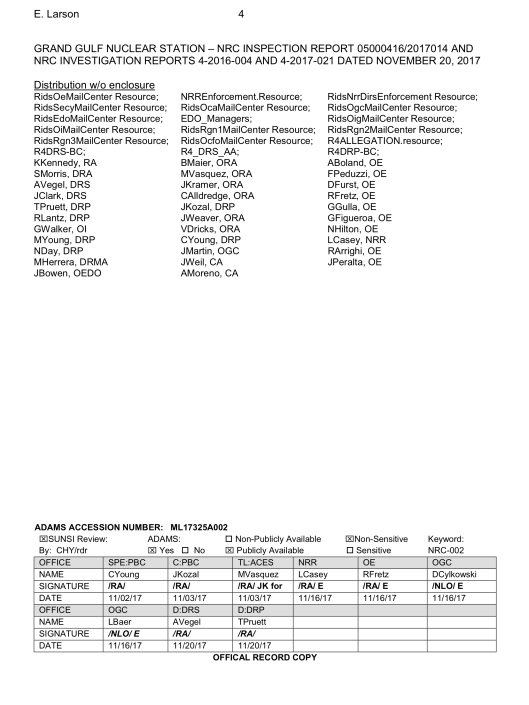 MANY THANKS TO THE LOUISIANA SINKHOLE BUGLE-A READER OF THE BUGLE FOR PROVIDING THE NRC LINK.
https://lasinkhole.wordpress.com