US Senator “Sanders Statement on Banking Bill
Sen. Bernie Sanders (I-Vt.) issued the following statement on legislation up for a vote in the Senate this week that would deregulate large financial institutions:

“Ten years ago, as a result of greed, recklessness and illegal behavior on Wall Street, this country was plunged into the worst economic crisis since the Great Depression. Millions of Americans lost their jobs, their homes, their life savings and their hope for the future. Are our memories so short that we have learned nothing from that disaster?

Unbelievably, at a time of record-breaking bank profits, Congress now wants to deregulate some of the largest financial institutions in America, some of the very same banks that helped cause this financial disaster.

“At a time of massive concentration of ownership in the financial sector now is not the time to deregulate banks that have more than $3.5 trillion in assets and lay the groundwork for another massive financial collapse.

Now is the time to take on the greed and power of Wall Street and break up the largest financial institutions in the country.”https://www.sanders.senate.gov

ALL Republican Senators and 1/3rd of Democratic Senators Voted to Move Forward the Bank Deregulation Bill. 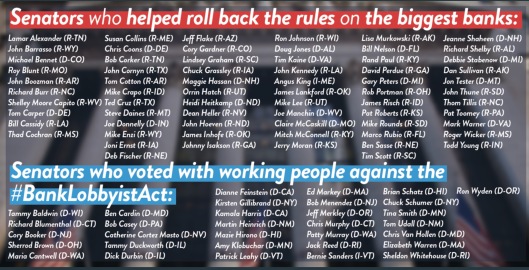