Manafort’s father-in-law’s funeral offers multiple obvious escape options and there are certainly more that additional thought and research could turn up. The funeral could also be a means of transmitting information, devising a future escape plan, or another plot. Manafort apparently still owns an apartment in Trump Tower, but it is far from the funeral, though he might ask to visit it. 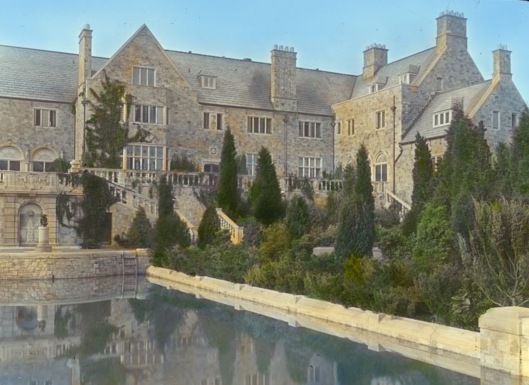 1915 Photo of Killenworth, since 1951 (insanely) a Russian-owned compound on Long Island, New York. The fate of their Norwich House estate near Upper Brookville NY is unclear.

Additional charges were filed against Trump 2016 Campaign Manager, Paul Manafort, on Friday. His colleague-henchman, Gates, pleaded gulity on Friday and will surely testify against him.

Then, suddenly, Manafort’s father-in-law supposedly died in New York, either late Friday or Saturday, and Manafort put in a request with the Court on Saturday to go to the funeral. For anyone who ever taught school, has known a teacher, or is familar with old jokes about student excuses, alarm bells will immediately go off that a con is probably being run. Manafort apparently doesn’t even have GPS monitoring: “The proposed bail package does not provide for a surety who is not a close family member. It does not provide for GPS monitoring. And it does not provide for a fully secured bond of unencumbered real estate.” (Case 1:17-cr-00201-ABJ Document 73 Filed 12/04/17 Page 3 of 4). Even with GPS monitoring there are risks: “It took less than one minute for accused killer David Renz to fool his watchers“: http://www.syracuse.com/news/index.ssf/2013/03/it_took_less_than_one_minute_f.html According to the article, in less than a minute David Renz removed his GPS tracking system and reassembled it and left it. No one noticed for hours. More recently it has been reported that they can be hacked, as well.

The Court should consider this a suspicious death and stop the cremation and order an autopsy of Mr. Bond. While he is-was an elderly man, for him to die at this moment appears suspicious.

From Manafort’s mother-in-law’s obituary we know that Manafort’s father-in-law is Joseph Bond. The obituary of a Joseph Nelson Bond finally appeared online, though Joseph Bond is a fairly common name and they don’t list kin. His funeral is not at the same church as Manafort’s mother-in-law, though it is the same denomination. Her funeral was at Trinity Episcopal Church in Northport (Long Island) and she was cremated. This Joseph Bond’s funeral will be at St. Ann’s Episcopal Church, Middle Road, Sayville, NY (Long Island) and he will be cremated (if he’s really dead). St. Ann’s isn’t far from the Atlantic and it’s on a small waterway. However the funeral home, Raynor & d’Andrea, and church aren’t too far from Long Island MacArthur Airport. It is unclear if Raynor & d’Andrea have an on-site crematorium or not. There is a crematorium near Republic airport on Long Island, however. See Sayville on map just below Long Island MacArthur Airport.

The Mueller team already considered Manafort a flight risk, and on Friday not only were additional charges filed against him, but Gates pleaded guilty and will apparently testify against him.

Paul Manafort is supposed to be under house arrest, but he should be in prison for this reason alone: “As late as November 30, 2017, Manafort and a colleague were ghostwriting an editorial in English regarding his political work for Ukraine. Manafort worked on the draft with a long-time Russian colleague of Manafort’s, who is currently based in Russia and assessed to have ties to a Russian intelligence service….” (Case 1:17-cr-00201-ABJ Document 73 Filed 12/04/17 Page 2 of 4: https://assets.documentcloud.org/documents/4321226/12-4-17-Govt-Opposition-Manafort-Motion-to-Modify.pdf )

How much would it cost the taxpayer to monitor Manafort closely enough? Is it even possible, especially considering his probable mafia ties?

Even those who haven’t seen many movies or read many novels can quickly figure out some of the possible tricks. For instance, if the father-in-law isn’t dead (or even if he is), then they could put Manafort in the coffin and instead of taking him to the crematorium, they could take him to the airport. Or, they could take the father-in-law into the crematorium and let Manafort exit in a casket. It says the cremation is private, so he and his wife could go inside with the body, it would seem. If they ask to spread ashes on the ocean, that offers possibilities of an escape boat – possibly with a helicopter. The trunks of vehicles offer another alternative. If he were to get to the Russian compound then it would presumably be Russian territory, but the airports are closer and could get him definitively out of the country.

Perhaps Manafort could even pretend to be flying to New York, and fly elsewhere.

For instance, there is this house on Long Island which belonged to the late Tamir Sapir. Sapir is linked to Trump through Trump SoHo: http://nordic.businessinsider.com/former-estate-of-russian-billionaire-lists-for-85-million-2017-3 https://en.wikipedia.org/wiki/Bayrock_Group Manafort apparently still has control of his Bridgehampton Estate on Long Island, but the Russian estates are closer to the church than it is.

[Update Feb. 25th, PM: A dim-witted or corrupt judge is reportedly allowing him to go. According to Politico reporter, Josh Gerstein, @joshgerstein‪: “Sunday Manafort updates: In last few minutes, judge says he can go to Long Island for father-in-law’s wake/funeral, sets arraignment on new DC indictment for 9:30 AM Wednesday“, 3:25 PM · Feb 25, 2018 https://twitter.com/joshgerstein/status/967858091957129217
To which BeantownMcJew @AronJ1173 intelligently replied: “‪Someone may wanna make sure Derapaskas plane isn’t “coincidentally” nearby like it was when tRUmp was in Charlotte & Vegas. Or Dmitry Rybolovlev’s state-of-the-art yacht for that matter since that was also “coincidentally” in West Palm over thanksgiving” ‬3:39 PM · Feb 25, 2018 https://twitter.com/AronJ1173/status/967861698127388675 ]

Manafort’s father-in-law reported as dead, but a) he may not be and b) he could have been hastened along. According to the obit, Joseph Nelson Bond was born May 5, 1928 and died February 24, 2018. His funeral is at St. Ann’s Episcopal Church, Middle Road, Sayville. Private Cremation.

Fives Cremation Services is not far from one of the Russian compounds. Long Island Cremation is near Republic airport.

Update a few minutes after publishing: Based on “Sayville Orphan Heroes: The Cottages of St. Ann’s“, by Jack Whitehouse, a Joseph Bond was rector of St. Ann’s from 1922 until 1960, and was almost certainly the father of Manafort’s father-in-law, i.e., the grandfather of his Manafort’s wife. He had a son named Joseph and founded a Boy Scout troop early on. Donations are requested instead of flowers for Manafort’s father-in-law Joseph Bond.