Hungarian Prime minister Viktor Orbán is reported to have done a sudden about-face on Putin and shifted from being an opponent to being a major ally. It has been speculated that Semion Mogilevich – also linked to Trump – had compromising information on Orbán, handed to Putin at the time of Mogilevich’s arrest for suspected tax evasion. Mogilevich was arrested in Moscow on January 24, 2008, and was released on July 24, 2009. Others seem to think that he is simply power-hungry like Putin. (See notes at page bottom) Such a shame too, as Hungary’s such a wonderful country with wonderful people. 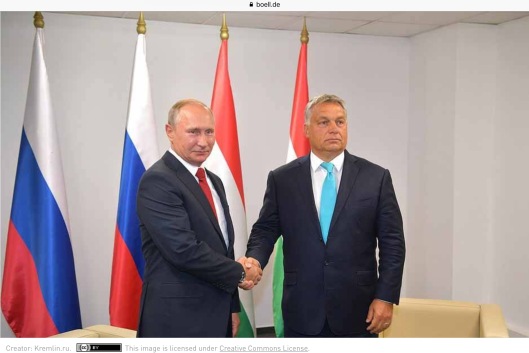 Hungary’s liaison with the Kremlin has turned the economic “Eastern Opening” into the construction of a full-blown illiberal democracy. This goes hand in hand with Russia’s growing leverage over Hungary with respect to economic as well as soft power. 11. October 2017 by Péter Krekó, Lóránt Győri

Mihály Vajda, a renowned Hungarian philosopher[1] recently resigned from his post as Professor Emeritus after the University of Debrecen awarded Vladimir Putin an honorary degree. This event took place during the Russian president’s most recent visit to Budapest and remarkably encapsulates how Hungary’s political right has come full circle from a staunch anti-Russian force after 1989 to an instrument of Kremlin foreign policy since 2010. It is also indicative of the impact Moscow has had on the construction of Hungary’s “illiberal democracy”, first openly endorsed by Prime Minister Viktor Orbán in 2014.

The Russian president made an impromptu visit to Budapest in August 2017, just five months after the annual bilateral meeting with PM Orbán in February. The visit, which was in itself an unprecedented seventh bilateral summit since Fidesz took control of Hungary’s government in 2010, was very much symptomatic of Russian-Hungarian relations and of Russia’s growing leverage over Hungary with respect to economic as well as soft power. Although the Hungarian government officially characterised the visit as a “sports diplomacy event” because the Russian president attended the World Judo Championships in Budapest, Putin was in fact here to cash in on previously negotiated energy deals with the Hungarian government.

Sensing how awkward the visit was being perceived both domestically and abroad, government officials tried to downplay its significance, but official statements from the Kremlin made it blatantly clear that this was a bilateral meeting to discuss the Paks Nuclear Power Plant and the loan that Russia could provide for its expansion. By humiliating Orbán with these contradictory statements, the Kremlin demonstrated just how asymmetrical this relationship really is.

To put it on other terms: Orbán is the tool of Russia. Putin likes the spectacle of an EU member state whose leader (characterised by Sputnik as Putin’s “battling ram against sanctions”) is a harsh critic of Russia’s foes. PM Orbán’s recent speech clearly illustrates this:

“Our fiercest opponents are not the Hungarian opposition parties; they reside abroad. The Hungarian government – and Hungary – can be brought down from Washington, Berlin and Brussels.”

And only since this last visit, the Foreign Minister met once with his Russian counterpart, and travelled to Moscow to discuss long-term gas contracts. There is a high level diplomatic meeting practically every month.

The main result of the talks was Hungary’s decision to finally launch the actual construction of the Paks II nuclear reactors in January 2018. The deal was initially struck in January 2014 during Ukraine’s Revolution of Dignity, and Hungary awarded the construction contract to Rosatom without any international tender and financed by a EUR 10 billion line of credit from Russia. The project had remained on hold, mainly because of EU infringement proceedings.

These obstacles were removed in early 2017, however, so President Putin was eager to ensure that the Hungarian government would make good on the original agreement before the 2018 Hungarian elections. Despite obvious signs that the Hungarian government would like to do the project without the Russian loan, the final loan amount will be EUR 12 billion – larger than originally planned and even larger than the IMF loan Hungary received during the crisis. This demonstrates once again who is calling the shots: Putin is eager to provide the loan and garner the dependence and blackmail potential that comes with it.

Moscow will be pleased to secure a new position in Europe’s rapidly changing energy market, which is making nuclear technology less and less valuable in the face of the green energy revolution. An energy deal such as Paks II will consolidate Russian energy positions for decades, both financially and technologically.

In addition, Hungary is a servile advocate of the further expansion of Russian fossil fuels in Europe. For example, the Hungarian government has reiterated its support for the Turkish Stream pipeline carrying Russian gas to Turkey with a planned extension to Austria. Also, Hungary sticks to long-term gas contracts with Russia despite the warning of experts.

Despite the government’s claims that these projects are mainly about increasing Hungary’s energy security, the Kremlin has already successfully used energy as a political weapon to the benefit of the Orbán government. In 2014, Fidesz managed to achieve a second supermajority thanks to, inter alia, a decrease in household utility costs made possible by a one-time gas price reduction on the part of the Kremlin. Obviously, there are no guarantees that Moscow will not use this energy and loan leverage against any future Hungarian government.

It also sends a strong message to Putin’s European political allies, like the far-right Freedom Party of Austria (FPÖ). FPÖ have entered into a five-year cooperation agreement with United Russia, the ruling political party of the Russian Federation; with significant potential to become a governing party in Austria in the near future, FPÖ’s leaders can expect to be generously rewarded if they are ready to cooperate on energy. Indeed, there is a willingness to cooperate with Russia on energy all over Europe, as is demonstrated by the Nord Stream 2 project, a planned expansion of the Nord Stream pipeline carrying gas from Russia to Germany.

President Putin is also using Hungary to inject himself into transatlantic relations and EU politics with the willing assistance of the Hungarian government. Hungary’s “freedom struggle” against Brussels, its rejection of “forced” European migration quotas, and its persistent rhetorical opposition to sanctions against Russia resonate well in Moscow and underscore divisions in the West. They also strengthen Putin’s narrative of a sovereign, traditional, Christian Russia in contrast to a decadent, failing, weak liberal Europe, unable to withstand Muslim mass migration.

Putin uses these visits as a foreign pulpit to exploit EU cleavages. During his February visit to Budapest, he called for enhanced cooperation on international terrorism and migration. The aim was not only to cast Russia as a desirable international partner ready to bury the hatchet with the rest of Europe over Crimea, but also to place the blame for these issues squarely on Brussels and Berlin, and to exploit controversies surrounding Germany’s accommodating position on refugees and the lack of solidarity among Eastern member states on the quota issue.

Hungary is a voluntary facilitator of Russian soft power

In response, Hungary’s political gestures have far exceeded the scope of the “Eastern Opening” policy initiative, which originally focused mainly on economics and energy. Putin’s honorary degree from the University of Debrecen is the result of a well-crafted application of Russian soft power. In April, the University established a Russkiy Mir Centre with a EUR 50,000 grant to popularise Russian culture, scholarship and nuclear technology.

The Hungarian government also announced another round of state-sponsored renovation for Russian Orthodox churches totalling HUF 2.7 billion (EUR 8.7 million) and is preparing to host a near future visit by Patriarch Kirill of Moscow, a high-ranking bishop in the Russian Orthodox Church. Patriarch Kirill commended Hungary’s government and people for resisting the “Muslim advance”. And the pro-Russian, anti-Western campaign in Hungary is not without consequences: Vladimir Putin is more popular in Hungary, than Chancellor Merkel, and Hungarians see the European Union a bigger threat, than Russia.

Finally, the Hungarian illiberal state and the Russian autocracy are using the same playbook when it comes to NGOs. The Hungarian law adopted in June 2017 listing and sanctioning “foreign-funded NGOs” is modelled after Russian legislation labelling civil society actors as national security threats and even potential terrorists.

Whereas the Hungarian parliament’s National Security Committee did not bother to investigate a Hungarian paramilitary group’s military-style drills with Russia’s military intelligence agency (GRU) on Hungarian soil last year, the deputy chairman of the same committee recently accused three opposition activists (among them theatre director Árpád Schilling and activist Márton Gulyás) of plotting to overthrow the government, and assured the public that “the Hungarian authorities and services are prepared”.

The big brother of illiberalism

Hungary’s liaison with the Kremlin under the Fidesz government has turned the economic “Eastern Opening” into the construction of a full-blown illiberal democracy. Hungary is following in Russia’s footsteps with regard to restricting civil liberties and waging a cultural and legal war against civil society, producing a xenophobic, sovereigntist ideology akin to the “sovereign democracy” concept of the Putin regime. PM Orbán summed up the situation quite succinctly on a conference in January this year:

“Here is Russia, which – let’s be frank – has survived Western attempts to isolate and overthrow the regime, the low price of oil, sanctions, and the internal activity of independent, impartial, allegedly non-governmental organisations void of any outside interference. She has survived all of this, so she is here, and therefore it is not very reasonable – especially in Europe – to disregard the force and opportunity presented by Russia.”

[1] Mihály Vajda was cast as “ideologically ill-suited” after breaking with the Marxism of György Lukács, a Hungarian Marxist philosopher who was one of the founders of Western Marxism. Vajda was consequently fired by the Hungarian communist state in 1973. In 1989, he was rehabilitated and appointed Head of the Philosophy Department at the University of Debrecen, one of Hungary’s leading academic institutions. Vajda came under attack again in 2011 as part of the Hungarian government’s effort to discredit public intellectuals critical of the government.
Tags Hungary Russia Viktor Orbán Putin Energy nuclear energy gas industry Geopolitics soft powerilliberal democracy (Emphasis added) CC-BY-SA: https://www.boell.de/en/2017/10/11/hungary-state-captured-russia https://creativecommons.org/licenses/by-sa/3.0/deed.de

Mining Awareness Notes:
https://en.wikipedia.org/wiki/Semion_Mogilevich
Trump himself has ties, at least indirect, to Mogilevich via Trump Tower Toronto (Shnaider employer and father-in-law, Birshtein) and the alleged mafia protector (Alimzhan Tokhtakhounov) of the gambling ring run, at least in part, out of Trump Tower 5th Ave., and via the Genovese Crime Family (Trump lawyer and friend Roy Cohn represented for them). All of whom were said by the FBI to working with Mogilevich.
https://miningawareness.wordpress.com/2017/03/19/fbi-doc-mogilevich-org-tied-to-tochtachunov-genovese-all-tied-to-trump-at-least-indirectly-mogilevich-org-planned-to-dump-waste-at-chernobyl-too/

This article seems to suggest that Orbán is power-hungry/was corrupted by power/has an authoritarian personality: “Is Hungary the EU’s first rogue state? Viktor Orban and the long march from freedom As a student activist, Orban helped free Hungary from communism. As its prime minister, he practises “illiberal democracy” and praises Trump and Putin“. BY MARTIN FLETCHER, 1 AUGUST 2017
https://www.newstatesman.com/world/europe/2017/08/hungary-eus-first-rogue-state-viktor-orban-and-long-march-freedom The New Statesman article raises this interesting point: “Hungary presently receives €5.6bn a year from the EU to spend on infrastructure, job creation and other projects, but Budapest was plastered with signs this spring bearing the slogan “Állítsuk meg Brüsszelt” (“Let’s halt Brussels”)“.