The Prevezon case appears to have the potential of exposing some really ugly Trump-Russia connections. The Civil case was settled, with suspicious timing, just before going to trial. However, according to Bloomberg there is still a Criminal case underway in the US, and a criminal case was opened in the Netherlands.

On November 7, 2017, Democrats on the US House Judiciary Committee observed that “to date, our members have sent more than forty letters to the Administration asking for information necessary to carry out our oversight of the Department of Justice.  We have not yet received a single meaningful response to any of the letters—including the following, sent directly to the Department”. Included in the list was the letter about the Prevezon case settlement: https://democrats-judiciary.house.gov/news/press-releases/ahead-doj-oversight-hearing-house-judiciary-committee-democrats-put-sessions

According to Bloomberg, “What wasn’t publicly known at the time was that federal prosecutors in Bharara’s old office were continuing a criminal probe into the laundering allegations.” See: “Russia Laundering Probe Puts Trump Tower Meeting in New Light“, By Christian Berthelsen, September 15, 2017, 5:05 AM EDT, https://www.bloomberg.com/news/articles/2017-09-15/russia-laundering-probe-puts-trump-tower-meeting-in-new-light

“Under the terms of the settlement, the U.S. was to lift a freeze on Prevezon’s funds in the Netherlands, and the company was to pay the settlement within 15 days of that. The Netherlands unfroze the money at the U.S.’s request on Oct. 10, but the Netherlands immediately froze the funds again because of a separate money-laundering investigation being conducted by authorities in that country, according to the court filings.” See: “Russian Firm Tied to Trump Tower Meeting Balks at Settlement Payment“, By Christian Berthelsen, October 31, 2017, 2:45 PM EDT Updated on October 31, 2017, 5:49 PM EDT https://www.bloomberg.com/news/articles/2017-10-31/prevezon-dodged-a-trial-now-may-be-dodging-settlement-payment 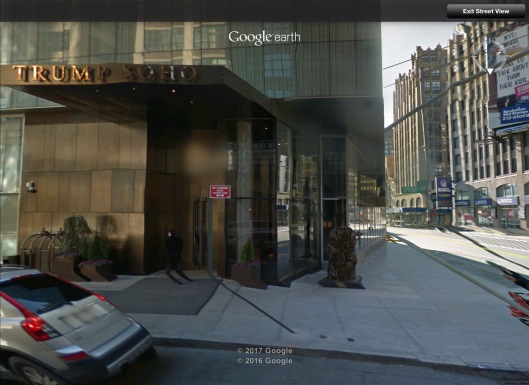 Today, all seventeen Democratic members of the House Committee on the Judiciary wrote to Attorney General Jeff Sessions to request information about his decision to abruptly settle United States v. Prevezon Holdings Ltd, a money laundering case that the Department of Justice (DOJ) abruptly settled that involved Russia sanctions, New York real estate holdings, and the lawyer who met with Donald Trump Jr.

In their letter, the Members wrote, “Last summer, Donald Trump, Jr. met with a Kremlin-connected attorney in an attempt to obtain information “that would incriminate Hillary.”  Earlier this year, on May 12, 2017, the Department of Justice made an abrupt decision to settle a money laundering case being handled by that same attorney in the Southern District of New York.  We write with some concern that the two events may be connected—and that the Department may have settled the case at a loss for the United States in order to obscure the underlying facts.”

“The connections here are too substantial to ignore.  Why was a Russian money-laundering case involving more than $230 million dismissed without explanation?  Why was a central figure in that case chosen to approach the Trump campaign about assistance from the Russian government?  Was the firing of Preet Bharara in any way related to his office’s prosecution of these crimes?  Wittingly or unwittingly, was the Department of Justice involved?

Background: The Prevezon case relates to a massive tax-theft and money laundering scheme uncovered in 2007 by Russian lawyer Sergei Magnitsky.  His 2012 death in Russian custody led to the passage of the Sergei Magnitsky Rule of Law Accountability Act, which enabled President Obama to sanction the Russian officials thought responsible for such human rights abuses.

A 2013 complaint filed in federal court alleged that Prevezon helped to launder more than $230 million stolen from the Russian treasury, largely through high-end real estate in Manhattan.  One of Prevezon’s attorneys was Natalia Veselnitskaya—a lawyer known for lobbying against the Magnitsky Act, and the “Russian government attorney” who met with Donald Trump, Jr. and others to discuss “information and official documents that would incriminate Hillary” on June 9, 2016.  Even Donald Trump Jr.’s alternative explanations for this meeting—he described the discussion, at one point, as “primarily about adoption”—appear to turn on Ms. Veselnitkaya’s efforts to protect her client and undo U.S. sanctions on Russian officials.

On May 12, 2017—just two days before the Prevezon trial was set to begin—the Department of Justice settled the case for less than $6 million and no admission of guilt.  Ms. Veselnitskaya told one Russian news outlet that the penalty was so light that it seemed “almost an apology from the government.”
Issues:  Constitution, Government Oversight, National Security
115th Congress https://democrats-judiciary.house.gov/news/press-releases/judiciary-dems-demand-answers-doj-settlement-fraud-case-handled-russian-lawyer (Embedded links at original)

Remember what happened to Conyers shortly after interviewing Sessions? Conyers, at almost 90 years old, was harassed out of Congress (where he served since ca 1964) and the Judicial Commmittee on allegations of improper behavior. (E.g. staff member was uncomfortable because she suspected he was having an affair with another staff member; he kissed a staff member on the forehead and he held the hand of a staff member. There was also an allegation (s) that he made inappropriate requests.) What happened to due process? Trump-Putin must be thrilled, especially since both are apparently racist against black people.

Full text of the letter to Attorney General Sessions. Emphasis our own. 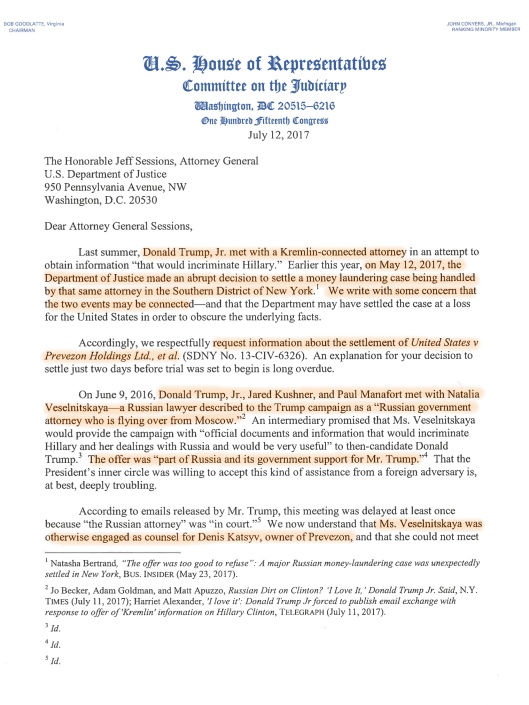 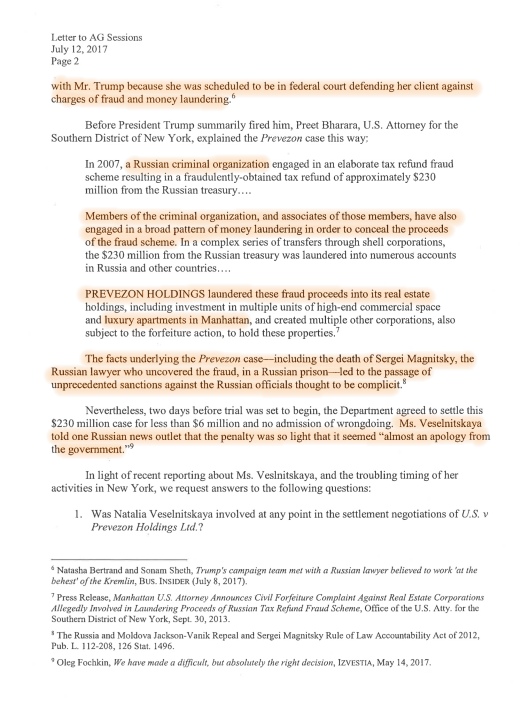