India signing the CSC (Convention on Supplementary Compensation) was pushed for by the US-India Business Council when Indo-American Richard Verma was their lobbyist. It finally was ratified a little over a year after Verma became US Ambassador to India. The CSC went into force initially with Japan signing on and then India. The CSC is supposed to make the US liable for picking up part of the cost of a nuclear disaster in member countries. And, to a lesser extent, India and Japan liable for US accidents. It is supposed to be based on installed capacity so that the US and Japan would pay the most, above a base amount, in the event of a nuclear disaster in any member country. The CSC is an extremely bad deal for India, since they apparently lost the right to sue, and may be a bad deal for America. It is a bad deal for honest vendors. It is a bad deal for Japan-except for their nuclear and uranium-fuel vendors, and is a bad deal for the smaller countries who have signed onto this shoddy deal (e.g. Morocco, Romania, UAE, Argentina). The only beneficiaries of this Convention are those selling defective nuclear equipment(includes fuel), as Russian government owned Rosatom and/or its affiliate companies, have apparently done in India at Koodankulam. Since Russia and France are not members of the CSC they would apparently pay nothing for disasters caused by their defective equipment (Russia’s Rosatom and France’s Areva are both government owned, but are operating internationally as though they were private corporations). https://miningawareness.wordpress.com/2016/12/31/nuclear-convention-on-supplementary-compensation-csc-does-not-protect-people-in-india-or-elsewhere https://miningawareness.wordpress.com/2015/01/28/westinghouse-is-japanese-toshiba-not-american-for-16-years. https://en.wikipedia.org/wiki/110th_United_States_Congress After Trump and Pence are removed from office via impeachment or elections, there needs to be an investigation into this crime. Both Bush-Cheney and the democratic Congress, at the time, appear to be guilty.

“During the Cold War, India and the Soviet Union (USSR) enjoyed a strong strategic, military, economic and diplomatic relationship. After the collapse of the USSR, Russia inherited the close relationship with India, even as India improved its relations with the West after the end of the Cold War… the Indo-Russian strategic partnership has been built on five major components: politics, defence, civil nuclear energy, anti-terrorism co-operationand space….” https://en.wikipedia.org/wiki/India–Russia_relations 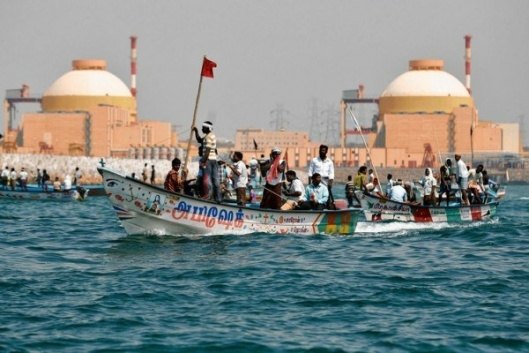 Via Dianuke.org: “CAG Report on Kudankulam Reinforces Civil Society’s Concerns About Safety: EAS Sarma, DECEMBER 28, 2017
E A S Sarma | Former union Power Secretary, Government of India
Comptroller & Auditor General’s 38th Report of 2017 on performance of Kudankulam Units I & II submitted to the Parliament reinforces the concerns of the civil society about the safety of the units.

The 38th report (2017) C&AG on the performance of Kudankulam Units I&II corroborates many concerns expressed from time to time by the civil society on the safety of the units.

The Report points out to enormous delays that occurred in the completion of Units I & II of Kudankulam, to the extent of 86 months and 101 months respectively, partly as a result of delays caused by the foreign equipment suppliers and partly on account of NPCIL’s own delays.

For example, the Report at Para 3.4 states, “Unit I of KKNPP was shut down from 24 June 2015 to 31 January 2016 for 222 days as against the planned period of 60 days. This was due to decision of NPCIL to shut down the plant and execute the refuelling work on its own without evaluating its technical competency”.

The time overruns in the implementation of the project in turn have resulted in enormous cost overruns that impinge on the electricity consumers of the Southern States. To the extent that NPCIL has not provided for such cost escalations, the corresponding burden is imposed on the tax-payer.

In addition, according to the Report, there were several instances of non-enforcement of the provisions of the agreements signed with the foreign suppliers and the costs that have arisen as a result, which further add to the costs borne by the consumer.

There are far more serious concerns highlighted in the Report, which corroborate the concerns of the civil society on the safety of the Kudankulam units.

For example, para 4.2.3 of the Report points to manufacturing defects of the turbine rotors, which is a serious matter. The use of defective components, false certification of their quality and the use of substandard steel have become commonplace in the nuclear industry worldwide and Kudankulam is no exception to it. During the commissioning of the first two units of Kudankulam, on persistent demands from the civil society, especially in the wake of the ghastly disaster that struck the Fukushima nuclear power plant in Japan, NPCIL grudgingly admiited that some parts used in the Kudankulam units were indeed found defective. The latest C&AG report reinforces these fears.

There is a much larger concern that the civil society has expressed all along, that is, about the functional autonomy of the Atomic Energy Regulatory Board (AERB) and the ability of AERB to enforce a stringent safety regime on the Department of Atomic Energy (DAE) to which it is administratively subordinate.

For example, at Para 4.6 of the Report, it is stated that “NPCIL, on 31 December 2014, declared commercial operation of the Unit I of KKNPP which was six months before receiving the license from AERB for regular operation of the plant”. This shows how AERB’s role as a regulator of NPCIL’s activities stood subverted.

In the aftermath of Fukushima, any laxity in the regulator’s role needs to be looked upon as a serious lapse, with the potential of endangering the safety of the people. That such a lapse should be nonchalantly allowed to occur hardly three years after the calamity that took place at Fukushima reinforces the civil society’s fear that DAE and NPCIL have reduced AERB to a mere rubber stamp, thereby making a mockery of the internationally accepted nuclear safety regime.

Immediately after the Fukushima disaster, there ware worldwide concerns for the need to tighten the safety regime applicable to nuclear establishments. C&AG reviewed the performance of AERB at that time and recommended that AERB should be made independent of DAE so that its regulatory authority could be fully maintained. Accordingly, DAE introduced the Nuclear Safety Regulatoy Authority (NSRA) Bill in the Parliament with the ostensible purpose of imparting autonomy to AERB. However. There were many provisions in that Bill that indirectly provided for maintaining status quo, i.e. DAE retaining its overall control on AERB. The Bill was reviewed by the concerned Parliamentary Standing Committee which pointed out several shortcomings and suggested basic changes that would strengthen the proposed NSRA. Several years have elapsed since then but neither the UPA government at that time nor the NDA government for the last three and a half years has cared to incorporate the Parliamentary Standing Committee’s recommendations and set up a truly autonomous regulatory authority for nuclear establishments. This underlines the casualness with which the DAE treats the safety norms laid down by the International Atomic Energy Agency (IAEA) and the priority it accords to creating an independent nuclear regulatory authority.

One can only express the hope that the Parliament considers the latest C&AG Report in some detail, especially against the background of the report submitted by the concerned Parliamentary Standing Committee during the time of the UPA, and persuades the government to hasten the setting up of an independent nuclear regulatory authority and a tighter nuclear safety regime, in addition to persuading the DAE and NOCIL to strengthen its contract management systems.

In the case of Kudankulam and the other imported nuclear power reactors, DAE seems to be adopting non-transparent procedures of equipment procurement, which will result in the nation paying more for the same than what a competitive bidding format would have ensured. C&AG ought to have examied this aspect in some detail.“. CC-BY-NC: http://www.dianuke.org/cag-report-kudankulam-reinforces-civil-societys-concerns-safety-eas-sarma (Emphasis our own.)

“Indo-Russian relations (Russian: Российско-индийские отношения Hindi: भारत-रूस सम्बन्ध) refer to the bilateral relations between the Republic of India and the Russian Federation. During the Cold War, India and the Soviet Union (USSR) enjoyed a strong strategic, military, economic and diplomatic relationship. After the collapse of the USSR, Russia inherited the close relationship with India, even as India improved its relations with the West after the end of the Cold War./. Traditionally, the Indo-Russian strategic partnership has been built on five major components: politics, defence, civil nuclear energy, anti-terrorism co-operationand space.[1] These five major components were highlighted in a speech given by former Indian Foreign Secretary Ranjan Mathai in Russia.[1] However, in recent years a sixth component, economic, has grown in importance with both countries setting a target for US$30 billion in bilateral trade by 2025.[2][3] In order to facilitate this target both countries are looking to develop a free trade agreement.[4][5][6]Bilateral trade between both countries in 2012 grew by over 24%.[6]….. ” https://en.wikipedia.org/wiki/India–Russia_relations