At the center of the Middle East US-Russia nuclear plan appears to be a plan for an oil cartel to drive the price of oil up to $100 per barrel (currently it is in the $50-$60 range). The nuclear Middle East plan involves the major oil producers. Driving up the price of oil would also make their nuclear projects appear more justified, (even though a solar Middle East is a no-brainer). It will make the price of uranium go up too. The nuclear plan also proposes to turn the US government owned TVA into an international corporation apparently along the lines of Russian government owned Rosatom and French government owned Areva-EDF, while including Exelon. They want the Ukraine to give up Crimea in exchange for participation in the project. Below is an excerpt from an email about the project obtained by Reuters from an undisclosed source. Perhaps a leak from the Mueller investigation? At the time of this email, oil was around $40 per barrel, so clearly they weren’t going to wait until it went up to $100 per barrel. They say they Saudi and Qatar are “in go” status, just awaiting Putin and Trump cooperation. Thus, the plan must include a new cartel agreement to drive up the price of oil. This plan excludes Iran, while including the US and Russia. If this were an America-First plan then the US would simply use its own oil and not buy from overseas producers. While it’s bad for the US environment, oil drilling is still occurring it’s just that the land is destroyed and people are getting very little money for it since there’s an international glut! Instead this appears to be an Israel, Saudi Arabia, Russia First Plan, especially as the US will almost certainly get half or more of the nuclear waste.

There are concerns that this plan may not be dead: https://miningawareness.wordpress.com/2017/12/01/us-senator-markey-concerned-about-status-transparency-of-nuclear-cooperation-agreement-discussions-after-report-re-flynns-peddling-nuclear-reactors-in-the-middle-east-trum/

Kushner-Tillerson-Trump and King Salman bin Abdulaziz Al Saud of Saudi Arabia attend the meeting of the Leaders of the Cooperation Council for the Arab States of the Gulf Countries, Sunday, May 21, 2017, in Riyadh, Saudi Arabia. (Official Wh House Photo by Shealah Craighead)

Some of the documents received by Reuters may be found further below. Links to original are in the Reuters report at the top. From April 2015 to June 2016, Trump National Security advisor, Lt. General Michael Flynn, was an adviser for ACU.

As may be seen below, one email, dated November 16, 2016, was entitled “TRUMP/PUTIN ME Marshall plan CONCEPT,” i.e. Trump-Putin Middle East Marshall Plan. November 16, 2016 was the same day that Reuters-Benjamin Mallet reported that “France’s EDF throws Areva a lifeline with reactor deal“: “France moved to shore up its nuclear industry on Wednesday with utility EDF (EDF.PA) agreeing to buy the reactor construction business of state-run peer Areva AREVA.PA for 2.5 billion euros ($2.7 billion).” At the time, Areva was majority owned by the French government with around 4% owned by the Kuwait Investment Authority (KIA).

According to the email, the proposed Trump-Putin Nuclear Middle East “Marshall Plan” was to have a “Super-consortium” composed of the “ACU team“, French Government owned AREVA, and Russian Government owned Rosatom.

IPG was to be the owner of the reactor system and grid. Its shareholders were to be the Gulf Arab States (GCC – Bahrain, Kuwait, Oman, Qatar, Saudi Arabia, and the United Arab Emirates. https://en.wikipedia.org/wiki/Gulf_Cooperation_Council ); Egypt; Jordan and Israel (via ACU Strategic partners)

The so called “requirement” of a minimum $100 per barrel for oil implies the formation of an oil cartel by all of the parties involved. Even France is partial owner of Total, which also owns part of EDF or Areva. How else would oil go up to $100 per barrel considering the glut? Why else would they say that the project allows “the US oil industry to regain momentum”?

It furthermore says that the “project allows a new oil/nuclear relationship between the US/RF and the GCC“. The RF is apparently the Russian Federation and not the Saudi or other Royal Family.

One email indicates that they apparently wanted to swap involvement by Ukraine for Crimea. That is, they would let the Ukraine’s state-owned Turboatom participate if the Ukraine stopped opposing Russia’s takeover of Crimea. 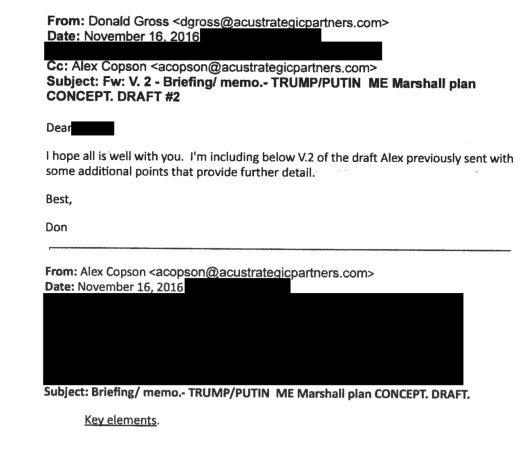 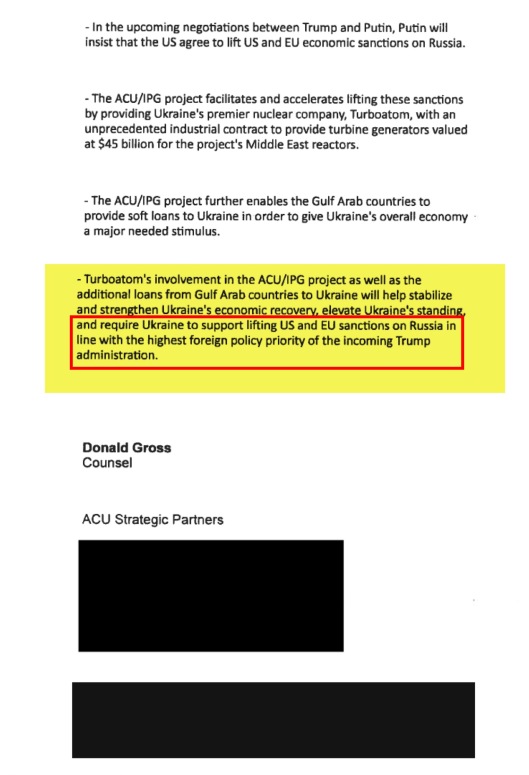 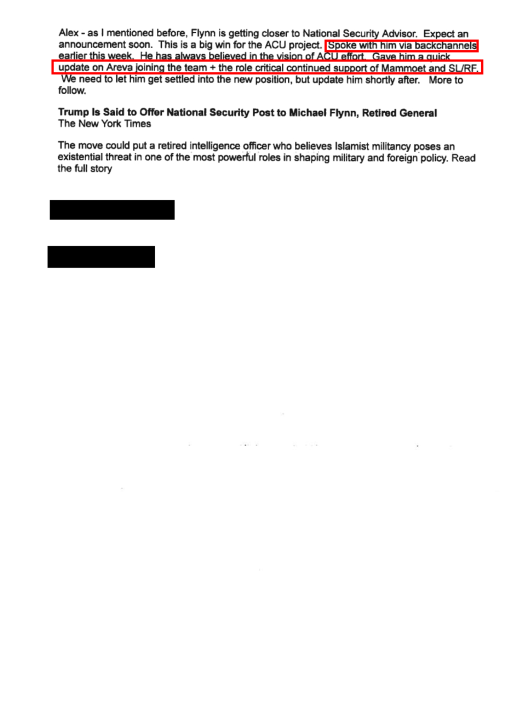 Reuters makes reference to this email, as well as to another written in September. On the last page, Cochran extols the supposed benefits of the project to Congressmen Cummings and Engels. Notice that someone else takes the nuclear waste – either the US or Russia or both. Why would Egypt want a nuclear power station with all energy going to Israel? :

The Reuters article says that on November 30, 2016, “Copson briefed U.S. Representative Ed Royce, Republican chairman of the House Foreign Affairs Committee, on the nuclear project, an email shows. Copson was joined by Jim Hamel, a senior official from Curtiss-Wright Corp., which has a nuclear division based in Royce’s California district and was eager for a role in the multi-billion dollar project.” In a subsequent email, dated December 5th to one of Royce’s aides, “Hamel wrote, ‘We hope that the Chairman will follow-up on Alex’s suggestion to reach out to General Flynn’ to discuss the project.” Reuters says that Royce’s spokesperson, Cory Fritz, confirmed the briefing by email but said that no action was taken.

On Jun 19, 2017 US Congressmen Elijah E. Cummings and Eliot L. Engel, the Ranking Members of the House Committee on Oversight and Government Reform and the House Committee on Foreign Affairs, “sent a letter requesting documents relating to the work of former National Security Advisor Michael Flynn regarding Saudi Arabia, Russia, and other countries, as well as his failure to accurately report his foreign travel and contacts when he submitted an application to renew his security clearance in 2016 and was interviewed by security clearance investigators.” See more here and the letter below: https://miningawareness.wordpress.com/2017/06/20/us-congressmen-raise-concerns-about-flynns-work-on-saudi-russian-nuclear-proposal/
June 19, 2017 Rep. Elijah E. Cummings and Rep. Eliot L. Engel letter re Flynn’s Work on Saudi-Russian Nuclear Proposal 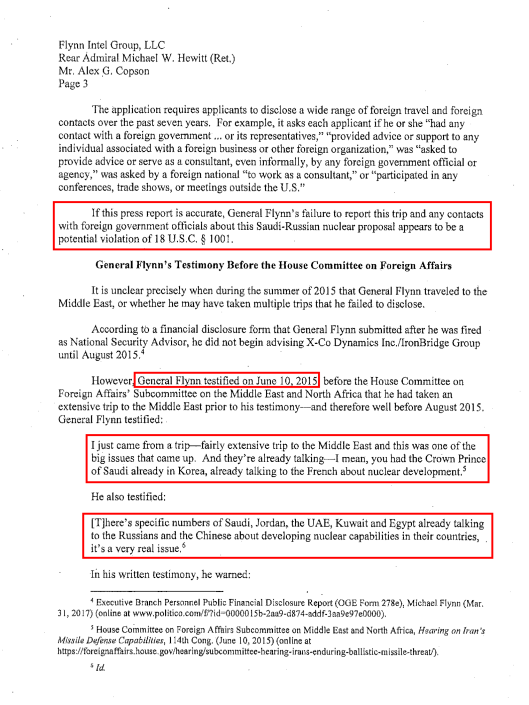 RELATED
Trump didn’t just promise them weapons but the technical know-how/ specifications to make their own smart bombs, etc. https://miningawareness.wordpress.com/2017/06/08/trump-defense-assembly-jobs-for-saudis-technical-specifications-to-saudis-so-they-can-attack-the-us-at-a-future-date-with-smart-bombs-etc-a-few-republican-and-democratic-congress-members-objec/ Trump may want them to have their own nuclear weapons, as well. First Russian Nuclear power stations, and then nuclear bombs. The Newsweek article discusses a Jeff Sessions tie-in, mentioned in the letter.

Update note 2022: Retired U. S. Army Lt. General Flynn has repeated the Russian lie regarding Russia’s invasion of Ukraine, suggesting that either he’s stupid or that he may be in Putin’s pocket after all. Flynn repeated the lie of “Putin’s legitimate security concerns, and legitimate ethnic problems in the Ukraine.” https://www.generalflynn.com/wp-content/uploads/2022/02/2022-GF-Official-Statement-Ukraine-Invasion.pdf Putin has the largest land area in the world, and is nuclear armed. For those Ukrainians who don’t want to learn Ukrainian, then there is plenty of room for them in Russia. Under Flynn’s rationale, large portions of the United States will revert to Spain, and Switzerland will be broken up and its pieces sent to France, Germany and Italy. Only the handful of Romansh speakers would remain. Belgium will also be broken up, etc. Thus, we recant Update note 2021. We again doubt Flynn’s allegiance to the USA, and obviously wouldn’t support him for US President! He’s either too stupid or too tied to Putin to be US President.