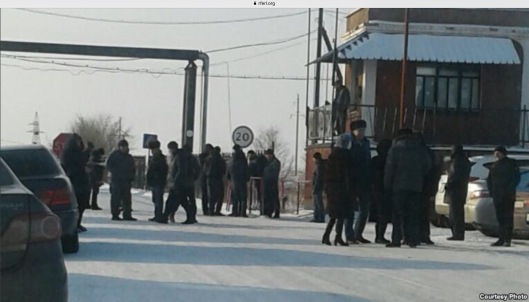 QARAGHANDY, Kazakhstan — The company ArcelorMittal Temirtau (AMT) has filed a lawsuit against hundreds of striking workers who have been underground since December 11 at coal mines in central Kazakhstan, demanding wage increases.

Court officials in the town of Shakhtinsk in Qaraghandy region told RFE/RL that they received the lawsuit on December 14. https://www.azattyq.org/a/28917475.html

AMT, a unit of global metals giant ArcelorMittal, wants the court to rule that the ongoing strike and the activities of the miners’ union are illegal, the officials said.

Meanwhile, colleagues of the striking miners told RFE/RL that more than 700 workers remain underground in several mines in Shakhtinsk.

On December 12, Kazakh Labor Minister Tamara Duisenova said there were 684 miners underground. And regional authorities said early on December 13 that 154 of them agreed to come up after the regional governor, Erlan Qoshanov, met with them underground.

However, the miners’ colleagues and supporters say that only a few miners decided to get out of the mines due to health problems.

Miners who are above ground have been supporting those who remain below, supplying them with food and water. Family members have also brought clothes and other supplies.

The regional governor’s office said that representatives of the miners and their union have been in talks with the local authorities and officials of ArcelorMittal Temirtau.

The region’s authorities and AMT said on December 13 that AMT chief Paramjit Kahlon called on the striking miners to come out of the mines, saying that “the halt of the mines’ operations and unsanctioned remaining underground are not ways to solve the problem.”

AMT officials earlier told RFE/RL that the miners’ main issue was that they wanted their salaries to be doubled and that new contracts had been drafted that meet this demand.

The company said in September that it was negotiating a new collective agreement with steelworkers’ and miners’ unions and planned to sign it before the end of the year.

The miners also want fully paid sick leave and for the retirement age to be set at 50. Other demands include safety improvements and new or upgraded equipment and machinery in the mines.

AMT operates eight coal mines in resource-rich Kazakhstan and produced about 4 million tons of steel in 2016.

Last month, copper miners near the city of Zhezqazghan in the same region also refused to come out of a mine, demanding salary increases and better benefits.

They came to the surface after their employer, KazakhMys, agreed to meet some of their demands.

Critics of authoritarian President Nursultan Nazarbaev accuse his government of applying illegal pressure on labor unions since protests in 2011 by oil workers in western Kazakhstan.

After months of demonstrations, at least 14 protesters were killed by police in the oil town of Zhanaozen on December 16 and 17, 2011.
Copyright (c) 2017. RFE/RL, Inc. Reprinted with the permission of Radio Free Europe/Radio Liberty, 1201 Connecticut Ave NW, Ste 400, Washington DC 20036 https://www.rferl.org/a/kazakhstan-arcelormittal-sues-striking-miners-qaraghandy/28917675.html