” A U-2 reconnaissance photograph of Cuba, showing Soviet nuclear missiles, their transports and tents for fueling and maintenance.” https://en.wikipedia.org/wiki/Cuban_Missile_Crisis

According to Reuters (24 Nov 2017), “Cuba has maintained close diplomatic ties with North Korea since 1960 but is opposed to nuclear weapons“. In the same article Trudeau is said to have expressed concern because the North Korean missiles may pass over Canada. He apparently expressed hope that Cuba would “defuse tensions” between the US and North Korea. Canada and Cuba have long-standing tourism ties.

Rather ironic statement, however, since the USSR wanted to park its nuclear weapons in Cuba during the Cold War. Was Cuba anti-nuclear then? Not! This says that Cuba (i.e. Raul’s brother Fidel) wanted the weapons: “In response to the failed Bay of Pigs Invasion of 1961 and the presence of American Jupiter ballistic missiles in Italy and Turkey, Soviet leader Nikita Khrushchev decided to agree to Cuba’s request to place nuclear missiles on the island to deter a future invasion. An agreement was reached during a secret meeting between Khrushchev and Fidel Castro in July 1962 and construction of a number of missile launch facilities started later that summer.“. https://en.wikipedia.org/wiki/Cuban_Missile_Crisis They must not have taught much history in Trudeau’s school and he wasn’t born yet. Trudeau rêve en couleurs (“dreams in colours”, French Canadian for (optimist) ignoring reality)? Canada has the largest high grade uranium mine in the world, at Cigar Lake, and Trudeau’s father was behind a uranium cartel. But, perhaps even uranium exporters don’t want nuclear fallout raining down upon them. 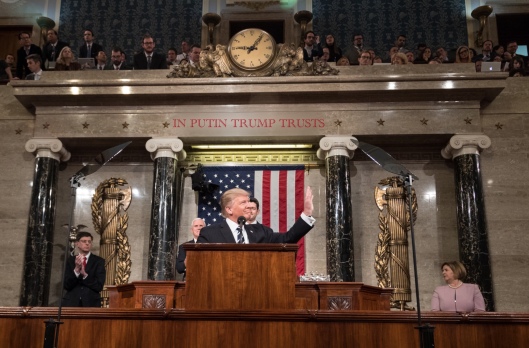 White House photo, “In God We Trust” replaced with “In Putin Trump Trusts”. Notice the fasces on either side, the symbol of Italian fascism. They were in the original photo. Spain uses this symbol too. Was there a message in this White House photo, apart from the one added? Putin’s Russia is a bastardized mix of fascism and Stalinism. Ultimately, all those who refuse to call for Trump’s impeachment are complicit, Democrats, as well as Republicans.

Recall that North Korea and Cuba were both client states of the USSR (Russia) in the past. North Korea is apparently still a client state of Russia. The US is now apparently a client state of Russia, thanks to Trump and to those within the US Congress, not just Republicans, but also Democrats, who refuse to get the impeachment process going. And, whose policies were such that many saw Trump as their only hope. They are complicit. (Hence the US is probably stuck with Trump for the entire 4 years, or longer, for impeachment is slow and it may be too late. )

Thus, this saber-rabbling between Russian client states (US and North Korea) appears to be a bogus diversion. Nonetheless, Latin America’s “Telesur” may be onto something, at least in part, that it’s to create business for the arms industry. While calling out US imperialism, they fail to point out, as usual, that Russia has been doing imperialism since before the United States of America existed. And, that Russia has an arms industry, as well: “The defense industry of Russia is a strategically important sector and a large employer in Russia. It is also a significant player in the global arms market. Russia is the second largest conventional arms exporter after the United States, with $13.5 billion worth of exports in 2012.” The US and Russia together account for well over half (58%) of (legal) international weapons exports. See: https://en.wikipedia.org/wiki/Defense_industry_of_Russia 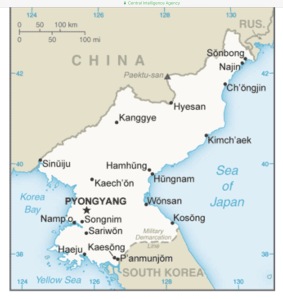 Even though the conflict between the US and North Korea is probably fake, since they are both Russian client states, it could still spin out of control into reality. The leaders of Russia, Germany and the UK were all first cousins, but they fought each other during World War I. It was a very bloody and destructive war.

At first glance at the Reuters article, below, it seemed that Cuba and Canada were both interested in being peacemakers. However, after reading the vitriolic statements in “Telesur”, partially owned by Venezuela and Cuba, as well as some other Latin American countries, and upon re-reading the article, it appears clear that it’s Trudeau that fears North Korean weapons flying over Canada. It may be wishful thinking. Nonetheless, Cuba would get fallout from North Korean nuclear bombs hitting the US and should be concerned too.

“Some diplomats said Cuba was also one of the few countries that might be able to convince North Korea to move away from the current showdown with the United States that threatens war.” https://www.voanews.com/a/cuba-north-korea-reject-unilateral-and-arbitrary-us-demands/4131460.html

No talk here about Imperialist Russia new or old, although Russia’s done imperialism for longer than the US was a country! Why? Probably because Venezuela has accepted huge loans from Russia, with US CITGO as collateral. See: https://miningawareness.wordpress.com/2017/10/01/critical-us-energy-infrastructure-at-risk-from-russia-trump-may-need-to-be-impeached-and-removed-to-protect-it It is also a knee-jerk reaction for them. Weird irony is that now the US is a client state of imperialist Russia.

“Telesur” is probably partially correct that the objective of the US-North Korea saber rattling is to sell weapons. But, that’s true of Russia, as well as the US, as discussed above. It is also a potentially powerful diversion of attention from the crimes of the Trump-Putin Administration(s).

Lenin’s interesting work on “imperialism” is a worthwhile read, though apparently taken from Hobson’s “imperialism” and a work by Hilferding. But, if they don’t (or won’t) understand that Russia was and is an imperialist country, to the extreme, then they haven’t really mastered the theory and are just spouting knee-jerk propaganda to please their Russian masters and each other. Furthermore, Henry Kissinger works for Putin and is close to Trump, making this argument even more absurd.
“Cuba and North Korea Unite Against ‘Imperialist’ US
November 23, 2017 teleSUR / jc-RSF Concern was expressed in relation to the escalation of tensions and military drills taking place on the Korean Peninsula.” https://www.telesurtv.net/english/news/Cuba-and-North-Korea-Unite-Against-Imperialist-US-20171123-0015.html Backing down by the US and South Korea must be at the same time as Russia and North Korea. The US already let Stalin take North Korea for no reason and with no fight.

Telesur ownership includes Venezuela which is currently a client state of Russia, due to large loans given to it: “Telesur (stylised as teleSUR) is a socialist, multi-State funded, pan–Latin American terrestrial and satellite television network sponsored by the governments of Venezuela, Cuba, Ecuador, Nicaragua, Uruguay, and Bolivia that is headquartered in Caracas, Venezuela.” https://en.wikipedia.org/wiki/Telesur_(TV_channel)