A Polish and an Italian Member of the European Parliament asked for written responses, weeks ago, from the EU regarding the Radioactive ruthenium which spread across Europe at the end of September-beginning of October, but have yet to get answers.
“Parliamentary questions
26 October 2017
E-006687-17
Question for written answer
to the Commission
Rule 130
Michał Marusik (ENF)
Subject:  Radioactive ruthenium-106 over Europe

According to information published by the media in recent weeks, radiation has been detected over Central and Eastern Europe.

Elevated levels of ruthenium-106 have been detected in the atmosphere.
In this connection, I would like to put the following questions to the Commission:

1. Is the Commission aware of the presence of radioactive ruthenium in the air over Europe? If so, since when?

2. What action does the Commission intend to take to uncover the source and cause of the emissions detected?

3. Is the presence of radioactive substances a danger to the health and lives of EU citizens?
Original language of question: PL ” http://www.europarl.europa.eu/sides/getDoc.do?type=WQ&reference=E-2017-006687&format=XML&language=EN

Since 29 September, in some regions of northern Italy, France, Austria and Germany, radioactivity has been observed due to the presence of ruthenium-106, a chemical element that is not usually present in the air in significant quantities.

The quantities concerned are limited and do not give cause for immediate public health concern, but nevertheless constitute a significant anomaly in the chemical composition of the air and a potential health hazard for citizens in the areas concerned.

Can the Commission say, within the limits of its competence, whether it is able to provide details concerning the origin and causes of the presence of abnormal concentrations of ruthenium-106 in some areas of Europe in the days after 29 September 2017?

Can it also indicate whether it intends to carry out regular monitoring of the air in the areas affected by the anomaly, in order to establish whether this was a transient phenomenon, and to collect relevant information with the aim of identifying the causes? 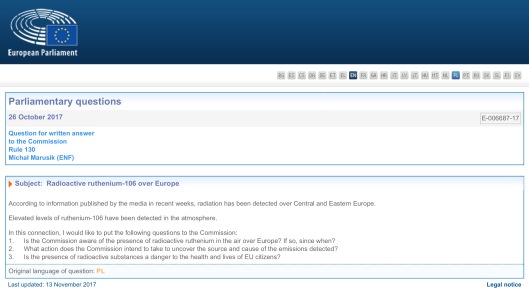