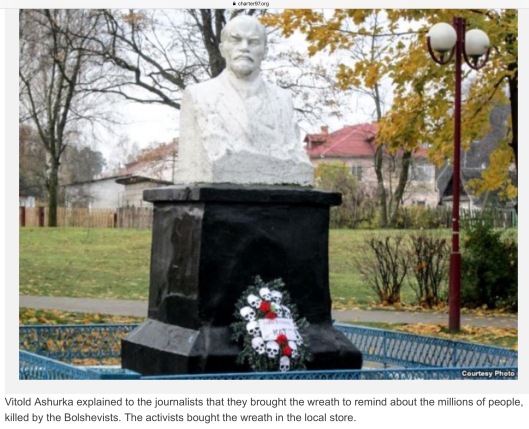 The authorities have sent the police to Vitold Ashurka, to ask him about the meaning of the unusual performance on the eve of November 7.

The police came to Vitold Ashurka’s house yesterday night at about 8.30 p.m. First of all, they asked if it really was him who put the wreath made of painted skulls to Lenin’s monument. Ashurka didn’t deny this but gave no explanations, svaboda.org reports.

“They told me they received documents from Hrodna with the instructions to interrogate me, but as I refused to give explanations, they decided not to insist and left.”

Vitold Ashurka explained to the journalists that they brought the wreath to remind about the millions of people, killed by the Bolshevists. The activists bought the wreath in the local store.

“We decided that such a butcher does not deserve any flowers, so we cut them, down, glued the images of the sculls on it and wrote “Burn in hell, butcher”.

We added some barbed wire to make it more picturesque. The barbed wire is the symbol of Bolshevism,” — Vitold Ashurka said. They also left traditional carnations at the monument“. https://charter97.org/en/news/2017/11/7/268394/
© 1998–2017 Хартыя’97 http://www.charter97.org
The publisher: Charter97.org in Warsaw
https://creativecommons.org/licenses/by/3.0/pl/
Emphasis our own.