“Attacks on journalists and Catalan police reported during anti-independence demonstrations, Incidents also include intimidation of transport workers and damage of TV station van and radio station front door” , 29 October 2017 05:45 PM by ACN | Barcelona
“On Sunday some insults and intimidation attempts from a group of far-right protesters taking part in the march to some Catalan police officers were also reported. The incident took place in Plaça Sant Jaume, outside the Catalan government headquarters, and some footage shows that they were insulting the officers and even throwing them some objects. ‘Long live Franco’, ‘Long live Spain’ and ‘Franco would put you right’ were some of the chants heard….” Read the article here: http://catalannews.com/politics/item/attacks-on-journalists-and-catalan-police-reported-during-anti-independence-demonstrations

“Granting Puigdemont asylum ‘not unrealistic’, Belgian minister says Theo Francken questions that the Catalan president “would get a fair trial” in Spain” 29 October 2017 11:53 AM by ACN | Barcelona” http://catalannews.com/politics/item/granting-puigdemont-asylum-not-unrealistic-belgian-minister-says 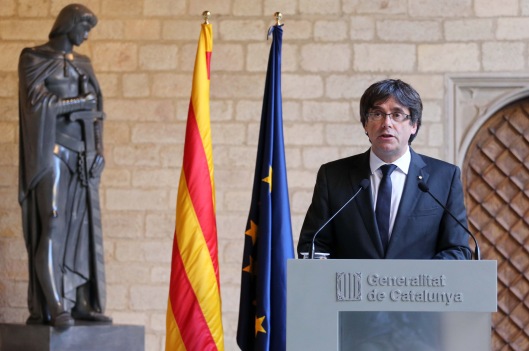 An air of calm settled over Barcelona after hundreds of thousands of Catalans attended a rally Sunday for Spanish unity. The atmosphere of the rally was peaceful, as police helicopters monitored from above.

Amid a forest of Spanish national flags and chants of “Viva Espana,” protesters called for the jailing of Catalan president Carles Puigdemont, who on Friday issued a declaration of independence shortly before the Spanish government stripped Catalonia of its autonomy.

But the calm that followed the rally in the Catalan capital attended by an estimated 300,000 people had the quality of the stillness before a storm. Few are ready to hazard a prediction of how events in Catalonia may unfold in the coming days in a confrontation that has seen intransigence from both sides.

How Madrid starts imposing direct rule Monday on its restive northeast region, and how separatists respond, will determine the next phase in the month-long cat-and-mouse standoff between the politicians in Madrid and Catalan secessionists. Both appear to be banking on the other side tiring like a bull played by a matador.

But fears are growing the perilous confrontation, at times visceral and seamed with past historical grievances including from the era of Gen. Francisco Franco, will degenerate into violence, despite the separatists’ determination to remain non-violent and Madrid’s eagerness not to repeat the national police violence that accompanied an October 1 independence referendum.

Despite the sacking of Puigdemont by Madrid among a raft of direct-rule measures announced Friday, including the dissolving of the regional parliament, Spanish ministers offered an olive branch Sunday by suggesting the Catalan leader is not barred from continuing in politics and even welcomed the idea of him taking part in regional elections Madrid has called for December 21.

“If Puigdemont takes part in these elections, he can exercise [his] democratic opposition,” said government spokesman Íñigo Méndez de Vigo. That suggests the implacable deputy Spanish prime minister, María Soraya Sáenz de Santamaría Antón, a 46-year-old former prosecutor who is charged with overseeing direct rule, is not planning to kick off by arresting Catalan separatist leaders, a move some analysts say would be inflammatory, if it is tried.

Nonetheless, there will be several flash-points in the coming week that could push the confrontation, the worst political crisis to roil Spain since a failed military coup in 1981, down paths neither Madrid nor the secessionists want or could control, say analysts. They worry the type of clashes seen on October 1, when the national police and Civil Guard tried to distort the referendum, will be seen when Madrid decides to enforce direct-rule by closing down Catalonia’s parliament and regional government. “I really will be amazed if we don’t see more of that, sadly,” said Sally Ann-Kitts, a lecturer in Hispanic studies at Britain’s University of Bristol.

“All sides seem to be living in Wonderland,” according to John Carlin, who was fired from his job at the Spanish newspaper El País earlier this month over an article he wrote highly critical of the Spanish government for its response to the independence referendum.

In an article for the London Sunday Times, Carlin argued the biggest risk may come if the idea takes hold “among highly energized independence-seeking youth that they have been the victims of a Franquista coup d’état.”

Another risk is that provocateurs on either side, violent anarchists or hardline Spanish nationalists take advantage of the mess Catalonia is in and organize an incident to provoke a reaction from their opponents. On Friday young Spanish nationalists attacked a Catalan radio station.

As things stand, Catalans will wake up Monday to two rival administrations in their region claiming legitimacy, the Puigdemont-led regional government and an emergency authority staffed by Spanish civil servants and led by Sáenz de Santamaría. On Saturday, Puigdemont defied the fact that he was formally dismissed by the Spanish government and urged Catalans to “defend” the new republic in a televised address.

Separatist leaders and their supporters appear determined to wear Madrid down much as a matador does with a bull by obstructing and resisting the orders issued by Madrid. “The only answer we have is self-defense – institutional self-defense and civil self-defense. I hope Catalans won’t be intimidated by Madrid,” says Abel Escriba, a pro-independence political scientist.

Madrid is banking on Catalonia’s 200,000 public employees and the executives of public companies in the region accepting direct-rule and ignoring the instructions of the Puigdemont-led regional government. Public employee, teacher and firefighter unions have proclaimed their members will ignore Madrid’s instruction.

“We are going to ask them to be professional and to continue to provide services for their citizens,” a Spanish official told VOA last week. The strategy is to be as light-touch as possible as the region is steered to the snap elections in December, which the Spanish Prime Minister Mariano Rajoy is gambling will go against the separatists.

A poll published by El Pais Saturday suggested a small majority of Catalans (52 percent to 43 percent) favor the dissolution of the regional parliament and the holding of the early elections. Fifty-five percent of Catalan respondents opposed the declaration of independence, with 41 percent in favor of secession.” https://www.voanews.com/a/spain-catalonia-separatists/4091148.html

“BEFORE HIS FIRING earlier this month, reporter John Carlin had been a contributor to El Pais, Spain’s paper of record, for nearly 20 years. But the Spanish daily abruptly terminated Carlin, who writes in both Spanish and English, just days after he published an essay in another European paper, The Times of London, sharply criticizing Spain’s king and Madrid’s government….” See: “Spain’s most famous paper stumbles amid Catalonia independence crisis” By Marc Herman, OCTOBER 27, 2017
https://www.cjr.org/business_of_news/catalonia-independence-el-pais-spain.php

One Catalan minister tweeted a picture of himself at work. Keep updated here, though Spain may take over Catalan news agency too: