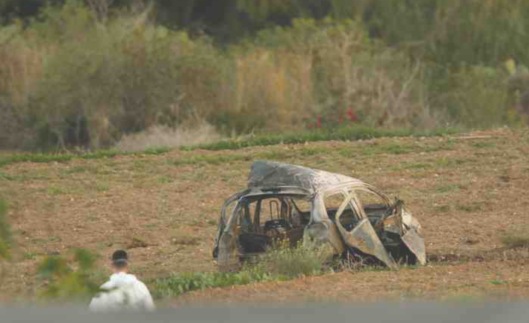 BY STELIOS ORPHANIDES ON OCTOBER 16, 2017
GENERAL
By Chris Scicluna
Daphne Caruana Galizia, Malta’s best-known investigative journalist, was killed on Monday when a powerful bomb blew up her car, police said.

Caruana Galizia, 53, ran a hugely popular blog in which she relentlessly highlighted cases of alleged corruption, often involving politicians from the Mediterranean island of Malta.

Police said she was killed as she was driving near the village of Bidnija in northern Malta. Video showed the burnt-out wreck of her car lying in a field metres from the road.

“I will not rest until I see justice done in this case. Our country deserves justice,” he said in a televised statement, in which he called for national unity.

Malta has a population of 400,000 and is the European Union’s smallest state.

“Everyone knows Caruana Galizia was a harsh critic of mine, both politically and personally, but nobody can justify this barbaric act in any way,” Muscat said. “The only remedy for anyone who felt slandered was through the courts.”

Muscat called early elections in June seeking a vote of confidence to counter Caruana Galizia’s allegations of corruption. She said documents in a small Malta-based bank showed that Muscat’s wife was the beneficial owner of a company in Panama, and that large sums of money had been moved between the company and bank accounts in Azerbaijan.

Both Muscat and his wife denied the accusation and sued Caruana Galizia for defamation. Muscat easily won reelection.

“There are crooks everywhere you look now. The situation is desperate,” she wrote in the last blog published on her site on Monday morning. In another entry last year, she wrote: “Malta’s public life is afflicted with dangerously unstable men with no principles or scruples.”

Malta Television reported that Caruana Galizia had filed a complaint to the police two weeks ago to say she had received threats. It gave no further information.