According to the Catalan Dept. of Health update on 2 October 10.59 am, in relation to injuries sustained during the referendum due to Spanish police (violent) charges, as of 10 am there had been 893 injured badly enough to require medical care, four were still hospitalized, of which two remained in serious condition: http://premsa.gencat.cat/pres_fsvp/AppJava/salut/notapremsavw/303473/ca/actualitzacio-del-departament-de-salut-en-relacio-les-persones-que-han-rebut-assistencia-sanitaria-durant-el-referendum-2-doctubre-10-hores.do 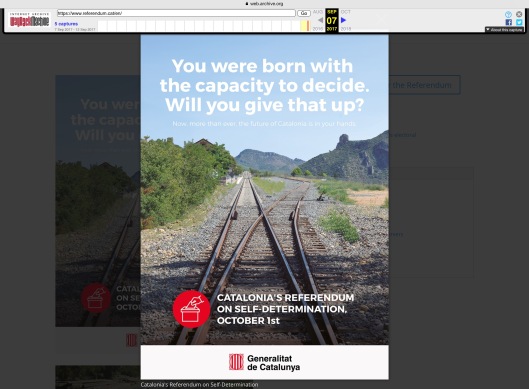 If this referendum is not legally binding under Spanish law, and if only a minority were supportive of independence before the Spanish police crackdown, why then the police crackdown and violence? It is a crackdown on freedom of expression. No surprises that the Spanish PM Rajoy’s political party was created by fascists:

“The People’s Party was a re-foundation in 1989 of the People’s Alliance (Alianza Popular, AP), a party led and founded by Manuel Fraga Iribarne, a former Minister of the Interior and Minister of Tourism during Francisco Franco’s dictatorship.”

“AP was born on 9 October 1976… Out of the seven founders the first 6 had held cabinet-level offices during the dictatorship of Francisco Franco. The odd one …. had also been part of the Francoist administration… Fraga… made a turn towards Neo-Francoism.” [1]

“Comment by the UN High Commissioner for Human Rights Zeid Ra’ad Al Hussein on the situation in Catalonia, Spain GENEVA (2 October 2017) – I am very disturbed by the violence in Catalonia on Sunday. With hundreds of people reported injured, I urge the Spanish authorities to ensure thorough, independent and impartial investigations into all acts of violence. Police responses must at all times be proportionate and necessary.

I firmly believe that the current situation should be resolved through political dialogue, with full respect for democratic freedoms.

I call on the Government of Spain to accept without delay the requests by relevant UN human rights experts to visit.
ENDS” http://www.ohchr.org/EN/NewsEvents/Pages/media.aspx?IsMediaPage=true

About the referendum vote posters and other information from the Catalonia government:

Video which was also purged from the web site: http://youtu.be/s8_BqpeUydo
“The Administration allows the reuse of the content and the data freely for everyone without time limits or restrictions beyond those of the basic terms and conditions laid down in article 8 of the Law 37/2007 (mention of source, non-alteration or distortion of information and specification of date of last update), and so long that it does not contradict any license or notice that a work may hold“.http://web.gencat.cat/en/menu-ajuda/ajuda/avis_legal/index.html