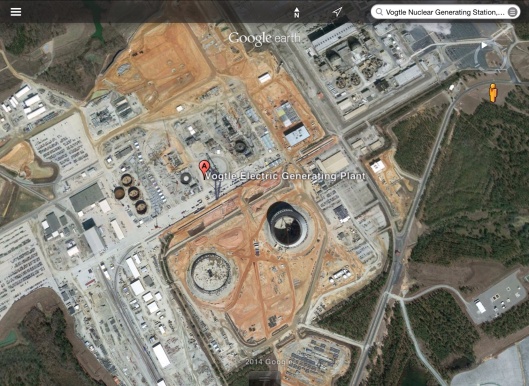 New Vogtle reactors as saved from Google Earth in Oct. 2014 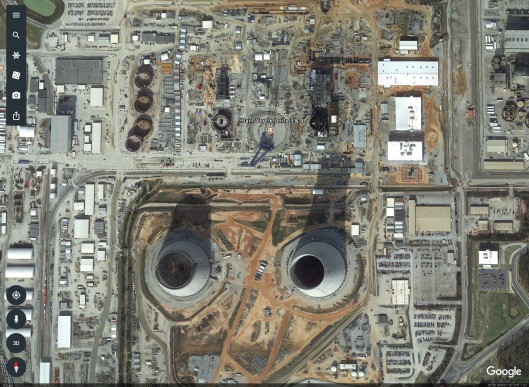 New Vogtle Reactors as saved from Google Earth 29 Sept. 2017
What happened to Free Enterprise Capitalism as opposed to Stalinist-style State Capitalism and Fascistic State Subsidized Capitalism? While France and Russia are frequently following Stalinist and quasi Stalinist models with the state unfairly acting as capitalist even on the international level (e.g. Areva and Rosatom nuclear), the US-Japanese nuclear industry is operating as fascistic state subsidized capitalism. With Bombardier, the Province of Quebec has lurched from state subsidized capitalism to direct investment where Quebec is partial owner of Bombardier and now acting as a state capitalist.

Why are US mainland nuclear utilities getting low interest loans on a project with a very high risk of default, whereas Puerto Rico and its electric company must get loans at usurious rates?

Even with gross subsidies, the nuclear industry is not viable. Toshiba owned “Westinghouse Electric Company filed for Chapter 11 bankruptcy protection Wednesday, saying it needed to restructure because of “certain financial and construction challenges” from its nuclear power plant projects.” http://www.voanews.com/a/westinghouse-chapter-11-bankurptcy/3786377.html

The U.S. Department of Energy (DOE) is giving another $3.7 billion in loan guarantees for two new nuclear reactor units under construction at the Vogtle nuclear power station in Georgia, USA. Thus, the US will have thrown this project which is at least 5 years behind and almost $11 billion over budget a total of $12 billion in loan guarantees, as well as some additional subsidies. Because of the loan guarantees the interest rate is lower and the US taxpayer will pay if the companies default.

According to the US Congressional Budget Office, 41% of the private nuclear power stations started in the 1960s and 70s were canceled and almost all had significent cost overruns which were borne by ratepayers, the US government, and equity holders.

Meanwhile, the Puerto Rico electric company (owned by the govt of PR) announced plans to increase electricity rates by 28 % to help pay for usurious loans. They must pay debt service on as much $9.3 billion in new bonds that they are issuing to replace its old debt. And, “the new bonds will pay an astounding interest of 10 percent“. (See Amy Goodman, DemocracyNow.org, republished here: https://miningawareness.wordpress.com/2017/09/27/puerto-ricos-payday-loans-the-shocking-story-behind-wall-streets-role-in-debt-crisis )

Georgia power’s cost estimate for completition of the Vogtle 3 and 4 nuclear power station is $25.2 billion, making it $10.9 billion over budget and 5 years behind schedule. MEAG will actually have some of the interest for project loans paid by the US government. See: http://www.taxpayer.net/library/article/doe-loan-guarantee-program-vogtle-reactors-34

The US government CBO (Congressional Budget Office) has warned that 41% of the privately owned nuclear power stations plants in the United States that were started in the 1960s and 1970s and for which data were available were canceled, and “almost all of them experienced significant cost overruns… Losses for the most part were borne by the projects’ equity holders, the regions’ electricity ratepayers, and the government,…” http://www.cbo.gov/sites/default/files/cbofiles/ftpdocs/122xx/doc12238/08-03-nuclearloans.pdf

On Friday, 29 Sept 2017:
“WASHINGTON, D.C. —To further support the construction of two [NOT] advanced nuclear reactors at the Alvin W. Vogtle Electric Generating Plant, U.S. Secretary of Energy Rick Perry announced today conditional commitments for up to $3.7 billion in loan guarantees to Vogtle owners: $1.67 billion to Georgia Power Company (GPC), $1.6 billion to Oglethorpe Power Corporation (OPC), and $415 million to three subsidiaries of Municipal Electric Authority of Georgia (MEAG Power). The Department has already guaranteed $8.3 billion in loans to GPC, OPC, and MEAG Power subsidiaries to support construction of Vogtle Units 3 and 4. ‘I believe the future of nuclear energy in the United States is bright and look forward to expanding American leadership in innovative nuclear technologies,” said Secretary Perry. “Advanced nuclear energy projects like Vogtle are the kind of important energy infrastructure projects that support a reliable and resilient grid, promote economic growth, and strengthen our energy and national security’….”
https://energy.gov/articles/secretary-perry-announces-conditional-commitment-support-continued-construction-vogtle

IF THE FUTURE OF NUCLEAR WERE GOOD IT WOULDN’T NEED $12 BILLION IN SUBSIDIZED LOANS. THE ONLY BRIGHT FUTURE IS THE RADIOLOGICALLY AND CHEMICALLY POISONOUS RADIUM BY-PRODUCT OF URANIUM MINING THAT THE US ALLOWS URANIUM MINERS TO SPRAY ON THE LAND IN “LAND APPLICATION”, WHICH GLOWS IN THE DARK! 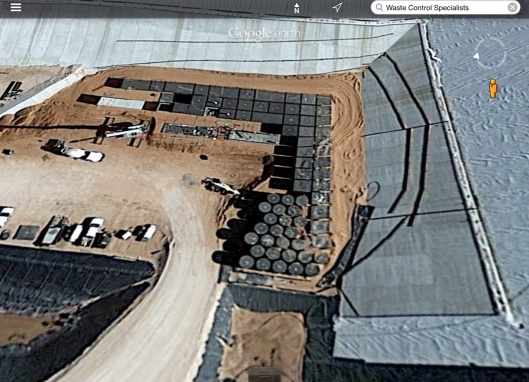 Waste Control Specialists Nuclear Burial Ground
Current US Energy Secretary Rick “Perry also privatized a state-run, low-level nuclear waste facility, turning it over to Waste Control Specialists, a firm owned by a major campaign contributor. Then he let the corporation double the amount of waste dumped there, while reducing its legal liability for damages. Finally, after taking even more cash from the owner, Perry pushed to let him put high-level nuclear waste in the dump“. (“Crony Capitalism Made Rick Perry Our Energy Secretary“, By Jim Hightower, DECEMBER 21, 2016, OtherWords. org, republished here: https://miningawareness.wordpress.com/2017/01/23/crony-capitalism-rick-perry-us-energy-secretary-former-texas-governors-experience-for-the-job-comes-from-stiffing-the-american-people-and-their-environment)

The US taxpayer could end up losing billions due to the Federal loan guarantees facilitated by a Republican Congress in 2005, and handed over by Obama, the former head of the US Dept of Energy, Ernst Moniz and now Trump and Rick Perry.

Meanwhile, Trump’s 2018 budget earmarks millions for interim storage, which will benefit at least one of his fundraisers and large donors.

The point of these nuclear power stations was clearly to keep the steel industry, concrete, and the construction industries in business. Why not invest in infrastructure? Probably because people know how much it costs, whereas nuclear power stations have rarely been built and have always been characterized by huge cost overruns, construction delays, and excuses. The same sort of contractor feast applies for nuclear waste.

Glenn Carroll of Nuclear Watch South worked very hard to warn people and to stop this folly, but has been largely ignored: “Nuclear Watch South Coordinator Glenn Carroll articulated the group’s position in a brief statement: “Georgia’s legislators and Public Service Commissioners enabled Georgia Power to obtain $2 billion in up-front charges from its customers which has increased Georgia Power’s profit margin by over 20% in the Vogtle construction years.

“Vogtle owners have borrowed another $8.3 billion of U.S. taxpayer money from the U.S. Department of Energy (DOE). It is unclear how the money can be paid back since it is increasingly likely that Vogtle will not ever be built, but, at a minimum, Georgia Power should not be allowed to keep its windfall profits at the public’s expense.

“A full investigation and accounting needs to be done as to where this mind-boggling amount of public money has been spent with so little to show for it as Vogtle is still only 36% finished after six years under construction.

“As the revelations unfold of how breathtakingly out-of-touch several large multinational companies are with their own operations, purchases, and accounting, we are very lucky that these inept actors were unsuccessful in placing their product, two colossally dangerous radioactive waste factories, in the Georgia landscape.

“It is time to stop wasting time, energy and money on Vogtle 3 & 4 which aren’t needed anyway. Our renewables future is close at hand. It is time to get on with it.” Read the timeline and more here: http://www.nonukesyall.org/Vogtle.html

The US government CBO (Congressional Budget Office) warned of the problem in 2011 well before the initial $8.3 billion loan guarantee: “…historical experience suggests that investing in nuclear generating capacity engenders considerable risk. One study found that of the 117 privately owned plants in the United States that were started in the 1960s and 1970s and for which data were available, 48 were canceled, and almost all of them experienced significant cost overruns.4 / As a consequence, most of the utilities that undertook nuclear projects suffered ratings downgrades—sometimes several downgrades—during the construction phase.5 However, bondholders experienced losses from defaults in only a few instances. Losses for the most part were borne by the projects’ equity holders, the regions’ electricity ratepayers, and the government. Supporters of nuclear power argue that newer plant designs and changes in the regulatory environment make nuclear investments less risky now, but recent experience abroad suggests that cost overruns and delays are still common phenomena,…”

Already in 2011, “General Electric and its Japanese partners, Toshiba and Hitachi, are about five years behind schedule on two reactors being built in Taiwan, costing an extra $4 billion to $5.5 billion.“ http://www.cbo.gov/sites/default/files/cbofiles/ftpdocs/122xx/doc12238/08-03-nuclearloans.pdf

“Under title XVII of the Energy Policy Act of 2005, the Secretary of Energy, in conjunction with the Secretary of the Treasury, is authorized to provide loan guarantees for qualifying energy projects… Among the types of projects meeting those criteria are … nuclear reactors.”

“Westinghouse Bankruptcy Underscores Meltdown of the Global Nuclear Industry: The board of Westinghouse’s parent company, Toshiba, today approved the filing of Chapter 11 bankruptcy for its drowning U.S. company – a defining moment in the decades-long downward spiral of the global nuclear power industry.” http://www.greenpeace.org/international/en/press/releases/2017/Westinghouse-bankruptcy-underscores-meltdown-of-the-global-nuclear-industry—Greenpeace/

Now up to $12 billion US taxpayer money may be lost. If they sell it, who would buy it? It is bad economics so most likely any purchase will be geostrategic. It could be Russia’s Rosatom, controlled by the Executive (i.e. Putin), or possibly the UAE or perhaps Kazahkstan (Kazatomprom). Maybe a China State owned company or KEPCO. These last have their own reactor designs. Rosatom offered to help bail out French State owned Areva. 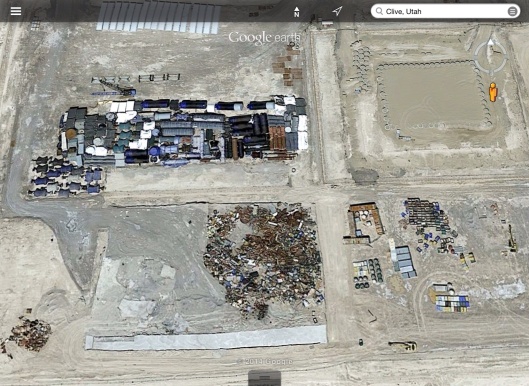 Rural areas of Puerto Rico should be eligible for this: https://www.rd.usda.gov/programs-services/electric-infrastructure-loan-loan-guarantee-program