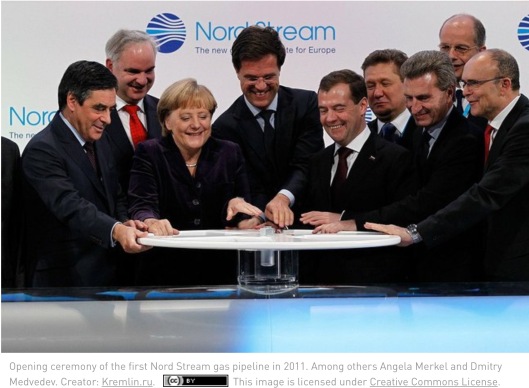 Putin’s preferred outcome must be an outcome which excludes the German Green Party, because the Greens support EU sanctions against Russia and they want to stop Nord Stream 2 pipeline. The status quo “Grand Coalition” of CDU/CSU-SPD is good for Putin, as explained further below.

It is worth recalling that Angela Merkel (CDU) spent 36 years of her life in Communist East Germany and that either Warnig or Putin or both could have compromising information on her with which to exert control.

Former Chancellor of Germany (SPD), Gerhard Schröder, is chairman of the board of Nord Stream 2.

As a Danish MEP points out: “the construction of Nord Stream 2 will make it possible for Russia to cut off Ukraine completely from vital gas supplies, will be a massive geopolitical advantage for Russia, will increase Europe’s dependency on Russian gas and will effectively keep Europe dependent both on fossil fuels and on energy supplies from countries with which we have strained diplomatic relations” (Jeppe Kofod, MEP Denmark, 27 March 2017)

“The [European] Commission has stated publicly on several occasions that it considers the Nord Stream 2 project is not in line with the policy objectives of the Energy Union as it will not give access to a new supply source, it could allow a single supplier to further strengthen its position on the European Union gas market and it could lead to a concentration of supply routes” (European Commission response, May 2017).

“Why Vladimir Putin isn’t worried about the outcome of the German election He’s already winning,” points out Boris Reitschuster, September 22 at 13:22 CT: https://www.washingtonpost.com/news/democracy-post/wp/2017/09/22/why-vladimir-putin-isnt-worried-about-the-outcome-of-the-german-election The above article raises the issue of the cyber attack two years ago on the German Parliament and says that  the attackers could have “harvested plenty of “kompromat” they could use to muddy the waters of the campaign./Yet so far that hasn’t happened — at least not on the expected scale.” But, maybe it has! Maybe there have been threats to release the information is one reason why “Putin may not have felt the need to unleash his full propaganda arsenal” and not simply because “The Russian corruption of German elites is well advanced“, as Reitschuster points out. Putin and Warnig may have already had enough compromising information on older politicians from their KGB-Stasi days.

Excerpted from “Who is Putin’s candidate of choice in the Bundestag?”
2017/09/22 – 17:02, Article by: Maxim Kireev Translated by: Oleg Friesen for http://euromaidanpress.com (originally published at ostpol. de, the online magazine for border crossing journalism by n-ost ):

“The worst option for Moscow would be a Jamaican coalition of CDU/CSU, Greens, and FDP.

The Greens are considered to be the most critical party of Russia in Moscow. Not only because they are consistently advocating for maintaining EU sanctions against Moscow, but also because they want to stop Russia’s second Baltic Sea pipeline, Putin’s most important project in Germany. If Green Party leader Cem Özdemir becomes Minister of External Affairs after the election, it would be a very unpleasant surprise for Putin.

The best result for Moscow would be a further relaunch of the Grand Coalition. In Moscow, the SPD is considered to be the party with which one can do business best. Angela Merkel, too, demonstrated her willingness to take a moderate stance on the recent US sanctions against Russia.

The Grand Coalition also supports Nord Stream 2. From a Russian perspective, maintaining the political status quo in Germany would be the best possible outcome of the election…“© EUROMAIDAN PRESS When referencing our materials, please include an active hyperlink to the Euromaidan Press material and a maximum 500-character extract of the story“, Emphasis our own, read the entire article here: http://euromaidanpress.com/2017/09/22/who-is-putins-wish-candidate-for-the-bundestag/

Coalition colors of green, black and yellow are the same as the Jamaican flag: https://en.wikipedia.org/wiki/Jamaica_coalition_(politics)

“In 2015, the Russian energy supplier Gazprom agreed with E.ON, Shell, Engie, BASF/Wintershall and OMV that the Nord Stream pipeline was to be expanded in order to deliver more gas to Germany from Russia…. Even though the first two lines are only running to 70 per cent capacity at present, the Nord Stream 2 project is intended to supply a further 55 billion cubic metres of gas to Germany every year. The company New European Pipeline AG was set up for this purpose. It is registered in Switzerland, outside the European Union, and Gazprom owns 50 per cent of its shares… Gazprom already has a market share of about 40 per cent in Europe, making Russia by far the biggest supplier of gas to the EU.” “Nord Stream 2 – not a Private Matter” Apr 22, 2016 by Annalena Baerbock, Oliver Krischer, Dr. Anton Hofreiter, Marieluise Beck, Bärbel Höhn, Dieter Janecek, Omid Nouripour, Manuel Sarrazin, Dr. Julia Verlinden: https://miningawareness.wordpress.com/2017/09/13/nord-stream-2-not-a-private-matter/

“Most people believe that no one in Germany has as close and cordial a relationship with the Russian president as former chancellor Gerhard Schröder. But that is not entirely true./ Warnig’s acquaintance with Putin dates back further than Schröder’s,…. Warnig meets up with Putin much more often than Schröder… Warnig is a regular at the Kremlin. The two men see each other “generally every three weeks”, sources in Moscow say.” See: “Circles of power: Putin’s secret friendship with ex-Stasi officer” by Dirk Banse, Florian Flade, Uwe Müller, Eduard Steiner, Daniel Wetzel Wednesday 13 August 2014 10.04 BST, Last modified on Wednesday 12 April 2017 15.25 BST, https://www.theguardian.com/world/2014/aug/13/russia-putin-german-right-hand-man-matthias-warnig

The Stasi was the official state security service of East Germany (DDR) and “has been described as one of the most effective and repressive intelligence and secret police agencies to have ever existed…“ https://en.wikipedia.org/wiki/Stasi

The Dresdner Bank’s relationship with Russian President Putin is said to go back to when “Dresdner Bank attempted to get a banking operating license in Saint Petersburg, where former KGB agent Vladimir Putin was in charge of foreign economic relations. Dresdner Bank appointed Matthias Warnig, a former Stasi agent and Vladimir Putin’s former KGB contact, to negotiate with Putin. The office was opened in 1991.[6][7] Warnig became Chairman of the Board of Directors of Dresdner Bank ZAO, Dresdner Bank Russian subsidiary.” http://en.wikipedia.org/wiki/Dresdner_Bank Putin lived in Germany and knows German. In fact, he lived in Dresden, where this bank got its name and its start: “From 1985 to 1990, the KGB stationed Putin in Dresden, East Germany. During that time, Putin was assigned to Directorate S, the illegal intelligence-gathering unit (the KGB’s classification for agents who used falsified identities) where he was given cover as a translator and interpreter“.http://en.wikipedia.org/wiki/Vladimir_Putin (Wikipedia as accessed in 2014 with emphasis added.)

Although Dresdner Bank was absorbed as a subsidiary of the German Commerzbank, it appears that its “lucrative business relationship with Gazprom and the state oil company Rosneft,” continued. http://en.wikipedia.org/wiki/Dresdner_Bank In April of 2013, Commerzbank facilitated a $1 billion USD loan to GazpromNeft and 7 months later (Nov, 2013), Commerzbank coordinated another $2.15 billion loan, from 14 leading banks, for GazpromNeft. The deal was Gazprom Neft’s largest loan facility in recent years. GazpromNeft focuses on the exploration and sale of crude oil and gas; oil refining, and marketing of petroleum products. https://miningawareness.wordpress.com/2014/05/06/german-dresdner-bank-commerzbank-putin-and-russian-state-owned-gazprom-rosneft

The Alliance 90 part of the Greens has its roots in freeing Germany from communism-Soviet oppression and probably has a clear idea that it doesn’t want to be under Russian influence: “Alliance 90/The Greens, often simply Greens, (German: Bündnis 90/Die Grünen or Grüne) is a green political party in Germany, formed from the merger of the German Green Party (founded in West Germany in 1980) and Alliance 90 (founded during the Revolution of 1989–1990 in East Germany) in 1993“. https://en.wikipedia.org/wiki/Alliance_90/The_Greens

“Parliamentary questions
27 March 2017
P-002042-17
Question for written answer
to the Commission
Rule 130 Jeppe Kofod
(S&D)
Subject:  Rejection of Nord Stream 2 project on grounds of European security
Answer(s)
As the Commission knows, there have been plans for many years to expand the existing Nord Stream gas pipeline between Russia and Europe. The project has now progressed so far that those EU countries whose territories will be crossed by the pipeline can expect a formal written request within a very few days.

I would like to remind the Commission that the construction of Nord Stream 2 will make it possible for Russia to cut off Ukraine completely from vital gas supplies, will be a massive geopolitical advantage for Russia, will increase Europe’s dependency on Russian gas and will effectively keep Europe dependent both on fossil fuels and on energy supplies from countries with which we have strained diplomatic relations, as witnessed by Russia’s current trade boycott on items, including foodstuffs, produced in Europe. This is being tabled as a priority question in view of its urgent nature.
In light of the above:
What measures will the Commission take to prevent this project from being realised?
Does the Commission agree that the project has both energy and security implications which affect European cooperation as a whole and thus transcend the Member States’ purely national spheres?
Does the Commission believe that Nord Stream 2 is compatible with the Energy Union’s objective of increased energy independence?
Original language of question: DA”
Last updated: 28 March 2017 http://www.europarl.europa.eu/sides/getDoc.do?pubRef=-//EP//TEXT+WQ+P-2017-002042+0+DOC+XML+V0//EN

“Parliamentary questions
15 May 2017
P-002042/2017
Answer given by Mr Arias Cañete on behalf of the Commission
The Commission has stated publicly on several occasions that it considers the Nord Stream 2 project is not in line with the policy objectives of the Energy Union as it will not give access to a new supply source, it could allow a single supplier to further strengthen its position on the European Union gas market and it could lead to a concentration of supply routes.

In this context, the Commission will also continue supporting the transit of Russian gas through Ukraine.

Gas imports to the EU are expected to remain stable by 2030, due to declining domestic production and consumption. With the existing well-developed import infrastructures and the expected competitiveness of Liquefied Natural Gas (LNG) supplies after 2020, the Commission sees no need for new infrastructure of the magnitude of Nord Stream 2.

As guardian of the Treaty, the Commission will closely follow Member States procedures and is ready to support Member States in the correct application of EU rules, notably in the field of environment, public procurement, competition law, including state aid.

In addition, the Commission believes that Nord Stream 2, if built, should not operate in a legal void. This is why the Commission will seek a mandate from the Council to negotiate an agreement with Russia that will apply key principles of the European Union energy acquis to Nord Stream 2.”
http://www.europarl.europa.eu/sides/getAllAnswers.do?reference=P-2017-002042&language=EN

Nord Stream picture and description may be found here: https://en.wikipedia.org/wiki/Nord_Stream#/media/File:Nord_Stream_ceremony.jpeg
The one above with caption is via Boell. de