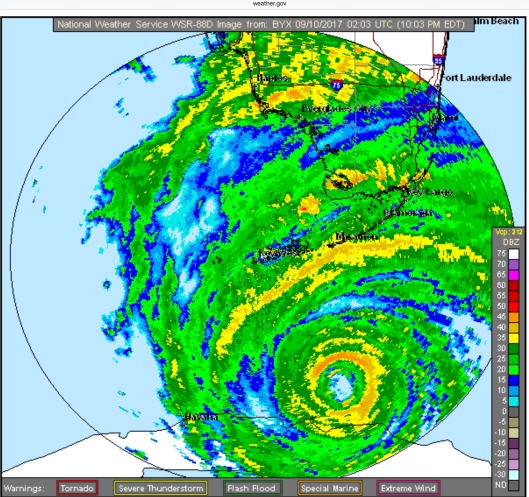 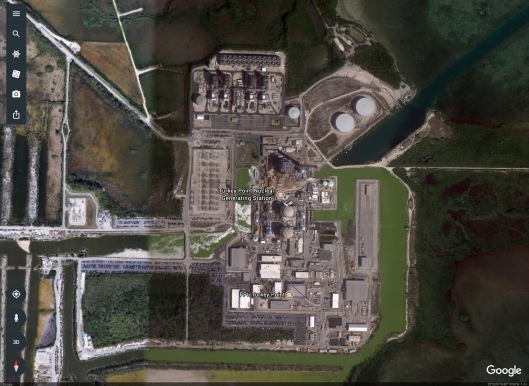 Turkey Point Nuclear (and non-nuclear) Generating Station on Biscayne Bay.
According to the Miami Herald, “FPL shuts down one nuclear reactor at Turkey Point” BY NANCY DAHLBERG, SEPTEMBER 09, 2017 1:49 PM. It is reported that FPL started shutting one of the two Turkey Pt nuclear reactors down on early Saturday morning. They plan to leave St. Lucie nuclear power station operating at full power. When was this decision made? The area was under a hurricane warning Friday night and remains so. While the height of predicted possible storm surge flooding has decreased, there is still the possibility of very heavy rainfall, as well as of some storm surge flooding in the area of the site. Late Friday night, Hurricane Irma was still at 160 mph sustained winds, though by this morning it was 130 mph. Currently it is at 120 mph (195 km/hr) sustained winds with higher gusts. There are risks of spin-off tornados too. According to the US NRC, it takes about 8 hours to complete a proper shutdown. With too little time, the nuclear power station could be in the midst of a shutdown when offsite power is lost, warned the US NRC in 1993. There are already some power outages in Florida. The NRC adds: “Additionally, at Turkey Point (and at other commercial reactors susceptible to hurricane damage), important equipment (e.g., auxiliary feedwater) is located outside and likely would not be accessible during a hurricane” [Note that the one Turkey Point nuclear reactor was only shutdown to the extent that nuclear reactors can shutdown without fuel removal. It was taken offline and power reduced. The second one apparently is going full power. ]

Below is the 5 am EDT key message summary and an 8 am update for Saturday morning. The warnings were already in place on Friday. Hurricane warnings remain in effect for Turkey Point. 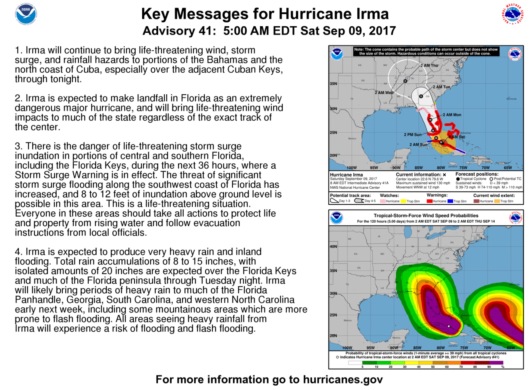 Excerpts from Advisory No. 44, at 11 pm EDT:
“ZCZC MIATCPAT1 ALL
TTAA00 KNHC DDHHMM CCA
BULLETIN
Hurricane Irma Advisory Number 44…Corrected
NWS National Hurricane Center Miami FL AL112017
1100 PM EDT Sat Sep 09 2017
Corrected to remove the Storm Surge Watch in the Watch/Warning
section
…IRMA TAKING ITS TIME MOVING AWAY FROM CUBA…
…LIFE-THREATENING STORM SURGE EXPECTED IN THE FLORIDA KEYS AND
THE WEST COAST OF FLORIDA…
SUMMARY OF 1100 PM EDT…0300 UTC…INFORMATION
———————————————–
LOCATION…23.5N 81.0W
ABOUT 30 MI…50 KM NNE OF VARADERO CUBA
ABOUT 90 MI…145 KM SE OF KEY WEST FLORIDA
MAXIMUM SUSTAINED WINDS…120 MPH…195 KM/H
PRESENT MOVEMENT…NW OR 305 DEGREES AT 6 MPH…9 KM/H
MINIMUM CENTRAL PRESSURE…933 MB…27.55 INCHES
[….]
RAINFALL: Irma is expected to produce the following rain
accumulations through Wednesday:
[….]
The Florida Keys…10 to 20 inches, isolated 25 inches.
[….]
In all areas this rainfall may cause life-threatening flash floods
and, in some areas, mudslides.
TORNADOES: A few tornadoes are possible through Sunday night,
mainly across southern, central, and eastern portions of the Florida
peninsula….“. Read the entire update here: http://www.nhc.noaa.gov/text/refresh/MIATCPAT1+shtml/100307.shtml
Below is rainfall predictions as of Saturday. However, the same amounts of possible rainfall for the area were shown on Friday, too. 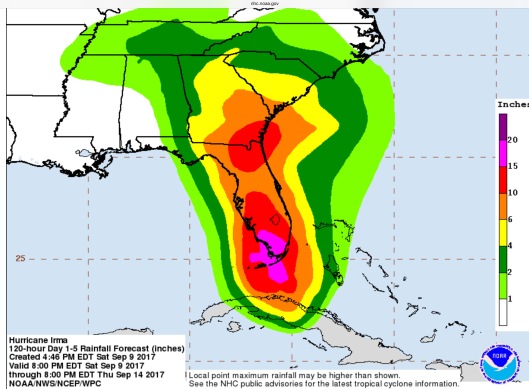 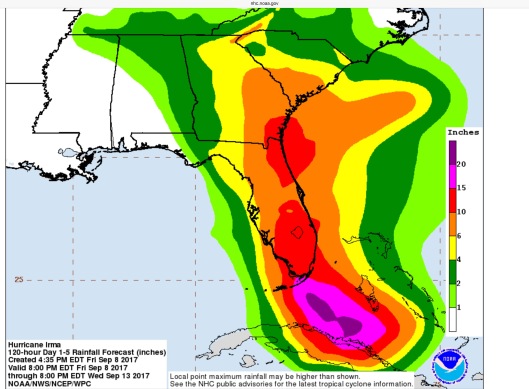 Below is from the US NRC, which takes most of its funding from the nuclear industry, and thus generally treats the nuclear utilities as the spoiled brats that they are. So, when they say there’s a problem it is very, very bad. This is probably why the NRC hadn’t updated its blog since March. Apparently uproar about Hurricane Harvey and the South Texas Nuclear Power Station not shutting down resulted in their first post in half a year, where the public was assured that two South Florida Nuclear Power Stations would be shutdown for Hurricane Irma. The following is an excerpt from a document about problems and lessons supposedly learned from Hurricane Andrew: “Adequacy of Timing of Plant Shutdown in Anticipation of a Hurricane: Turkey Point procedures for timing of a plant shutdown in anticipation of a hurricane require that the plant be in at least Mode 4 (i.e., hot shutdown) 2 hours before the onset of hurricane-force winds at the site. Estimating 8 hours to complete an orderly shutdown, the licensee began a plant shutdown approximately 12 hours before the predicted landfall of the hurricane. As a result, both units were in Mode 4 when Hurricane Andrew struck. However, the licensee commitments in response to the station blackout rule only require the licensee to commence shutdown at least 2 hours before the onset of hurricane-force winds. Therefore, starting a plant shutdown strictly in accordance with the licensee commitments could have resulted in the plant being in the midst of a dual-unit shutdown when offsite power was lost. Additionally, at Turkey Point (and at other commercial reactors susceptible to hurricane damage), important equipment (e.g., auxiliary feedwater) is located outside and likely would not be accessible during a hurricane.” https://www.nrc.gov/reading-rm/doc-collections/gen-comm/info-notices/1993/in93053.html

By a streak of luck, Hurricane Irma apparently isn’t going to impact Turkey Pt. Power Station as seriously as Hurricane Andrew did, though it could have been far worse: “At about 4:00 a.m. on Monday, August 24, 1992, Hurricane Andrew passed directly over the Turkey Point Electrical Generating Station with sustained wind speeds of 145 mph (233 km/h) and gusts of at least 175 mph(282 km/h).” https://www.osti.gov/scitech/servlets/purl/10158520

How long until luck runs out? Why is the public tolerating this nuclear power station sitting out in dangers way? And, St. Lucie Nuclear Power Station sitting even more dangerously on a sand bar? https://miningawareness.wordpress.com/2016/10/06/st-lucie-nuclear-power-station-built-on-a-barrier-island-post-hurricane-camille-nuclear-foolishness-matthew-warning/

Even if the reported deficiencies in floodproofing the site have been corrected, new ones may have occurred:”Flooding Walkdown Report FPL061-PR-001, Rev. 0 In Response to the 50.54(f) Information Request Regarding Near-Term Task Force Recommendation 2.3: Flooding for the Turkey Point Units 3 & 4” https://www.nrc.gov/docs/ML1234/ML12340A411.pdf