Is this the future that you want? Those with the right to freedom of speech, freedom of assembly, freedom of the press, cannot afford to be complacent. Included in this must be the freedom of religion and separation of church and state, as the story of Bruno makes clear.

In 2017, 500 years after Martin Luther tacked the 95 theses on the doors in Wittenberg in 1517, starting the Reformation, and 417 years after Bruno was burned at the stake, people appear to be forgetting the dangers of state churches, such as Putin’s Russian Orthodox Church.

Without these freedoms, eventually people may fear thought. And, ultimately this stifles creativity and innovation, making it bad for society, as well as for the individual. Giordano Bruno was burned at the stake by the Roman Catholic Inquisition in 1600.

Excerpted from Annie Besant, 1913, “The Story of Giordano Bruno“:
“For it is one of the evils of superstition that, in countries where it is powerful, it treats honest men as criminals and criminals as honest men, provided only that the criminals are devout, and obey the clergy, and frequent the Church. Until Christianity became softened and liberalised by Free-thought, it was safer in every country of Christendom to be a murderer or thief than to be a heretic. For the murderer and the thief could buy forgiveness and safety by gold and by prayer, whereas the heretic found the rack and the stake the penalty for pure life and honest speech….

Fearlessly, with head erect, he passed into the famous city, the city of Calvin and of Beza. Calvin indeed was dead—he had died in 1564, and it was now 1580— but Calvin’s spirit still dominated the city in which he had ruled supreme. At first Bruno found welcome from the Genevan Reformers, for they regarded him only as rebel to Rome, and dreamed not that the soaring spirit of this young man, now but thirty years of age, had broken not the fetters of Rome, but the fetters of Christianity, and that Calvin’s narrow theology could no more hold him captive than could the statelier creed of Rome. For a while, however, brief rest was his, until that warrior spirit of his, ever longing for battle with its peers, flung itself into hot controversy over the old quarrel with the philosophy of Aristotle. Just as Aristotle had become the pillar of orthodoxy in the Catholic church, so did Aristotle also rule unchallenged in Geneva. In fact, the Genevan citizens had actually passed a decree “for once and for ever, that neither in logic nor in any other branch of learning, shall any one among them go astray from the opinions of Aristotle ”.

Such iron mould of thought did in no wise suit Bruno’s enquiring and ever-progressing genius and he soon found that, as before in the monastery, evil looks were cast on him, and hard words were his lot. To his surprise at first, and then to his bitter indignation, he found that the Protestants of Geneva claimed the right to dissent from Rome, and the right to persecute those who dissented from themselves, and at last, being told that the rulers of the city had begun to recall the fate of Servetus, burned in that very city by Calvin, but some twenty-seven years before, Bruno deemed that he would do wisely to take to flight once more, lest the prison he had fled from in Italy should reappear to incarcerate him in Switzerland.

For the second time Giordano was a fugitive. For the second time as night spread her precious darkness over the earth, Giordano stood beside an open window, watching for chance of escape. A friend had given him shelter whose house was on one of the city walls ; and this night, when all was still, and the far-off tramp of the sentinel seemed only to mark the silence of the dusk, Giordano Bruno slipped down a rope from the window and safely reached the ground, and waving silent farewell to the faithful friend above, he turned his footsteps towards France, outcast and fugitive once more, and slowly made his way to Lyons.

Of the stay of Giordano Bruno in Lyons we know nothing. At that time Lyons was a centre of printing, and from the presses of Lyons poured out books which were spread over Europe, carrying light. Did Bruno long to see with his own eyes those printing presses which then seemed so wonderful? We cannot say.

But we know that his stay in Lyons was very brief, and that he passed on to Toulouse. But in Toulouse was no safe resting-place for Bruno. Toulouse boasted itself the bulwark of the faith against the reforming tide, and soon threats resounded from every side against the heretic visitor, who, coming from the city of Calvin, was worse heretic than Calvin himself. Thirty-six years later a fellow-countryman of Bruno, Vanini the Neapolitan, was burned for heresy in that same city of Toulouse, and Bruno was wise in quitting it and seek in rest in more liberal Paris….” “GIORDANO BRUNO, THEOSOPHY’S APOSTLE IN THE SIXTEENTH CENTURY A Lecture delivered in the Sorbonne at Paris, on June 15, 1911; THE STORY OF GIORDANO BRUNO” BY ANNIE BESANT, THE THEOSOPHIST OFFICE, ADYAR, MADRAS, INDIA 1913 Read the book here: https://archive.org/details/in.ernet.dli.2015.181287
https://en.wikipedia.org/wiki/Annie_Besant

“Abandoning contemplation for observation, he was the champion of natural science; he sought knowledge in nature, and preferring the inductive method, he was the herald of the great Bacon. His theories anticipate many modern discoveries, and in the pure ideality of his conceptions he surpasses Descartes and Leibnitz, Berkeley, Spinoza,and even Hegel, philosophers said to derive much from his teaching. With him, nothing is real but the ideal and, like the orator of Cicero, he maintains there is nothing of any kind so fair that there may not he a fairer conceived by the mind ; while with Plato he affirms the idea to be an individual object, an eternal exemplar present in the Divine mind, and received by man in participation, but not in essence.

Something in the history of Nola itself contributed to the energy of its sons. Italy was at the head of the Renaissance. The genius of Dante and Petrarch, the splendid discoveries of Columbus, Yespucius, and Cabot, the ambition of the Medici, descended upon no unworthy heirs, and the discoveries of Galileo in the heavens were at least on a par with those of the great travellers in the western hemisphere. But the dark thread in this glittering skein of wealth and adventure was the spirit of intolerance, which had descended upon the leaders of the people. The Inquisition, under the fostering care of Paul III., sprang into renewed existence three years before the death of Luther. It was, perhaps, merely an indication of the intolerance common to the whole of Europe….” Excerpted from “LIFE OF GIORDANO BRUNO, THE NOLAN“, BY I. FRITH REVISED BY PROFESSOR MORIZ CARRIERE. BOSTON: TICKROR & CO. 1887 as found here: https://archive.org/details/lifeofgiordanobr01frit

PART OF “THE STORY OF GIORDANO BRUNO” BY ANNIE BESANT: 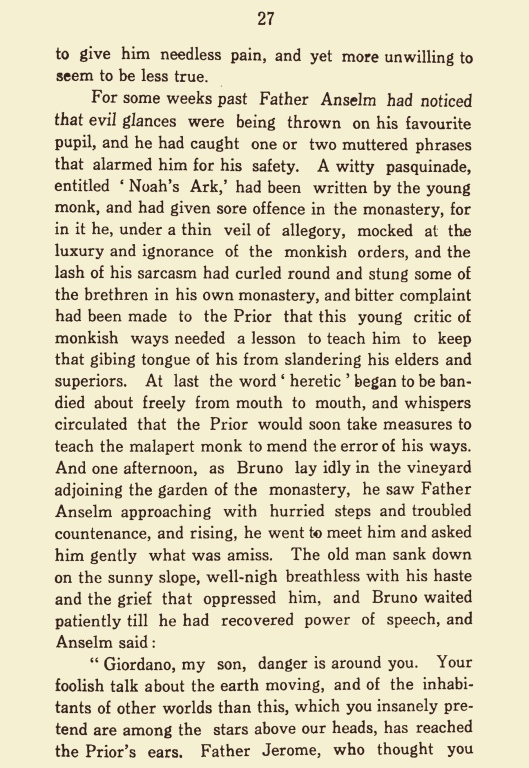 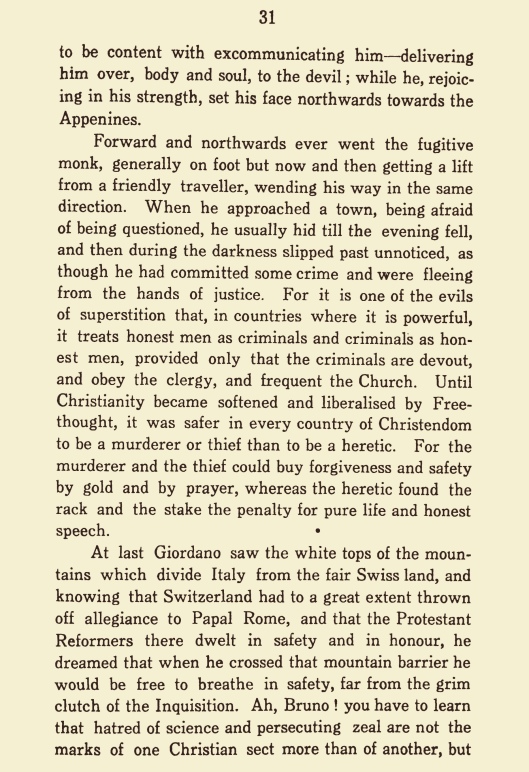 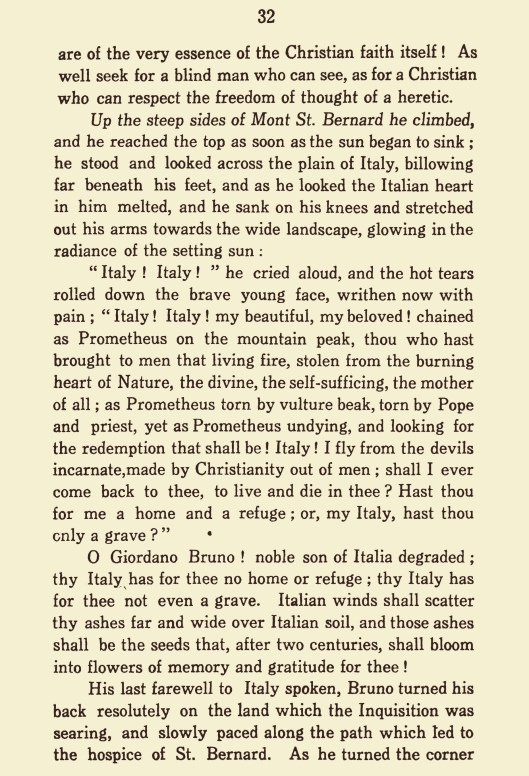 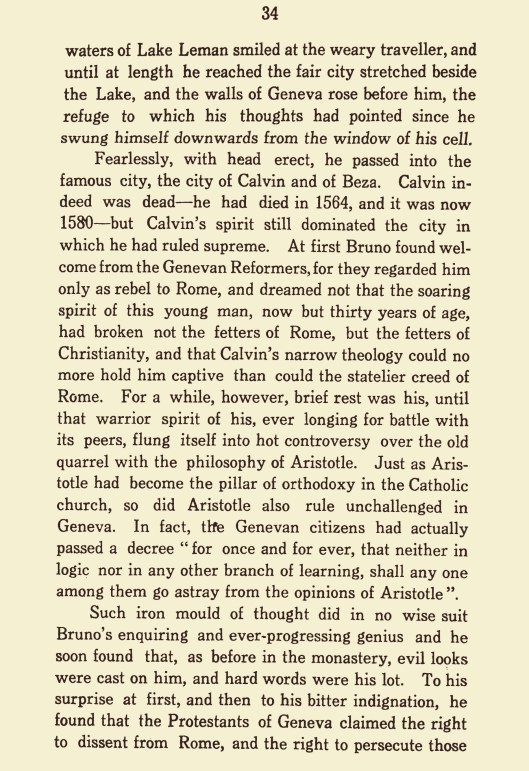 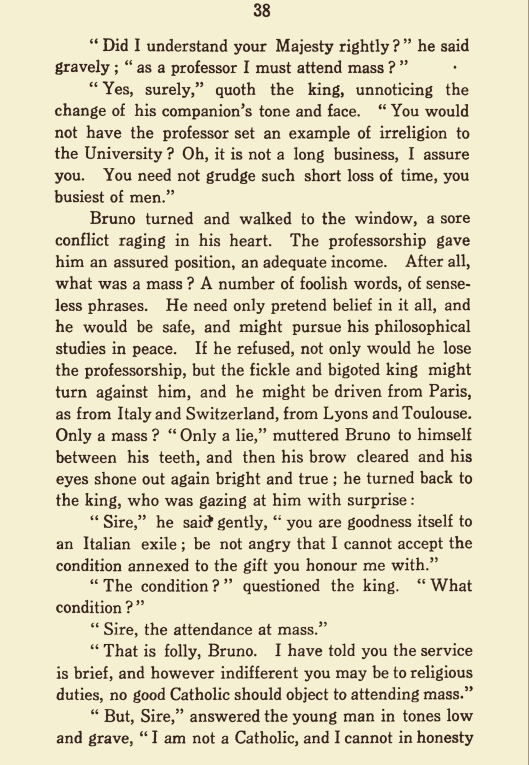 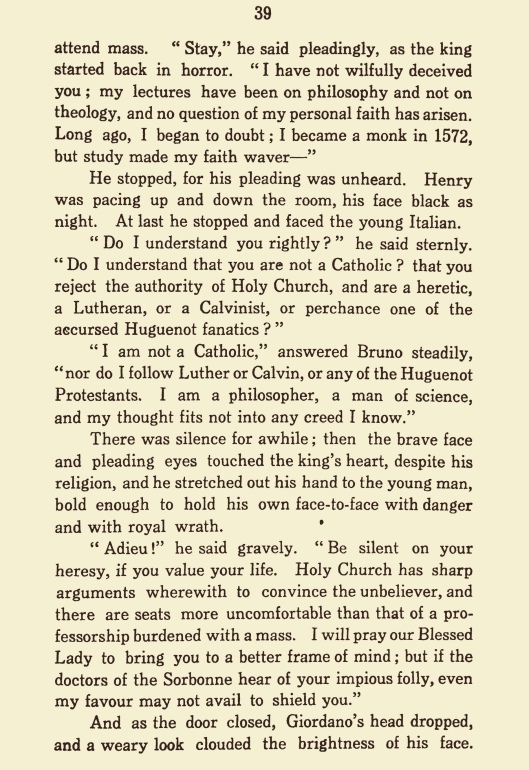 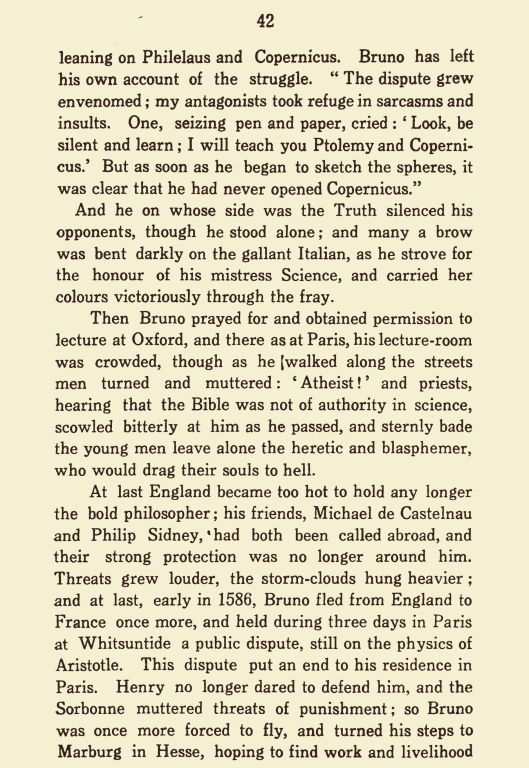