Russia calls the “New World Translation” of the Bible extremism. Is this the future that you want? Those with the right to freedom of speech, freedom of assembly, freedom of the press, cannot afford to be complacent. Included in this must be the freedom of religion and separation of church and state. In 2017, 500 years after Martin Luther tacked the 95 theses on the doors in Wittenberg in 1517, starting the Reformation, and 417 years after Bruno was burned at the stake by the Roman Catholic Inquisition in 1600, people appear to be forgetting the dangers of state churches, such as Putin’s Russian Orthodox Church. Without these freedoms, eventually people may fear thought. And, ultimately this stifles creativity and innovation, making it bad for society, as well as for the individual.

Will Putin eventually ban all Bible translations? Or simply rewrite it? Both the Old and New Testaments are extremist – extremist for both justice, especially social justice, and for love.

Putin’s favored Jewish sect (also the Trumps’), Chabad Lubavitch, has their own book, which isn’t used by other Jewish groups. So, will Putin’s Russian Orthodox Church make its own book and ban all Bible translations? One can but wonder what sorts of doctrinal bias appears, whether intentionally or unintentionally, in the non-banned Russian Orthodox translation(s).

Psalm 37 King James Version (KJV)
“Fret not thyself because of evildoers, neither be thou envious against the workers of iniquity. For they shall soon be cut down like the grass, and wither as the green herb. Trust in the Lord, and do good; …“

James 5  KJV: “Go to now, ye rich men, weep and howl for your miseries that shall come upon you. Your riches are corrupted, and your garments are motheaten. Your gold and silver is cankered; and the rust of them shall be a witness against you, and shall eat your flesh as it were fire. Ye have heaped treasure together for the last days. Behold, the hire of the labourers who have reaped down your fields, which is of you kept back by fraud, crieth: and the cries of them which have reaped are entered into the ears of the Lord of sabaoth.” 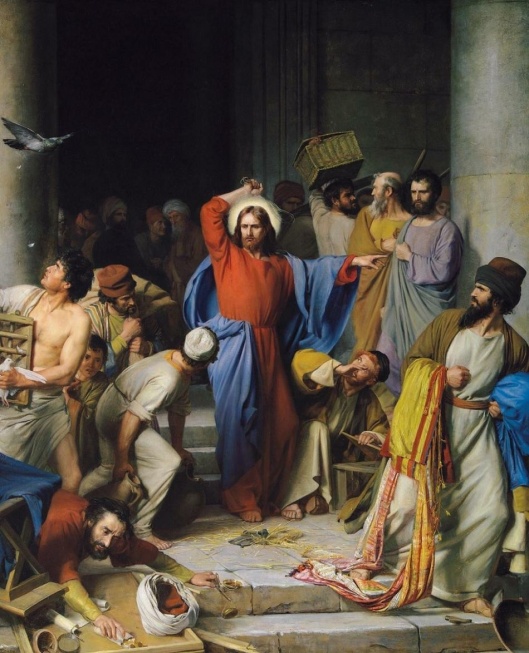 Dr. Jason BeDuhn ranked nine widely used Bibles in the English-speaking world, The King James Version (KJV), the New Revised Standard version (NRSV), the New International version (NIV), the New American Bible (NAB), the New American Standard Bible (NASB), the Amplified Bible, the Living Bible, Today’s English and the New World Translation NWT versions by examining several New Testament passages in which he considered “bias is most likely to interfere with translation.” and comparing them to the original Greek. These passages were Matthew 28:9, Philippians 2:6, Colossians 1:15-20, Titus 2:13, Hebrews 1:8, John 8:58, and John 1:1. While he remarked that the New World Translation was “not bias free“, he considers it a “remarkably good translation” and that “most of the differences are due to the greater accuracy of the NW as a literal, conservative translation“. However, he recommends that they stop using Jehovah for God in the New World Translation. Jason D. BeDuhn, “Truth in Translation: Accuracy and Bias in English Translations of the New Testament, 2004, pages 163, 165, 169, 175, 176. As cited in: https://en.wikipedia.org/wiki/New_World_Translation_of_the_Holy_Scriptures

While some accuse the New World translation of doctrinal bias, many, and perhaps all, translations have doctrinal bias. A translation is, by definition, problematic. This problem is exacerbated by various issues with the original texts (scribal errors, lost texts, etc). A short, easy, illuminating and hence important work addressing this problem of translation and doctrine is “What Paul Really Said About Women: The Apostle’s Liberating Views on Equality in Marriage, Leadership, and Love“, by John T. Bristow. A book sample may be read here: https://www.harpercollins.com/9780060610630/what-paul-really-said-about-women

Persecuting Jehovah’s Witnesses appear to be a sort of fascist litmus test: https://miningawareness.wordpress.com/2017/04/27/russian-federation-follows-nazi-soviet-pattern-persecutes-jehovahs-witnesses-in-apparent-violation-of-russian-constitution-jehovahs-witnesses-were-first-christian-denomination-banned-by-nazis

From RFERL: https://www.rferl.org/a/russia-jehovahs-witnesses-bible-translation-banned/28684384.html
“Russia Bans Jehovah’s Witnesses’ Translation Of Bible August 18, 2017 15:41 GMT, by Tom Balmforth  MOSCOW — A Russian court has banned the Jehovah’s Witnesses’ translation of the Bible following a drawn-out legal battle, another blow to followers of the pacifist Christian sect who have been branded “extremists” and driven to practicing their faith underground, as in Soviet times.

The Jehovah’s Witnesses’ parent organization in Russia and 395 regional branches were formally placed on the Justice Ministry’s list of “extremist” groups on August 17, a procedural move following the Supreme Court’s decision to ban the group’s activities and seize its property earlier this year.

In a separate case on August 17, a court in the northwestern border town of Vyborg banned the New World Translation Of The Holy Scriptures, the group’s version of the Bible. Several other publications by the Jehovah’s Witnesses — including a brochure, The Bible — What Is Its Message? — were also labeled extremist.

The case against the religious group’s Bible dates to July 2015, when a shipment of the books from Finland was stopped at the border and impounded by customs officials on suspicion of extremism.

The ban on the Bible used by the Jehovah’s Witnesses has not come into legal force, as the group intends to challenge the ruling in a regional court.

“Soon it will be illegal not only to gather [to worship], but also to read,” said Yaroslav Sivulsky, a member of the European Association of Jehovah’s Christian Witnesses, adding that the court proceedings felt like “theater.”

“Whatever our lawyers said, it was as if the ruling was already known,” he said.

The Jehovah’s Witnesses international headquarters in New York decried the ruling. “Just how far will Russia’s resistance to religious freedom go? We certainly hope that respect for sacred texts will prevail when we pursue this case on appeal,” said spokesman David Semonian in comments circulated by the group’s press service.

The statement said the court ruling contradicts legislation signed by President Vladimir Putin in 2015 stipulating that sacred texts such as the Bible and Koran cannot be labeled extremist.

The statement said the court relied on the findings of an expert panel that determined the book is not a Bible.

The Moscow-based Sova Center, which monitors the misuse of extremism legislation, criticized the “invalidity, helplessness, and glaring absurdity” of the panel’s findings.

“It’s just a typical translation,” Aleksandr Verkhovsky, Sova’s director, told RFE/RL. “It differs a little, of course, in language. There is always a variation between translations. It is not fundamentally different [from other versions of the Bible].”

He added: “It’s written in more modern language, and there is a certain difference [in the translation] which reflects their religious beliefs. Some things are written, for instance, with a small letter, not with a big letter. Or where different names for God are used, [the Jehovah’s Witnesses] write Jehovah everywhere. That’s the level [of variation that] we’re talking about.”

The Jehovah’s Witnesses, known universally for their door-to-door proselytizing, are viewed with suspicion in Russia for their rejection of military service and voting. Their refusal to take blood transfusions has seen them accused of being a threat to themselves, their children, and public safety.

The group was driven underground this year after the Supreme Court labeled them extremists, Sivulsky said. “When the ruling came into full force after July 17, then of course everyone without exception stopped gathering in big groups because it is a criminal offense. No one is consciously trying to be accused of criminal activity,” he said.

The Supreme Court ruling stipulates that all property belonging to the Jehovah’s Witnesses’ organization should be seized by the state, although Sivulsky said this provision had not yet been implemented. “We haven’t seen any action on this. [But] it’s a question of time.”

The banning of the group fits into a broader conservativism advocated by Moscow in a rejection of liberal Western values. It has also been seen as a victory for conservative factions of the Russian Orthodox Church, which view the Jehovah’s Witnesses’ rejection of elements of mainstream Christian doctrine as a threat.

However, Vsevolod Chaplin, the ultraconservative former church spokesman, disapproved of the banning of the group in comments to the NTV channel on August 17.

“Perhaps it would be better to keep them in the field of play to keep an eye on how they are developing so as to perhaps restrict it in its extreme activities,” he said.” Copyright (c) 2017. RFE/RL, Inc. Reprinted with the permission of Radio Free Europe/Radio Liberty, 1201 Connecticut Ave NW, Ste 400, Washington DC 20036 https://www.rferl.org/a/russia-jehovahs-witnesses-bible-translation-banned/28684384.html  Emphasis our own.