Ryan Zinke-Trump administration are so disrespectful that they didn’t bother to answer a letter written by the Bears Ears Inter-Tribal coalition for over 100 days! Below is a second letter sent. 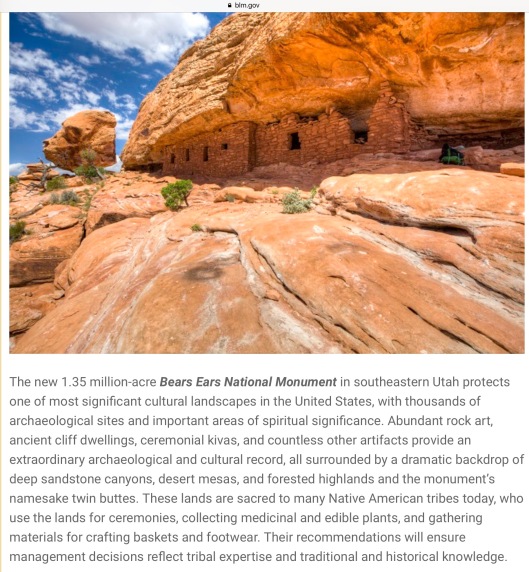 The comment deadline, “Review of Certain National Monuments Established Since 1996; Notice of Opportunity for Public Comment is July 11th except Bears Ears where the comment deadline was May 26th, two weeks after posting May 11th: https://www.regulations.gov/document?D=DOI-2017-0002-0001

The Bears Ears Inter-Tribal Coalition, a partnership of the Hopi, Navajo, Ute Indian Tribe, Ute Mountain Ute, and Zuni Tribal governments, is deeply troubled by the Executive Order directing the Department of Interior to review and propose changes to national monuments, and by your statements that Bears Ears will undergo such a review within 45 days. The designation of the Bears Ears National Monument was a long overdue moment in the protection of our cultural and spiritual heritage. Our Tribal governments have made it clear that any change to the monument would undermine the efforts of so many, and would disrespect our deep and enduring connections to this place.

During your confirmation hearing, you said “tribal sovereignty should mean something,” and “our nation should better equip our Indian Tribes with the ability for self-determination.” The establishment of the Bears Ears Commission, consisting of elected delegates from each of the five tribes, is a step in that direction. The Bears Ears National Monument proclamation is very clear that the Secretary must work with the Bears Ears Commission. We urge you to honor your statements, the proclamation, and our sovereignty as Tribal nations and leave Bears Ears National Monument as it is. The national monument has taken more than 80 years to designate, and finally acknowledges a cultural landscape rich in antiquities, with hundreds of thousands of archaeological and cultural sites sacred to dozens of tribes. The land is powerful medicine for healing – of the land, of plants and animals and for all people.

Our letters to your office from each of our Tribal nations, the Bears Ears Inter-Tribal Coalition, and the Bears Ears Commission requesting meetings with you have gone unanswered. It seems illogical that letters sent nearly 100 days ago have not been answered, yet there will be review of Bears Ears within the next 45 days. The fact that you have not met with us is evident in your statement yesterday to the press. You said: “The administration has heard from Congress… The designation of monuments may have cost jobs, wages, and public access… It is the opinion of the West that it is abused.”

Please do not forget – our Tribes are the original inhabitants of the West long before the United States was a nation, and we do not view Bears Ears National Monument as an abuse. To the contrary, it is a fulfillment of both our duty to preserve our cultures and our ancestral lands, and its designation was the result of a long, deliberative process with your predecessor to further our self-determination. To that end, we reiterate our requests for you to meet with each of the Tribes, and the Bears Ears Tribal Commission.

Bears Ears National Monument is more than just mere federal land to us, as it may be to many other stakeholders – it is a living landscape; it has a pulse. “Bears Ears” translates literally from all of our Native languages – Diné, Hopi, Ute, and Zuni. We have known this place since time immemorial. Bears Ears is a place where certain herbs, medicines, and ceremonial materials exist that are not found anywhere else on Earth.

For the Navajo, the monument is rich with places of great power tied to mythological cosmology, as well as the birthplace of important leaders from modern history. For the Ute, much of the monument was actually proposed as our reservation in the early 20th century, and in the monument is a location where a prophecy foretells that all the nations of the world will come together to heal. For the Hopi, Zuni, and other Pueblos, the monument is a place that bears ample evidence of migrations over centuries that lead the to the center places where we now reside.

Our ancestors are buried here, and we all practice pilgrimage to sacred locations throughout the monument. It means different things to each of our Tribes, but we all share in a desire to see it remain protected as a national monument. So great is its power that we have agreed, for the first time in history, to set aside our differences to work together to see it protected and defended. The significance and importance of our unity cannot be overstated.

The Bears Ears National Monument is the first national monument to be protected at the behest of sovereign Tribal Nations. Its proclamation recognizes Native American Traditional Knowledge as both a value to be protected by the monument and a resource to be used in its management. The proclamation also established a Tribal commission to work with the U.S. Government to help plan for and manage the lands. The Bears Ears Commission has been formalized and has already began meeting with federal land managers. In addition to sitting down with our Tribal Councils, we invite you to join the next Bears Ears Commission meeting on May 19th, 2017. This will give you the opportunity to witness for yourself the substantial progress we have made in building relationships with your staff on-the-ground, and to learn of the inspiring plans we jointly have for what will surely be America’s best national monument – one which invites and involves all who wish to share in our knowledge systems and our cultures in a landscape unmatched in beauty.

Bears Ears map. Note that Obama compromised and left a lot of the proposed monument unprotected, proving that if you give the greedy an inch then they try to take a mile. The original proposal is to the far right.