From Congresswoman Maxine Waters:
“Waters: On Sanctions Waivers, Trump’s Word Not Enough
Washington, DC, April 22, 2017
In response to a Trump Administration statement denying that they will issue waivers to the sanctions on Russia to authorize oil drilling, Congresswoman Maxine Waters (D-CA), Ranking Member of the Committee on Financial Services, made the following statement:

“For months, I have sounded the alarm about Trump, his associates, their many suspicious ties to Russia and oil and gas companies, and their long game of getting sanctions on Russia lifted to line the pockets of their cronies.

“The denial of this waiver doesn’t mean that this game is over. Far from it. If there is one thing I’ve learned about Donald Trump, it’s that his word is no good, and that he is not to be trusted. You can be certain that I will continue to be watching him and his associates – who I call the “Kremlin Klan” – very closely, and taking action to make sure they cannot harm our national interest.

“Given that under Rex Tillerson’s leadership Exxon lobbied against the sanctions, given reports that Michael Flynn discussed Russia sanctions with the Russian Ambassador before Trump took office, and given that the FBI reportedly obtained a FISA warrant to monitor Trump campaign advisor Carter Page, who also invested in Russian oil, there are many, many reasons for Congress to be vigilant about ensuring these sanctions stand strong.”

Secretary of State Rex Tillerson, in his time as the head of ExxonMobil, negotiated a multibillion-dollar deal with Russia to drill in the Arctic, a deal that would reap ExxonMobil billions in profits if the sanctions are lifted.

Also during his tenure as CEO of ExxonMobil, Tillerson received Russia’s Order of Friendship from Vladimir Putin, and the company advocated against the Russia sanctions.   In February, President Trump signed a bill into law [1]to once again allow oil, mining and gas companies like ExxonMobil to do business with corrupt governments without disclosing their transactions.

Also in February, Ranking Member Waters and Subcommittee Ranking Members sent a letter to the Committee Chairman [2] requesting that the Committee begin an immediate investigation to understand the nature of the communications between former U.S. National Security Advisor Michael T. Flynn and Russian Ambassador Sergey Kislyak. The lawmakers urged their Republican colleagues to investigate Flynn’s ties to Russia, including any commitments made regarding the Trump Administration’s sanctions policy towards the Kremlin and whether the President or other officials authorized Flynn’s communications with the Russian government.  In March, Ranking Member Waters and Committee Democrats called on the Committee to use the full range of its investigative powers [3] to examine Deutsche Bank’s Russian money-laundering operation, and assess the integrity of the U.S. Department of Justice’s ongoing investigation into the scheme, given the Trump Administration’s conflicts of interest in the matter and the revelations of Attorney General Sessions’ communications with the Russian Ambassador.  To date, Chairman Hensarling has failed to respond to both letters.
[1] http://democrats.financialservices.house.gov/news/documentsingle.aspx?DocumentID=400241
[2] http://democrats.financialservices.house.gov/news/documentsingle.aspx?DocumentID=400248
[3] http://democrats.financialservices.house.gov/news/documentsingle.aspx?DocumentID=400285 http://democrats.financialservices.house.gov/news/documentsingle.aspx?DocumentID=400396 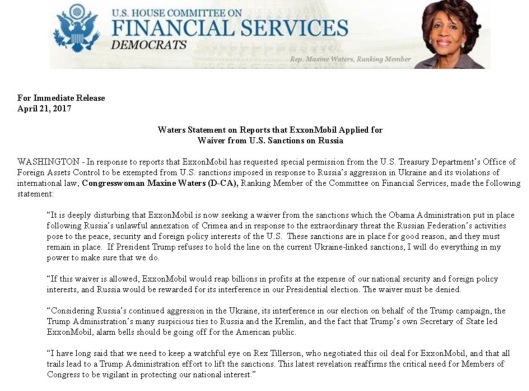