Today U.S. Senator Chris Van Hollen wrote to the CEO of Deutsche Bank USA to raise concerns about conflicts of interest between the bank and President Trump.

He is asking for information on a series of issues, from efforts to restructure President Trump’s debt, to possible preferential treatment for family members who are now federal employees, to any meetings between Deutsche Bank and the Trump Administration. Senator Van Hollen is also seeking assurances that the Bank is not using ties to President Trump as leverage in any ongoing cases or regulatory oversight.

This comes on the heels of a letter from Senator Van Hollen to Attorney General Sessions asking him to recuse himself from any investigations into President Trump and Deutsche Bank if he cannot be impartial.

The full text of the letter is below.
Dear Mr. Woodley,

I write to you with great concern regarding conflicts of interest between Deutsche Bank and the President of the United States and how these conflicts may impact ongoing investigations and regulatory oversight of your institution.

Last month, I wrote to Attorney General Jeff Sessions asking him to commit to a fully impartial investigation or appoint an independent counsel – he has failed to respond to my inquires.  Now, I am asking that you do not use your institution’s ties to President Trump as leverage in any of these ongoing cases or ongoing regulatory oversight.  Further, I ask that Deutsche Bank and its executives do not take any actions to assist Mr. Trump in circumventing any of his ethical obligations to avoid conflicts of interest.

One legal expert called the relationship between the President and Deutsche Bank “the biggest conflict that we know about in terms of dollar amounts and the scale of legal exposures.”   That same expert also said that it “may be impossible” to avoid the appearance of impropriety related to these obligations.  Prior financial disclosures have listed two loans and two mortgages for which Deutsche Bank was the lender and the President was the borrower.   These loans reportedly amount to roughly $340 million, with another $950 million extended to a venture in which the President owns a 30 percent stake.

Those issues are separate from the conflicts of interest with the President’s family, many of whom are now federal employees.  For example, the President’s son-in-law, Jared Kushner, holds a multi-million dollar line of credit at Deutsche Bank and $370 million in financing on the Kushner Companies’ Time Square retail condo property.

Mr. Kushner now serves as Senior Advisor to President Trump, with a portfolio that ranges from tax and banking policy to military and international affairs.

As you know, your institution is being investigated by multiple law enforcement entities and regulators around the world.  In the United States, the U.S. Department of Justice’s office in the Southern District of New York had been engaged in settlement negotiations tied to Deutsche Bank’s role in the mortgage crisis and in ongoing investigations of the bank on other matters.  At the same time, the Federal Reserve Bank of New York is also engaged in an investigation into currency manipulation.

1. Written assurances that your institution will not use your relationship with the President to circumvent ongoing investigations by law enforcement and regulators.

2. An explanation about your efforts to restructure President Trump’s debt with your institution, including whether or not it has been sold to foreign entities.

3. Assurances that you have not given the President or his family preferential treatment in that debt restructuring that would violate federal ethics laws.

4. Detailed accounts of meetings between Deutsche Bank and the Administration.

5. Information about the Politically Exposed Person’s review undertaken by Deutsche Bank as it relates to President Trump.   Please describe the risk management your bank is now undertaking with the accounts you identified in this review.  Please identify any irregularities that came up in the review and how your institution’s plan for managing these irregularities.
Please ensure that Deutsche Bank responds by May 12, 2017. Thank you for your attention to this issue.
Sincerely,
Chris Van Hollen
United States Senator”
https://www.vanhollen.senate.gov/content/van-hollen-writes-deutsche-bank-conflicts-interest-trump-administration 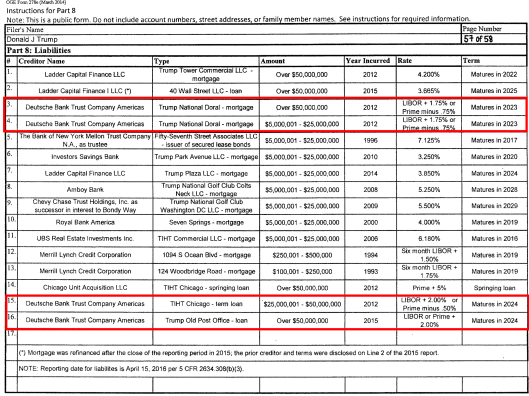