When rats are cornered they jump?

US President Trump and Israeli PM Netanyahu appear to have the same talking points on Syria. They are both facing corruption investigations; they are both backed by Sheldon and Miriam Adelson, who gave at least $20 million to benefit Trump’s campaign. And, Netanyahu and Trump’s son-in-law/in-laws are long-time aquaintances or friends. A corruption investigation into Israeli PM Netanyahu may take two months, it was learned on Monday. According to the Times of Israel (Jan. 2017), Sheldon Adelson may be called to testify. Is Trump really going against Putin’s interests in Syria? Not necessarily. These missile strikes are in the interest of some Russian oligarchs.

On Tuesday, on Twitter, Benjamin Netanyahu‏ ‪stated: “When I saw pictures of babies suffocating from a chemical attack in Syria, I was shocked and outraged” https://twitter.com/netanyahu/status/849253480036433921?ref_src=twsrc%5Egoogle%7Ctwcamp%5Eserp%7Ctwgr%5Etweet

The next day, on Wednesday, Trump stated: “When you kill innocent children, innocent babies, little babies, with a chemical gas that is so lethal that people were shocked to hear what gas it was, that crosses many, many lines, beyond a red line, many many lines.” http://www.npr.org/2017/04/05/522743184/president-trump-syrian-attack-crossed-a-lot-of-lines-for-me

After the missile strikes on Thursday, Trump stated: “Assad choked out the lives of innocent men, women and children. It was a slow and brutal death for so many. Even beautiful babies were cruelly murdered in this very barbaric attack… Tonight I ordered a targeted military strike on the airfield in Syriafrom where the chemical attack was launched“. (Trump on Thursday evening EDT).

As at least one member of Congress has observed, this was an act of war and required Congressional approval in advance. Even though this apparently has been ignored by other presidents, it doesn’t make it any more right. Notice that Trump waited until the US House had gone home for Easter break to launch the attack! 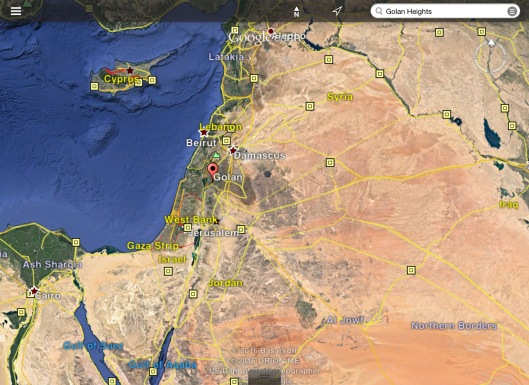 [Trump and Netanyahu pretending to care about the babies, scares up the memory this: “The Nayirah testimony was a false testimony given before the Congressional Human Rights Caucus on October 10, 1990 by a 15-year-old girl who provided only her first name, Nayirah. The testimony was widely publicized, and was cited numerous times by United States senators and President George H.W. Bush in their rationale to back Kuwait in the Gulf War…. In her emotional testimony, Nayirah stated that after the Iraqi invasion of Kuwait she had witnessed Iraqi soldiers take babies out of incubators in a Kuwaiti hospital, take the incubators, and leave the babies to die.” https://en.wikipedia.org/wiki/Nayirah_(testimony) ]

Due to a long tradition of pograms and other anti-semitic behavior by Russia and the old Russian Empire – for which no one calls them out – many Russians fled to Israel (and western Europe, and the Americas) when given the chance. Since 1970, only one Jewish grandparent has been required for immigration, and it has been suggested that documents may have been forged to enable Russian mafia to hide out in Israel and avoid extradition. Putin himself may have an Israeli passport, whether or not he has a Jewish ancestor: https://miningawareness.wordpress.com/2017/03/31/making-sense-of-trump-ties-to-alleged-neo-nazis-hungary-putin-axis-russian-mobsters-and-israeli-settlements Furthermore, war or a negotiated peace in Syria might benefit Putin’s re-election bid. Bannon must have been opposed to the intervention and that’s why they booted him off of the security committee. Bannon has been tied to the Mercers: uber-wealthy campaign donors. However, the Adelsons gave the most. It’s hard to top $20 million. And the Adelsons and Trump son-in-law Jared Kushner share an interest in Israeli settlements and friendship with Netanyahu. Kushner’s grandmother was a famous resistance fighter and Holocaust survivor. Most, and perhaps all, of Trump’s Russian ties are also Jewish. Being Jewish and being Russian are not mutually exclusive categories, as some seem to think. Nonetheless, Russia apparently stopped renewing many dual national passports ca June of last year, according to Forward .com: “Russia Quietly Strips Emigres of Dual Citizenship“, by Julie Masis June 12, 2016: http://forward. com/news/world/342136/russia-quietly-strips-emigres-of-dual-citizenship/

The two biggest reasons that Trump won is that people want jobs and most Americans have finally had enough of overseas wars. In short, that’s what “America First” meant to the American voter. The night before the election, Trump promised jobs and Hillary didn’t. If Trump’s appointees and policies thus far haven’t made working Americans understand that he’s not for them, this might, though probably only if intervention continues.

As punishment to Senator McCain for actually doing something good – moving against a tax loophole – the Mercers poured a large amount of money into a McCain opponent. Sheldon Adelson helped him out by giving even more to McCain than the Mercers gave against McCain. McCain’s response to the Strikes against Syria is found below.

When rats are cornered, they jump – supposedly something Putin learned as a child. Trump and Netanyahu are apparently cornered and are dangerous. Putin may or may not be cornered and dangerous as well. If this ends badly guilt falls at the feet of the FBI and other intelligence agencies for not doing their job or not promptly, and at the feet of US Congress for not moving promptly into impeachment proceedings, which are an investigation.

Article from the Jerusalem Post, “Report: Investigation of Netanyahu to continue for at least two months” http://www.jpost. com/Israel-News/Benjamin-Netanyahu/Report-Investigation-of-Netanyahu-to-continue-for-at-least-two-months-485989

“Rep. Barbara Lee‏ ‪@RepBarbaraLee‬ This is an act of war. Congress needs to come back into session & hold a debate. Anything less is an abdication of our responsibility“.

This is an act of war. Congress needs to come back into session & hold a debate. Anything less is an abdication of our responsibility. https://t.co/GvHML3ByeI

From the New York Times, 11 Feb. 2017: “For Kushner, Israel Policy May Be Shaped by the Personal“: “… he knew the prime minister, who was friendly with his father, a real estate developer and donor to Israeli causes. Mr. Netanyahu had even stayed at the Kushners’ home in New Jersey, sleeping in Jared’s bedroom. (The teenager moved to the basement that night.) On Wednesday, when the Israeli prime minister visits the White House, Mr. Netanyahu and Mr. Kushner will reunite on far different terms from before — and yet their meeting will be imbued with some of the shared ideas of those old encounters. Mr. Netanyahu.” https://www.nytimes.com/2017/02/11/us/politics/jared-kushner-israel.html

The Adelsons gave $20 million against Hillary (Future 45) once Trump was the nominee. They gave Senator John McCain over $1 million via Arizona Grassroots Action
https://www.opensecrets.org/outsidespending/donor_detail.php?cycle=2016&id=U0000000310&type=I&super=N&name=Adelson%2C+Sheldon+G.+%26+Miriam+O.
https://www.opensecrets.org/outsidespending/detail.php?cmte=C00558445&cycle=2016

According to the Times of Israel: “Adelson expected to testify in Netanyahu probe — report Police to ask Israel Hayom’s billionaire owner if he knew of PM’s alleged quid pro quo deal with publisher of competing daily BY RAOUL WOOTLIFF January 16, 2017, 11:22 pm”
http://www.timesofisrael. com/adelson-expected-to-testify-in-netanyahu-probe-report/

As reported in February by the Times of Israel: “Naftali Bennett: ‘Palestinian flag was today lowered, and replaced with Israeli flag’ Right-wing lawmakers rejoice after Netanyahu-Trump summit
MKs celebrate a new US approach while left-wing parliamentarians mourn the demise of the two-state solution BY TIMES OF ISRAEL STAFF February 15, 2017, 10:22 pm
http://www.timesofisrael. com/right-wing-lawmakers-rejoice-after-netanyahu-trump-summit/

Article from the Jerusalem Post Report: “Investigation of Netanyahu to continue for at least two months” http://www.jpost. com/Israel-News/Benjamin-Netanyahu/Report-Investigation-of-Netanyahu-to-continue-for-at-least-two-months-485989

“We salute the skill and professionalism of the U.S. Armed Forces who carried out tonight’s strikes in Syria. Acting on the orders of their commander-in-chief, they have sent an important message the United States will no longer stand idly by as Assad, aided and abetted by Putin’s Russia, slaughters innocent Syrians with chemical weapons and barrel bombs.

“Unlike the previous administration, President Trump confronted a pivotal moment in Syria and took action. For that, he deserves the support of the American people. Building on tonight’s credible first step, we must finally learn the lessons of history and ensure that tactical success leads to strategic progress. That means following through with a new, comprehensive strategy in coordination with our allies and partners to end the conflict in Syria. The first measure in such a strategy must be to take Assad’s air force—which is responsible not just for the latest chemical weapons attack, but countless atrocities against the Syrian people—completely out of the fight. We must also bolster support for the vetted Syrian opposition and establish safe zones to address the ongoing humanitarian crisis. As we do, we can and must continue the campaign to achieve ISIS’s lasting defeat.” https://www.mccain.senate. gov/public/index.cfm/2017/4/statement-by-mccain-graham-on-military-strikes-in-syria

For all of the bad McCain has done, he occasionally has done good things, including speaking up against changing Senate filibuster rules and speaking up against Russia. For instance, he took action against a basket option tax loophole, so that Breitbart funder Mercers took vengeance and put a lot of money against him when he last ran for office. Note that Trump lender Deutsch Bank was involved too: “The report outlines how Deutsche Bank AG and Barclays Bank PLC, over the course of more than a decade, sold financial products known as basket options to more than a dozen hedge funds. From 1998 to 2013, the banks sold 199 basket options to hedge funds which used them to conduct more than $100 billion in trades. The subcommittee focused on options involving two of the largest basket option users, Renaissance Technology Corp. LLC (“RenTec”) and George Weiss Associates.” https://www.hsgac.senate.gov/subcommittees/investigations/media/subcommittee-finds-basket-options-misused-to-dodge-billions-in-taxes-and-bypass-federal-leverage-limits However, Sheldon Adelson, an even larger Trump donor, put even more money in support of McCain to counter the Mercers.

Tonight's airstrikes will not displace Assad, but may deter chem weapon use. Actions in Syria still not authorized by Congress. Need a vote: pic.twitter.com/UiSNCb8p6Q