Clearly these thugs, half in riot gear with helmets, are not trained in policing but rather seem think it’s a football game and tackled independent media who did not have helmets. If it takes so many police to take down one unarmed individual – and in the process they injured the person (Eric Poemz) and possibly broke Eric’s hip, even though there was thick mud – then they are not properly trained as law enforcement officials

The unknown speaker in the Eric Poemz video, apparently an American Indian, asks a policeman to put down his badge, says something like I see you’ve got a heart and soul and look like a very prayerful man… be honorable and set down your badge right now in front of 6,100 people (watching livestream) and then the police charged. Eric Poemz video: http://youtu.be/eFWeJ7iWEUs 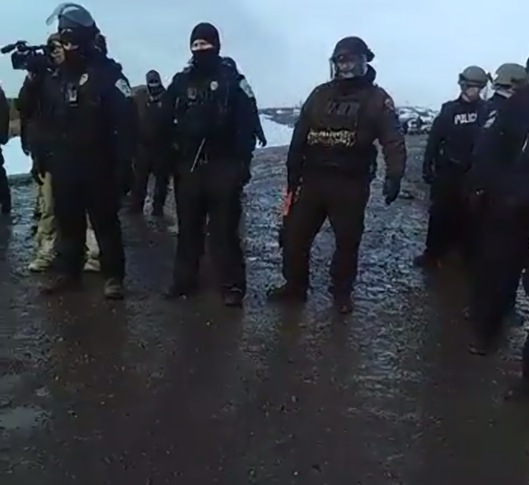 Some police waddle-charged water protectors with great effort as they appear overfed – one with their pants even falling down in the back, prison uniform style – a pitiful lot – apparently chosen for brute force weight. This video shows the police from behind: http://youtu.be/6WrG5UBAuHo The speaker on the Eric Poemz video had also pointed out that the police didn’t have their name tags on and that this is illegal and shows that they are up to no good.

Wisconsin, i.e. Governor Scott Walker, sent police backup to remove the remnant water protectors and independent journalists! Does it have to do with the money that Trump donated to him? Trump and Scott Walker’s shared donor of Sheldon Adelson? https://miningawareness.wordpress.com/2017/02/23/because-scott-walker-asked-leaked-docs-suggest-wisconsin-governor-illegally-raised-corporate-donations/. Or, larger Scott Walker donor Paul Singer who just visited with Trump? https://assets.documentcloud.org/documents/3105985/2012-08-14-Exhibits-01-100-PT2.pdf Harald Simmons discussed here: https://miningawareness.wordpress.com/2017/02/23/because-scott-walker-asked-leaked-docs-suggest-wisconsin-governor-illegally-raised-corporate-donations/ is the deceased owner of nuclear waste dump WCS, which Trump fundraiser and donor Doug Kimmelman (EnergySolutions) is trying to buy, in violation of antitrust law.

Clearly these thugs, half in riot gear with helmets, are not trained in policing but rather think it’s a football game and tackled independent media who did not have helmets. If it takes so many police to take down one unarmed individual – and in the process they injured the person (Eric Poemz) and possibly broke Eric’s hip, even though there was thick mud – then they are not trained as law enforcement police. It’s really sick. If it were asphalt would he even be alive? Perhaps the police were high school football players hit over the head one too many times. Eric begged for an ambulance and they appear to have dragged or carried him and thrown him into a police car (we don’t know for certain.). He said that there wasn’t room for him, and one policeman said there was room. Meanwhile, a police thug with a Fargo ND uniform said something like “This game is over”, the governor’s deadline is past; you violated it, as though that were an excuse for tackling and injuring a person. There is no reason that Eric couldn’t not have been carefully and safely removed by so many police if they were trained in law enforcement.

Video by journalist Eric Poemz who was taken down Link: http://youtu.be/eFWeJ7iWEUs

Big – many overfed- Police “Rush” (Waddle?) Water Protestors and Tackle them. And possibly break the hip of one, and then show no compassion.

“ActivateNow Live Reporting: Interview with Oglala Lakota Elder from Pine Ridge About today’s Treaty Stand” http://youtu.be/pqTS6mUeu4s
#ActivateNow https://www.facebook.com/ActivateNowUS/?hc_ref=PAGES_TIMELINE# #StandingRock. She reminds people that they are matriarchal societies and that the women choose the chief-leaders, traditionally.
Update: https://twitter.com/RuthHHopkins/status/834834114289217536

What if there were an emergency in Wisconsin and the police are away doing the will of the oil industry?
“The Emergency Management Assistance Compact (EMAC) is a mutual aid agreement between states and territories of the United States. It enables states to share resources during natural and man-made disasters, including terrorism.
EMAC complements the national disaster response system. EMAC is used alongside federal assistance or when federal assistance is not warranted. EMAC facilitates the maximum use of all available resources within member states’ inventories.”
https://en.wikipedia.org/wiki/Emergency_Management_Assistance_Compact

Paul Singer was a major donor to Governor Scott Walker. Trump was a smaller donor to Governor Scott Walker:
Last week Trump said: “Paul Singer has just left.  As you know, Paul was very much involved with the anti-Trump, or, as they say, “Never Trump.”  And Paul just left and he’s given us his total support.  And it’s all about unification.  We’re unifying the party, and hopefully we’re going to be able to unify the country.  It’s very important to me.  I’ve been talking about that for a long time, but it’s very, very important to me.  So I want to thank Paul Singer for being here and for coming up to the office.  He was a very strong opponent, and now he’s a very strong ally.  And I appreciate that.” https://www.whitehouse. gov/the-press-office/2017/02/16/remarks-president-trump-press-conference

Some related, or possibly related links:

Wisconsin media confirm that they sent police: “Wisconsin again sends 17 State Patrol officers to North Dakota protest camp” MATTHEW DeFOUR Wisconsin State Journal, Madison . com. The article says that those state police sent to Standing Rock protests in the past “reported after the assignment that they should replace name tags with badge numbers to protect their privacy,…” The dates given were Feb. 21 to March 1, 2017.