The information from PEER, found below, is especially critical with the upcoming Private Nuclear Waste “Interim” Storage Facility Comment deadline TODAY, 11.59 PM Eastern Time(NY-Boston-DC-Atlanta, Miami, etc.) 11.59 PM is 1 minute to midnight; 1 minute to Saturday. Comment here: https://www.regulations.gov/document?D=DOE_FRDOC_0001-3256 ID: DOE_FRDOC_0001-3256. It is easy and can still be anonymous. As they note, the radiological emergency which can make the PAG kick in could be from transport of nuclear waste and presumably from an interim storage facility. The proposed facility is open-air.

Remember that nuclear utility Exelon was called the President’s utility under Obama. This is Obama’s poison gift. Where were the renegade tweets then? PEER had to sue for additional information. While President Trump learned the dangers of nuclear from his uncle, he has received a large campaign donation from nuclear waste company, Energy Solutions, owner Doug Kimmelman. Exelon donated an unknown amount to Trump’s ball.

We further discuss the serious hazard of the US PAG rules below the news release. The PAG exposure levels allowed are much higher than the US EPA and US government admit due to various tricks.

The “Protective Action Guide (PAG) for Drinking Water after a Radiological Incident” was finalized today by its publication in the Federal Register. This policy lets the public consume water containing radiation at levels hundreds and thousands of times what is permitted for the more than 100 chemical elements that can emit radiation (radionuclides) under the Safe Drinking Water Act.

“Since this policy authorizes leaving people in contaminated zones and not providing them bottled or other potable drinking water for long periods, it should be called a ‘Protective Inaction Guide,’” stated Jeff Ruch, Executive Director of PEER which had to sue EPA to force release of information specifying what levels of which radionuclides EPA would permit public exposure to. “Under this policy, affected Americans would be guinea pigs in an untimed radiation experiment.”

In its final action, the EPA claims to have tightened the policy with respect to duration of public exposure, the nature of the triggering event and protections for infants and nursing mothers. PEER disputes the accuracy and efficacy of these supposed mitigations for the following reasons:

* Duration. These rollbacks cover the “intermediate period” after the radiation release has been brought under control (not necessarily stopped but no longer growing). EPA now contends that this period may last for “week to months but not longer than a year.” However, the PAG itself states that the early, intermediate and late “phases cannot be represented by precise periods of time” and suggests their duration be viewed as “in terms of activities, rather than time spans.” Nor does EPA specify what happens if this intermediate period extends beyond a year;

* Trigger. EPA now says application of the PAG is limited to “nationally significant radiological contamination incidents” but does not define the term. The PAG itself states that it covers “a wide range of incidents,” not just reactor accidents but also spills. By contrast, the EPA website FAQ posting says the PAG applies in “any radiological emergency”; and

* Sensitive Populations. The PAG allows 500 millirems (mrem) of radiation exposure for the general population but only 100 mrem for the most sensitive populations (e.g., infants, children, pregnant women and nursing women). But EPA never explains how non-nursing children will get only one-fifth the radiation their parents receive in situations lacking clean drinking water.

“EPA’s qualifications tacitly concede the dangers to public health but do little to solve them,” added Ruch, noting that PEER is considering a lawsuit to nullify the PAG. “Among other legal vulnerabilities, this policy flies in the face of the anti-backsliding requirements of the Safe Drinking Water Act.”
###
View the Federal Register notice
https://www.gpo.gov/fdsys/pkg/FR-2017-01-19/pdf/2017-01230.pdf
Examine redline showing recent EPA rewrites
http://www.peer.org/news/news-releases/assets/docs/epa/1_19_17_PAG_Redline.pdf
See EPA’s public relations motivation for the PAG
http://www.peer.org/news/news-releases/news/news-releases/radical-drinking-water-radiation-rise-confirmed-in-epa-plan.html
Look at the full Drinking Water PAG
https://www.epa.gov/sites/production/files/2017-01/documents/epa_pag_manual_final_revisions_01-11-2017_cover_disclaimer_8.pdf Read the non-explanatory EPA blog posting
https://blog.epa.gov/blog/2017/01/epa-providing-guidance-for-drinking-water-after-radiological-emergency/” Emphasis our own. See the original and more here:  http://www.peer.org/news/news-releases/fig-leaves-no-cover-for-drinking-water-radiation-rollback.html There is a “Give” button in the upper right-hand of the PEER web site page. THANK YOU PEER!

For information about the spent fuel casks see: https://sanonofresafety.org

As you read the PAG (p. 6) please note that according to the US government funded BEIR VII report per 100 mSv of exposure there would be an estimated 1 excess cancer case per 100 people (1%). Based on a newer government funded study of nuclear workers from late 2015, cancer rates from radiation exposure may be 15 times worse than even BEIR VII thought, perhaps even higher. This would mean around 15 excess cancers per 100 mSv per one hundred people (15%). Around half will die, on average at around retirement – what BEIR calls life-shortening cancers (average life expectancy shortened by 14 to 15 yrs): https://miningawareness.wordpress.com/2015/12/19/another-look-at-the-recent-low-dose-radiation-exposure-study-inworks/ These are based on larger populations of 100,000 people. Thus, 1,000 excess cancer cases to 15,000 excess cancer cases, or more, per 100,000 people exposed to 100 mSv.

It’s impossible to evaluate the hazard without knowing exactly the ratios of each radionuclide type likely present, or becquerels of each radionuclide type present, from which one can estimate mrem or mSv exposures. Currently the US FDA allows around 15 times more radiation in food than Japan all of the time, because they have decided to assume that only part of the food is contaminated.

With fully contaminated food the exposure rate increases around 5 fold what the PAG alleges from the alleged 5 mSv to 18mSv to 28 mSv for totally contaminated food, depending on whether the accident is waste or an operating reactor. And, that’s only calculating for a few radionuclides. Furthermore, this amount is allowed all of the time and not just when there is an accident.

Similar tricks were played with the water intake. As PEER notes, however, the full spectrum of radionuclides is rarely listed or discussed. Such is the current case. Based on a water intake of 3.7 liters per day (assuming dry food and sweating in enclosed spaces) the annual intake would be 1350.5 liters (kg). Based only on Strontium 90 (10.4 mSv), Iodine 131 (11mSv) and Cesium 137 (11 mSv) the water exposure for one year would be approximately 32 mSv. However, Cesium 134 is discharged at around the same rate as Cesium 137 from an operating reactor. Gram per gram it is 13.6 times greater in specific activity and becquerel for becquerel it is slightly more dangerous. Therefore there would be around 13.6 times more becquerels from Cs 134 than from Cs 137. Since the EPA ignores 134 and only gives 629 Bq/kg Cs 137 there would presumably be 8554.4 Bq of Cs 134 for a nuclear reactor accident. Cs 137 only it is 11 mSv. Cs 134 based on 8554 Bq/kg is 219 mSv. Reduced slightly for half-life would put it at around 192 to 200 mSv, depending if the accident is ongoing and the distance. Thus, the food and water intake could be over 200 mSv.

Just based on the information given in PAGs and by the FDA exposure could easily exceed 100 mSv within the first year.

Even at face value and using BEIR the risk is very high and unnecessarily so. For the first 4 days up to 50 mSv exposure from inhalation and general exposure is allowed, and relocation in the first year is supposed to be at 20 mSv. It is unclear if this is the first year after the 4 days or includes the 4 days. This excludes food and water.

Based on the limited number of radionuclides given for food the maximum adult exposure allowed by the US FDA if all food were contaminated is around 14 to 28 mSv – with the lower number being for nuclear waste and the higher number a nuclear accident. As we have seen the water intake exposure could be over 200 mSv. Lower contaminated water intake would be lower radiation risk. However, too little water intake and one dies of dehydration.

If the 50 and 20 mSv are for one year, and the food is contaminated at 28 mSv, and the water at over 200 mSv we easily arrive at an estimate of 300 mSv in the first year alone! According to BEIR VII that would be 3% additional cancers in the population, but according to new research it could be 45% or more.

For children, EPA estimates would provide only around 25 to 45% of their water needs, meaning that exposure is greatly underestimated, too. While women appear to come out slightly better than men, as their average water needs are less, their cancer risk is higher than men for the same exposure levels. Those who wish to calculate dehydration rate and exact water intake may look at this USDA document: https://fnic.nal.usda.gov/sites/fnic.nal.usda.gov/files/uploads/73-185.pdf

Fission Product Yield Showing that there is around the same amount – actually more – Cs 134 produced per Cs 137. 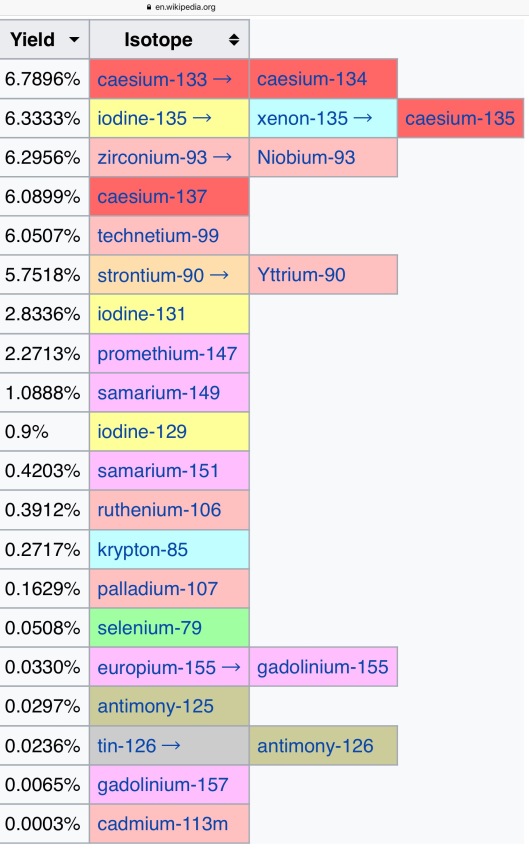 Note that the above are estimates based on very incomplete information and just to give a generally idea of how much the US (and other governments) are underestimating risk. There is no safe dose of ionizing radiation. Even one becquerel-ionizing track could set off a chain of events leading to cancer or other genetic damage.