Exxon Neftegas Limited, a Bahamas based subsidiary of U.S.-based ExxonMobil, is 30 percent owner and the operator of the Sakhalin I project; Russian majority state owned Rosneft’s subsidiaries Sakhalinmorneftegas-Shelf and RN-Astra have 11.5 percent and 8.5% for a total of 20%. Japanese consortium SODECO owns 30 percent; India state-owned oil company ONGC Videsh Ltd., 20 percent: https://en.wikipedia.org/wiki/Sakhalin-I. https://en.wikipedia.org/wiki/Rosneft (These numbers from wikipedia have been checked against the Sakhalin web site and are up to date.)

Sanctions against Russia? Whether or not ExxonMobil-Tillerson are violating the letter of the law regarding sanctions, they are violating the spirit of the sanctions. And, one might suspect that they are using their Bahamas based Exxon Neftegas subsidiary, perhaps in conjunction with other offshore subsidiaries, to skirt sanctions.

Despite expert scientific advice and growing concerns about the potential impact on the area’s few remaining western gray whales, Exxon Neftegas Limited (ENL) is forging ahead with plans to expand its oil and gas operations in Sakhalin in the Russian far east – even though less disruptive alternatives exist.

ENL’s controversial decision to construct a pier in Piltun Lagoon – as part of the expansion of the ‘Sakhalin 1′ project – has come in for repeated criticism in recent years from NGOs and scientists, including the scientific committee of the International Whaling Commission and the Western Gray Whale Advisory Panel (WGWAP), which has been providing independent scientific advice to companies in Sakhalin for over a decade and expressed its concerns about the ENL project in May.

A month later, a coalition of NGOs wrote to ENL urging it to suspend all shipping operations in Piltun Lagoon since it had not implemented effective mitigation measures to protect gray whales, which number only 174 and migrate to the region’s rich feeding grounds in summer, or the lagoon’s fragile ecosystem.

But ENL refused and the first vessels are due to start powering through the lagoon in the coming days – unofficially monitored by NGO representatives, who headed for Piltun over the weekend.

“Exxon NL has ignored all our advice, including our call to suspend shipping operations in Piltun, and is carrying on regardless of the clear danger to the whales and the lagoon itself,” said Alexey Knizhnikov,

Extractive Industries Environmental Policy Officer, WWF-Russia. “Soon
we will be seeing tugs and barges here rather than whales.”

The WGWAP highlighted a number of key concerns with the ENL project, including increased noise levels from tugs and barges that could drive mothers and calves away from their preferred habitat, and the potential for more whales to be struck by ships. In addition, the plan also threatens the lagoon’s ecosystem, crucial to the productivity of feeding areas for western gray whales, through dredging and sand dumping, and the risk of toxic spills if ships run aground.

In an attempt to open dialogue and allay concerns, Exxon NL shared its Marine Mammal Protection Plan with the NGOs, which reviewed the plan and revealed some glaring weaknesses.

“Nothing in Exxon NL’s plan justifies its shipping operations in Piltun Lagoon because it lacks effective means to mitigate impacts on surrounding environment and marine mammals,” said Dmitry Lisitsyn, the Head of Sakhalin Environmental Watch. “In particular, there are no measures in place to reduce the impact of underwater noise on gray whales despite all the evidence that the increased shipping will produce unsafe and disruptive levels of noise. Worst of all: Exxon NL does not even need to do this as there are acceptable alternatives that are far less harmful.”

In 2013, a public environmental impact assessment concluded that “…an oversize cargo delivery option, different from the one currently proposed in the project, has to be selected due to the unacceptably high impact on…the population of gray whales and sea mammals.”

Meanwhile, the WGWAP reported in 2014 that other approaches, such as hauling cargo across the spit rather than through the lagoon mouth, could accomplish ENL’s objectives without the need for any of the disruptive and risk-prone activities that the company proposed.

Exxon NL argues that its plans meet Russian environmental requirements, have been approved by the authorities, and have all the necessary permits – and so operations will start as scheduled.

“The WGWAP has worked in partnership with another oil and gas company, Sakhalin Energy, the operator of the ‘Sakhalin 2′ project to minimize the impact of its operations on the whales and the ecosystem, but Exxon NL has shown little interest in listening to scientific advice – let alone adopting their recommendations,” said Knizhnikov. “The result could be a tragedy for the whales and the lagoon.”
© 2016 WWF – World Wide Fund For Nature (also known as World Wildlife Fund) Creative Commons licence, BY-NC: http://wwf.panda.org/?uNewsID=273050&utm_source=feedburner&utm_medium=feed&utm_campaign=Feed%3A+wwf%2Fspecies+%28WWF+-+Species+News%29&utm_content=Google+International (Emphasis our own).
https://creativecommons.org/licenses/by-nc/4.0/deed.en

Exxon-Neftegas-Board-of-Directors 1998-2001 Tillerson.
Recent Panama Papers scoop by the German Süddeutsche Zeitung and shared with the ICIJ: 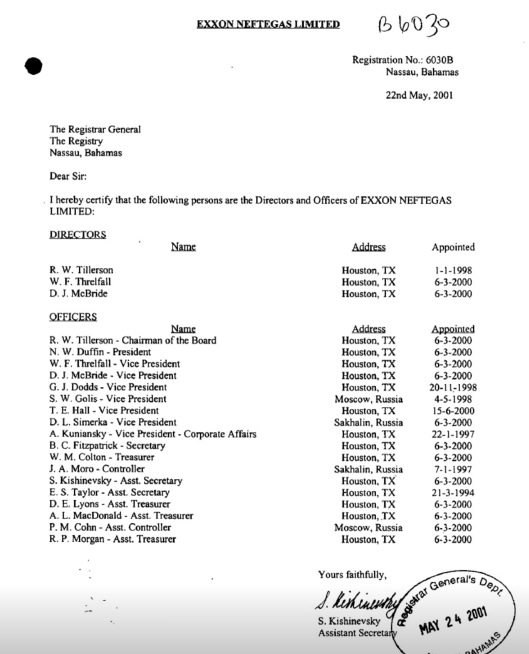