“Treasury’s mission highlights its role as the steward of U.S. economic and financial systems, and as an influential participant in the world economy.“. https://www.treasury.gov/about/role-of-treasury/Pages/default.aspx

“Steve Mnuchin, a hedge fund CEO and former Goldman Sachs Vice President who profited off of mortgage foreclosures,… In the aftermath of the 2008 financial crisis, Mnuchin purchased IndyMac Bank (renamed One West Bank) from the Federal Deposit Insurance Corporation (FDIC). http://www.warren.senate.gov/files/documents/2016-11-15-Trump_Letter.pdf
“Central to the deal was a promise by federal regulators to cover a significant share of the bank’s losses — a guarantee that lasts through 2019. In addition, the bank — later renamed OneWest — has repeatedly faced criticism over its attempts to foreclose on homeowners who were in the process of modifying their loans, among other practices.” https://www.washingtonpost.com/business/economy/candidate-for-treasury-secretary-helped-run-bank-that-is-accused-of-bias/2016/11/17/6c7dab5e-acd6-11e6-a31b-4b6397e625d0_story.html “Under his leadership, the bank became a ‘leader in foreclosing on seniors.’ In 2014, Mnuchin sold One West Bank for a handsome sale price of $3.4 billion.” http://www.warren.senate.gov/files/documents/2016-11-15-Trump_Letter.pdf

“During the campaign, Donald Trump told the American people that he was going to change Washington by taking on Wall Street. Donald Trump’s choice for Treasury secretary, Steve Mnuchin, is just another Wall Street insider.

That is not the type of change that Donald Trump promised to bring to Washington – that is hypocrisy at its worst.

After his bank pocketed billions in taxpayer dollars from the bailout, Mnuchin moved on to make a fortune running another bank that aggressively foreclosed on families still reeling from the crisis. This pick makes clear that Donald Trump wants to cater to the same Wall Street executives that have hurt working families time and again.”
###. http://www.warren.senate.gov/?p=press_release&id=1309

From Wikipedia: “Mnuchin accrued a net worth estimated at about $40 million while working for Goldman Sachs for 17 years, where his father had worked for three decades.[10][11] Mnuchin became a partner at Goldman in 1994.[12] In 2002, Mnuchin left Goldman and worked briefly for his Yale roommate Edward Lampert, chief executive of Sears Holdings. In 2004, he founded a hedge fund, Dune Capital Management, named for a spot near his house in the Hamptons. The firm invested in at least two Donald Trump projects and, in one of them, was sued by Trump before a settlement was reached. Then, in partnership with George Soros, hedge fund manager John Paulson and others, Mnuchin bought the failed housing lender IndyMac in 2009 for $1.6 billion.[13]” https://en.wikipedia.org/wiki/Steven_Mnuchin

From the Washington Post: “Central to the deal was a promise by federal regulators to cover a significant share of the bank’s losses — a guarantee that lasts through 2019. In addition, the bank — later renamed OneWest — has repeatedly faced criticism over its attempts to foreclose on homeowners who were in the process of modifying their loans, among other practices.” https://www.washingtonpost.com/business/economy/candidate-for-treasury-secretary-helped-run-bank-that-is-accused-of-bias/2016/11/17/6c7dab5e-acd6-11e6-a31b-4b6397e625d0_story.html

From Wikipedia: “The bank, purchased out of bankruptcy from the FDIC, was renamed OneWest, with Mnuchin as chair. According to The New York Times, OneWest “was involved in a string of lawsuits over questionable foreclosures, and settled several cases for millions of dollars”. OneWest was sold to CIT Group in 2015[10] for $3.4 billion.[13] The California Reinvestment Coalition, which opposed CIT Group’s acquisition of OneWest, submitted a FOIA request to United States Department of Housing and Urban Development (HUD) to learn more about OneWest’s reverse mortgage subsidiary, Financial Freedom. According to the data that HUD provided in its FOIA response, Financial Freedom foreclosed on 16,220 federally insured reverse mortgages from April 2009 to April 2016. This represents about 39% of all federally insured reverse mortgage foreclosures during that time frame. The 39% figure was criticized by CRC, who estimated that Financial Freedom only serviced about 17% of the market. In other words, Financial Freedom was foreclosing at twice the amount that one would expect, given its share of the market.[14] CIT Group disclosed to investors that it had received subpoenas from HUD’s Office of the Inspector General in the third and fourth quarters of 2015.[15] In November 2016, two nonprofits filed a complaint with the Department of Housing and Urban Development, alleging redlining by OneWest Bank.[16] Bloomberg suggests that Mnuchin owns $97 million in CIT stock, as of August 2016.[17]” https://en.wikipedia.org/wiki/Steven_Mnuchin
(Emphasis added) 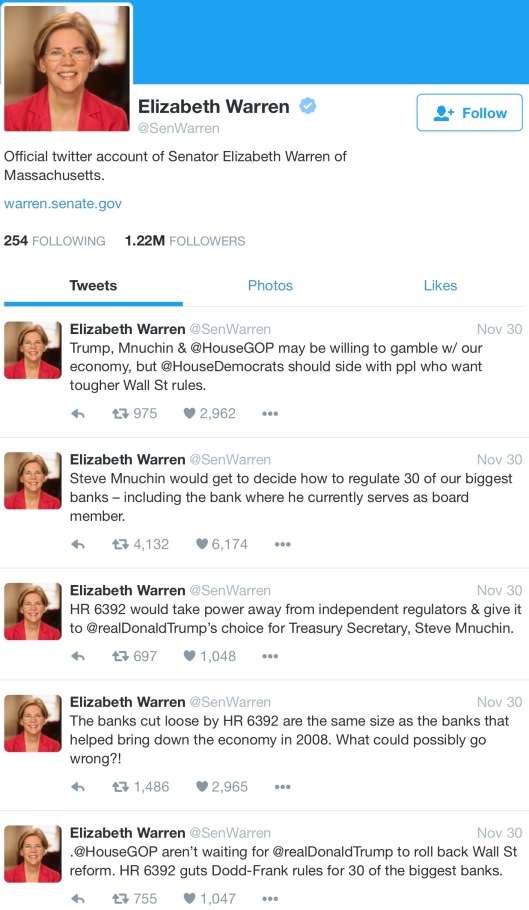