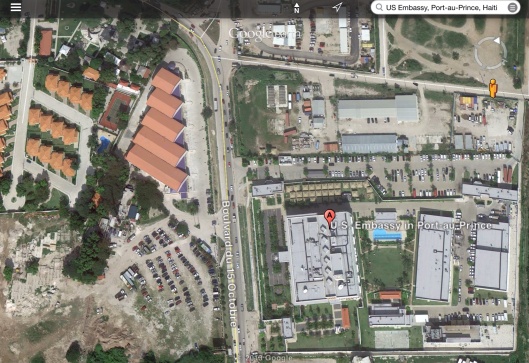 US Embassy Compound Haiti Across from Gated Community for Embassy Workers

What is Union School in Haiti where a Monica Petersen is listed as a teacher for the 2016-2017 school year (believed to be the Monica Petersen who is said to have recently died in Haiti)? Union School was founded in 1919, for the children of US Marines, subsequent to the 1915 US invasion of Haiti.

Currently, Union School is a US government funded High School in Port-au-Prince Haiti, at a great distance from the region where Monica had supposedly done research on human trafficking, and allegedly intended to do more. Poor infrastructure makes the distance even greater.

Union School is also a grotesquely high-priced “elite” “prep school” for the children of US government officials, other expats, and Haitians with plenty of money in a desperately poor country. One graduate is President Martelly’s wife, Sophia. The cost of tuition for high school students is over $13,000 per year, which, to give an idea, is slightly above the US annual income poverty level for one person. It would be difficult for this sort of annual tuition to come from honest money anywhere, especially in Haiti (although in the US not impossible, depending on the definition of honest). It would be interesting to know if this school is free to the children of US embassy workers or if they get a special stipend, or if they pay from their inflated salaries. The US State Department doesn’t specify how much funding is given, but they do give some funding through the “Office of Overseas Schools”, and the amount must be someplace. One can speculate that they pay for school expenses not covered by tuition. (See US State Department description of the school at the bottom of our post)

The Union School is supposed to be certified as a US high school equivalent. And, yet, Monica Petersen who was supposed to have an undergraduate degree in Social Anthropology and a Master’s Degree from Korbel School of International Studies is listed as teaching High School US History, US Government, and even Entrepreneurship at Union School. Let’s hear that again – a social anthropology undergrad degree with an international studies master’s degree teaching US History, US Government, and Entrepreneurship (Business)! Furthermore, within most – maybe all- US states a high school teacher must either hold degrees in education or undergo special training and certification in order to teach, in stark contrast to college-university professors, who can theoretically teach with “only” a Masters or Ph.D. in the field of interest.

In short, based on the information which can be found, Monica was not qualified to teach the courses at this overpriced high school. Once again, this is if it’s the same Monica.

Furthermore, no one who was a true advocate of social justice, and who was energetic enough for an internet search or two, or had read a book about Haiti, would consider working at this school. They would not be able to stomach it. Instead, they would consider schools affiliated with the Aristide Foundation, or some other schools meant to serve the poor.

In a little bit of text attributed to Monica online, we find someone who apparently didn’t know when George Bush, Sr., Bill Clinton, and George Bush Jr. were president; nor the years of the coup d’etats against former Haitian president Aristide, nor, the fact that Clinton invaded to bring President Aristide back (in 1994) – he didn’t remove him. If she had any knowledge of these facts, she would not have falsely claimed that it was Clinton who removed Aristide, whereas it was the Bushes both times. And, yet, they had her teaching US History and Government?

In another little bit of text attributed to Monica, one finds that she reportedly arrived in Haiti in August of 2015. Although she supposedly wrote on the 15th of August that she was down in Haiti doing research for the next 3 weeks on human trafficking, we aren’t told when she arrived. The parliamentary elections were on August 9th and a couple of months before the Haitian presidential elections had been planned: “Parliamentary elections were held in Haiti on 9 August 2015, with a second round planned initially on 25 October. Two-thirds of the Senate and all members of the Chamber of Deputies were up for election. The second round of the parliamentary elections that has been suspended in 2015 should take place in October 2016, alongside with the first round for a third of the Senate and the first round of the whole new presidential election.“. https://en.wikipedia.org/wiki/Haitian_parliamentary_election,_2015–16. https://en.wikipedia.org/wiki/Haitian_presidential_election,_2015 . She supposedly died on the 13th of November, exactly one week before the Haitian Presidential Election runoff: https://en.wikipedia.org/wiki/Haitian_presidential_election,_2016–17 Is all of this a mere coincidence? Is she really even dead?

Remember where Monica supposedly graduated from school: the Josef Korbel School of International Studies. Students from Korbel “have interned with the U.S. Department of State, the U.S. Department of Defense, the United Nations, the FBI, the OECD, and World Vision International,among others“. https://en.wikipedia.org/wiki/Josef_Korbel_School_of_International_Studies Korbel and its graduates seem to be very much at the heart of US government foreign affairs. See: https://miningawareness.wordpress.com/2016/11/23/monica-petersen-condolezza-rice-korbel-school-and-the-haitian-elections-monica-dead-or-us-gov-agent/. Strangely, there is no record of her Master’s thesis. Did she do an internship instead of a thesis? Or? Normally Master’s theses titles may be found online.

The US State Department really should report about Monica’s death, if she is dead. Since she was an American abroad she is their responsibility and she was working at a school funded by them and hence by the US taxpayer. Where is the notice on the Haiti Embassy web site? Where is the notice on the Union School web site? Why is everyone so tight-lipped? Isn’t it frightening and curious that someone could go abroad and apparently disappear and almost no one seems to care?

US State Department Page on Union School. The cost is at the bottom. 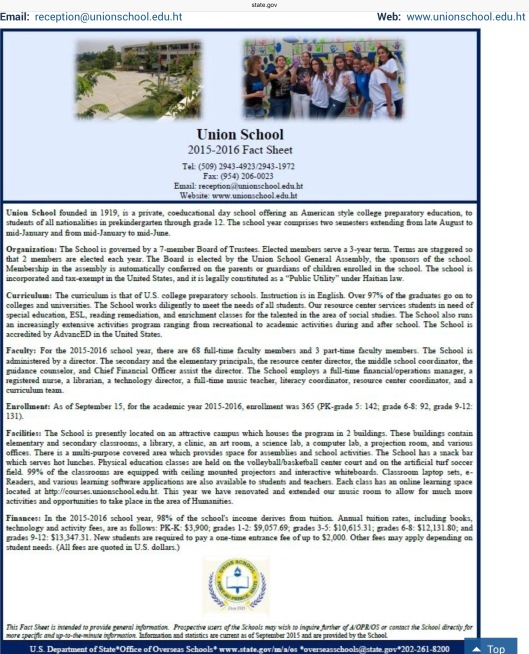 Does anyone recall what happened to the investigating judge who was examining allegations of corruption against Haiti’s Presidential Family (wife, Sophia Martelly and son Oliver)? He dropped dead. Multiple witnesses said that he met with Haiti’s President Martelly and Prime Minister Lamothe, and was threatened. Senate and Chamber Inquest Reports advised the impeachment of Martelly, Lamothe and the Minister of Justice. They concluded that the death was caused by fear. Others believe that Judge Joseph was poisoned. It seems that the corruption investigation has gone nowhere since the death of the judge. Additionally, Enold Florestal who filed the complaint against the Presidential family was arrested and put in jail. https://miningawareness.wordpress.com/2014/03/01/haiti-one-step-forward-in-getting-duvalier-and-the-martellys/ If you want a Haiti murder mystery, read our posts about the Mysterious Death of Judge Joseph.
It’s been so long since we wrote them that we no longer recall what is in them.

Disclaimer: Note that most of the above information can currently still easily be found online with searches. It is based on both information which is found online which was supposedly written by Monica Petersen – though there is no proof that it is indeed her work- as well as public information which was available in various places, such as the Korbel Human Trafficking Center Facebook page, and the Union School web site. In some places she was listed as social science teacher for Union, but the details indicate US history, US government, Entrepreneurship. Note that there are many Monica Petersens in the US. And, she was allegedly a nanny. While evidence points toward her being a US government agent, this may or may not have been the case. Perhaps she simply worked happily in the given environment without questioning or challenging. It is also possible that she saw corruption at the school and complained. Or that she simply pissed off some rich Haitian kid who had her killed. She may have been a victim of random crime. We probably will never know, as they said at her Memorial.

Lesson to be learned: Study your school and the source of funding for any scholarships and grants before going there; before accepting them. If you intend to go abroad, do your research and make sure you know what you are getting into. In the past students (and workers) got in trouble because they did not understand the source of funding. With the Internet there is little excuse not to do thorough research.

The shortest way to get from the US through the Panama Canal is by Haiti. Thus, as long as the US needs to send commercial or military shipments through the Panama Canal, the US will never allow Haiti to really be free. All of the rest of its problems appear an outgrowth of its important geostrategic location. The US first invaded in World War I when Germany had a lot of power in Haiti. Only if Haiti became a US State could it become quasi-free. But, Haiti wouldn’t accept this, and it is unlikely that the US would.

US poverty level: http://www2.census.gov/programs-surveys/cps/tables/time-series/historical-poverty-thresholds/thresh15.xls (Note that no one could live on this amount without sharing a household (e.g. renting a room); owning their own house in a homestead exception state; and possibly walking everywhere, growing their own food, etc. At a slightly lower amount one becomes eligible for subsidized housing, etc. in some states. It still remains a lot of money for tuition, especially for Haiti.)