Given President Obama’s close ties to Exelon which owns the most nuclear reactors in the US, no response from President Obama or his wife about the defective nuclear parts in US reactors (new ones continue to be documented by the US NRC) should come as no surprise. US Presidents have known about the problem since President Reagan, but apparently mostly ignored it. As Stephen Comley points out: “For every day this information was and continues to be ignored by these elected officials, committees and most of the media, they are jeopardizing the safety of the American people” http://pbadupws.nrc.gov/docs/ML1602/ML16021A038.pdf

If you see Axelrod commenting on television, remember who he is.
“…Mr. Obama’s chief political strategist, David Axelrod, has worked as a consultant to Exelon. A spokeswoman for Exelon said Mr. Axelrod’s company had helped an Exelon subsidiary, Commonwealth Edison, with communications strategy periodically since 2002…” (New York Times, 2008/02/03)

“Currently, evacuation strategies designed for a nuclear meltdown exclude our grandparents & the mentally handicapped & many of our school aged children. Instead of creating a just & fair exit strategy if tragedy struck, the Government has supplied bottles of Potassium Iodide for our grandparents & children to swallow & wait as radiation eviscerates our national treasures & the future of our country. These bottles of Potassium Iodide are what inspired me to begin my investigation in what safety measures were taken at our country’s nuclear power plants. My family owns & runs Sea View Nursing Home in Rowley, Massachusetts which lies 12 miles from the Seabrook Nuclear Plant in NH. Victor Stello, then Executive of Director of the NRC in replying to my questions suggested Potassium Iodide be given to special needs citizens administrated by caregivers who would be willing to stay behind in the event of a nuclear accident at Seabrook. This inhumane treatment lead to my persistent inquires into the Nuclear Industry & the United States Government; I could not stand by & let this go on any longer.” From the Stephen Comley letter to Mrs. Obama. (The US NRC appears to be in violation of the Americans with Disabilities Act, among other things)

The Nazis had it in for the weak and helpless too. They wanted them dead. 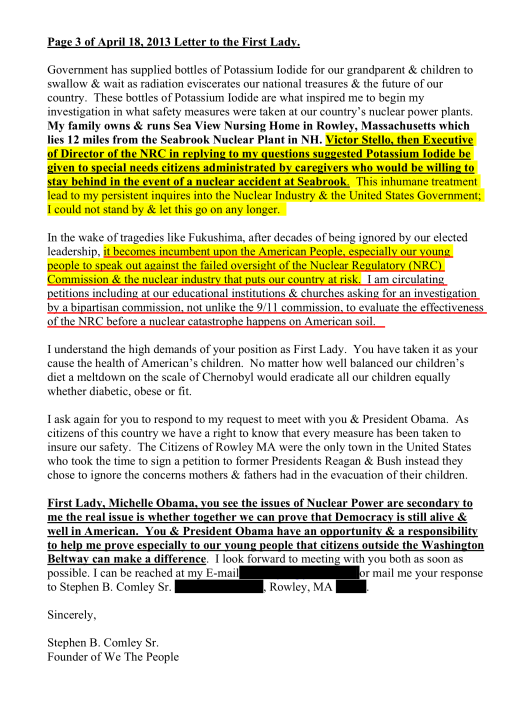 Comley’s figure for defective parts at Watts Bar Nuclear Site appears to be low:
“TVA cited for not testing nuclear parts” March 29th, 2013 by Pam Sohn Federal regulators have cited TVA with three more apparent violations at Watts Bar Nuclear Plant – this time over thousands of parts the utility purchased that are not documented as nuclear-grade quality. Tennessee Valley Authority officials and engineers then failed to maintain a quality assurance program to test and certify those parts as nuclear grade, according to the Nuclear Regulatory Commission and TVA. Now TVA must hire a contractor and pay for 30 or 40 experts to backtrack at least 6,200 shipments and purchases of different parts — some already installed and some dating back to 1995.” https://web.archive.org/web/20161024033323/http://www.timesfreepress.com/news/local/story/2013/mar/29/tva-cited-for-not-testing-nuclear-parts/103805/ Emphasis our own.

At the end of February 2016, seven US NRC engineers filed a complaint with the US NRC about electric design defects, “design vulnerability”, at all but one US nuclear power station, and demanded prompt regulatory action. (The NRC had been doing bureaucratic “paper pushing” for at least 4 years on the topic.) The engineers noted that “if the preferred power source, has an undetected open phase-condition, redundant trains of electrical equipment (electric motors that drive the pumps and valves) could burn out in few minutes and therefore will not be available for safe shutdown, even after restoration of an operable power source.” https://adamswebsearch2.nrc.gov/webSearch2/view?AccessionNumber=ML16050A223
But, the US NRC doesn’t even pretend that it do anything about this danger until 2019: “The NRC alerted reactor operators to the Byron Station operating event by issuing Information Notice 2012-03, “Design Vulnerability in Electric Power System,” dated March 1, 2012… Nuclear power plant operators are currently implementing the permanent solution for this issue and are expect to be done by Jan. 30, 2019.” http://www.nrc.gov/reactors/operating/ops-experience/open-phase-electric-systems.html BUREAUCRATIC PAPER PUSHING AND FOOT-DRAGGING TOTAL WILL BE OVER 7 YEARS, IF AN ACCIDENT DOESN’T OCCUR SOONER.

Watts Bar is but one of many nuclear power stations impacted by defective, substandard, parts.

“Former Secretary of State, Hillary Clinton during her Presidential run at a Campaign stop in Virginia took the time to talk with me & promised to look over the same information I had already given to Bill Burton & Jay Carney. Mrs. Clinton did reply back to WTP.” http://pbadupws.nrc.gov/docs/ML1314/ML13140A169.pdf This says that Hillary Clinton DID REPLY back. If she did reply, what was her reply?

“Some have said the FBI and former White House Chief of Staff, Leon Panetta’s letters to the Department (Enclosure 6) of Justice are old. Well, so are the Counterfeit Substandard Parts still in most if not all of the U.S. Nuclear Civilian and Weapons Plants… Reason I contacted Chairman Senator Chuck Grassley Committee is due to the fact President Obama’s Administration’s Internal Revenue Servivice conducted an audit of We The People’s 501 C-3 conservative non-profit organization. It should be noted the audit was completed without a finding. No reply to date. I have also contacted all of the Presidential Candidates who have poll numbers including the front runners, Dr. Ben Carson 9/30/2015 at UNH and Mr. Donald Trump (9/17/2015 in Rochester NH. Both of these confrontations can be viewed on You Tube or go to http://www.StephenComleySr.com Mr.Trump and Dr. Carson stated to me they would either get back to me about my issues or would meet with me. Neither one contacted me again. Vice President Joe Biden in my letter (enclosure 7) to him of February 25, 2015 and signed for by the White House. No Reply… First Lady, Michelle Obama (Enclosure 11) and my 3 letters written from 2008 – 2011 to President Barack Obama. All of these letters to the First Lady and to the President were all signed for by White House. No replies. Copies of other letters sent to Michelle Obama as well as others (Enclosures 12) involved in this matter. No Replies. For every day this information was and continues to be ignored by these elected officials, committees and most of the media, they are jeopardizing the safety of the American people.” (Stephen Comley letter to David Williams, may be read here: http://pbadupws.nrc.gov/docs/ML1602/ML16021A038.pdf or here: http://www.stephencomleysr.com/new-blog/2015/10/24/open-letter-to-david-williams-inspector-general-of-us-postal-service

“Ties to Obama Aided in Access for Big Utility”
By ERIC LIPTONAUG. 22, 2012 “John W. Rogers Jr., a friend of the president’s and one of his top fund-raisers, is an Exelon board member. David Axelrod, Mr. Obama’s longtime political strategist, once worked as an Exelon consultant, and Rahm Emanuel, the Chicago mayor and Mr. Obama’s former chief of staff, helped create the company through a corporate merger in 2000 while working as an investment banker.” Read the article here: http://www.nytimes.com/2012/08/23/us/politics/ties-to-obama-aided-in-access-for-exelon-corporation.html

“In late 1998, while Washington was in the throes of the Monica Lewinsky scandal, Rahm Emanuel, a departing senior political aide to President Bill Clinton, ventured out to an elegant restaurant in Dupont Circle… Mr. Emanuel’s biggest transaction came in late 1999 when he landed an advisory role for Wasserstein in the $8.2 billion merger of two utility companies, Unicom, the parent company of Commonwealth Edison, and Peco Energy, to create Exelon, now one of the nation’s largest power companies.” Read the article here: “In Banking, Emanuel Made Money and Connections” By MICHAEL LUO DEC. 3, 2008 http://www.nytimes.com/2008/12/04/us/politics/04emanuel.html

DemocracyNow.org reported in detail on this topic six years ago. Note especially their mention of the relationship between the Obama administration and Exelon Nuclear. Video and transcript here: http://www.democracynow.org/2010/2/18/nukes

McCain proposed 100 new reactors:
“In addition to being dangerous, John McCain’s nuclear plan is a costly distraction from the real solutions to global warming. Based on cost estimates for new nuclear power plants put forth by utilities like Florida Power and Light, McCain’s plan for 100 new nuclear plants could cost more than $1 TRILLION.” Obama misled people: “Barack Obama,… With regards to the role of nuclear power in general, Obama’s energy plan released yesterday states: “Before an expansion of nuclear power is considered, key issues must be addressed including: security of nuclear fuel and waste, waste storage, and proliferation.” Sierra Club, 2008-08-05, via Wikileaks: https://wikileaks.org/podesta-emails/emailid/1884 Obama just didn’t bother to mention that he wanted to make sure that Exelon’s aged nuclear reactors stayed open; nor that “non-proliferation” meant import of foreign nuclear waste to be dumped and buried in America. Due to closing of a few nuclear reactors he is within a loophole because building a few new ones to replace the old ones is technically not expanding nuclear power. Obama’s a lawyer, after all, as is Michelle Obama.