The US EPA Office of Inspector General (OIG) states that the US “EPA had authority, sufficient information to issue emergency order protecting Flint residents from lead-contaminated water as early as June 2015“. Nonetheless, Regina “Gina” McCarthy, head of the US EPA since July of 2013, decided to let Flint drink lead. More recently the US EPA, under her rule, has determined that Americans should drink highly radioactive water, when a nuclear accident occurs – one can’t say if, the question is only how quickly the next nuclear accident occurs: https://miningawareness.wordpress.com/2016/07/22/gina-mccarthy-says-let-them-drink-radioactive-water-100s-and-1000s-of-times-the-legal-limit-or-dehydrate-gina-and-moniz-dance-the-nuclear-waltz/ 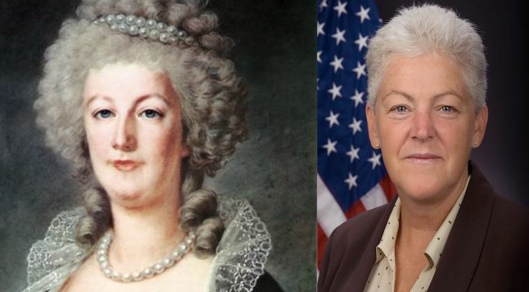 (We recommend that you watch the video on mute. The background music is inappropriate and appears trance inducing.)

“As Common Dreams previously reported, the EPA’s region 5 office knew as early as April 2015 that Flint’s public drinking water was contaminated with high levels of toxins, particularly lead… some Flint residents still don’t have access to clean water. On Tuesday, the ACLU of Michigan and the Education Law Center filed a class-action lawsuit, accusing the state of violating disability laws by not providing adequate special education services for children in Flint, even as exposure to lead has meant more children in the city require such services.” Read more here: http://www.commondreams.org/news/2016/10/20/internal-watchdog-blasts-epas-egregious-delay-flint-emergency-order

WASHINGTON – The Office of Inspector General (OIG) for the U.S. Environmental Protection Agency (EPA) today issued a finding that the agency had the authority and sufficient information to issue an emergency order to protect Flint, Mich., residents from lead-contaminated water as early as June 2015. The EPA did not issue the emergency order until seven months later, on January 21, 2016.

This finding results from an ongoing OIG program evaluation charged with reviewing the circumstances of, and the EPA’s response to, contamination in the city of Flint’s community water system, including the agency’s exercise of its oversight authority. After Flint switched its drinking water supply in April 2014, inadequate treatment exposed many of nearly 100,000 residents to lead.

“These situations should generate a greater sense of urgency,” said EPA Inspector General Arthur A. Elkins. “Federal law provides the EPA with emergency authority to intervene when the safety of drinking water is compromised. Employees must be knowledgeable, trained and ready to act when such a public health threat looms.”

The purpose of an OIG “management alert” is to emphasize the immediacy of concerns and need for action to appropriate EPA officials. This interim report informs the Assistant Administrator for Enforcement and Compliance Assurance about factors that delayed the agency’s intervention in Flint using its emergency authority under Section 1431 of the Safe Drinking Water Act. As steps toward mitigating future crises, the OIG is recommending that the EPA update 25-year-old internal guidance on the use of emergency authority, and require the agency’s drinking water and water enforcement management and staff to attend training on the use of such authority.

For more information, read the management alert, listen to a podcast about it and watch a related video at http://go.usa.gov/xkvwm.

The OIG expects to issue a final report at the conclusion of its program evaluation.

Separate from the OIG’s program evaluation, which is being conducted by analysts, OIG investigators are participating in an investigation led by the U.S. Attorney’s Office for the Eastern District of Michigan regarding potential criminal violations that may have led to the water crisis in Flint. These processes have different objectives.
— more —
Please visit the OIG’s website at http://www.epa.gov/oig for more information.

EPA OIG NEWS RELEASE – PAGE 2
The OIG is an independent office within the EPA that performs audits, program evaluations and investigations of the EPA and the U.S. Chemical Safety and Hazard Investigation Board, and their contractors, and prevents and detects fraud, waste and abuse. By helping the EPA and CSB operate more economically, effectively and efficiently, the OIG contributes to improved environmental quality and human health. The OIG strives to provide solutions to problems that ultimately result in making America a cleaner and healthier place. For more information, visit http://www.epa.gov/oig, follow the OIG on Twitter at @EPAoig (https://twitter.com/EPAoig) and view video coverage of topics impacting the American taxpayers at youtube.com/epaoig.” Original Press Release found here: https://www.epa.gov/sites/production/files/2016-10/documents/news_release-flint_management_alert_10-20-2016.pdf

NB: The delay may have been to increase foreclosure rates on homes, allowing investors to buy up homes for cheap and rent them once the water crisis was resolved. Our research suggests that this was why certain Republican members of Congress tried to block aid to Flint. Or, it may have been incompetence, or simple hate for the increasingly poor American people.