“Never doubt that a small group of thoughtful, committed citizens can change the world; indeed, it’s the only thing that ever has“. Margaret Mead

“In an unprecedented coordinated attack on Tuesday, protesters broke into valve stations at five remote locations to stop the flow of crude through arteries that pump around 15 percent of the oil consumed in the United States every day….The action on Tuesday underscored the vulnerability of the thousands of miles of pipeline in the United States that deliver energy to consumers“. (Reuters, 12 Oct. 2016, see below)

The valve turners expected to be arrested. Others, such as media, apparently did not.

“We are a movement bound by bonds of love and support. Let’s show these brave FOLKS, the SUPPORTERS, and THE FILM TEAM some serious LOVE. Bail for some individuals has been set as high as $75,000 — DONATE —” http://shutitdown.today/donate Images-Updates here: https://www.facebook.com/climatedirectaction/?fref=nf

“UPDATE 1-Canada-U.S. oil pipelines resume operations after activists halt flow Posted:Wed, 12 Oct 2016 15:38:06 -0400
NEW YORK, Oct 12 (Reuters) – Five oil pipelines disrupted by environmental protesters were back up and running on Wednesday, although at least one of the lines that carry millions of barrels of crude from Canada to the United States was operating at reduced rates.” http://feeds.reuters.com/~r/reuters/USenergyNews/~3/TEI-tErPqxU/usa-canada-pipelines-idUSL1N1CI17Z 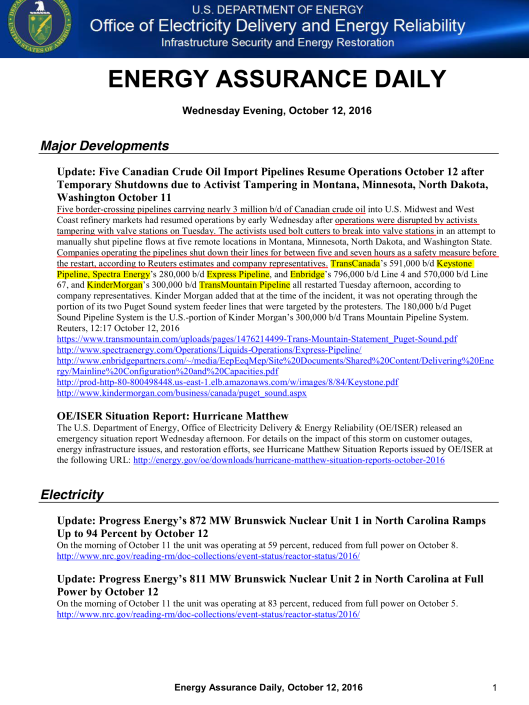 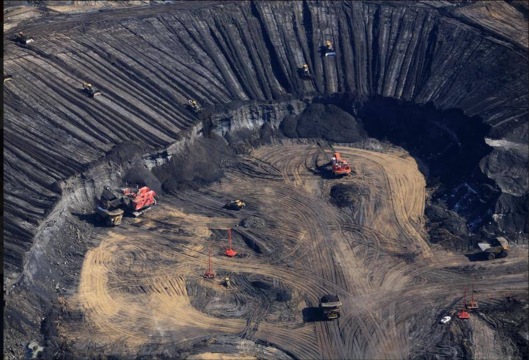 http://www.greenpeace.org/canada/en/campaigns/Energy/tarsands/
“Tar sands are mined and processed to generate oil similar to oil pumped from conventional oil wells, but extracting oil from tar sands is more complex than conventional oil recovery. Oil sands recovery processes include extraction and separationsystems to separate the bitumen from the clay, sand, and water that make up the tar sands. Bitumen also requires additional upgrading before it can be refined. Because it is so viscous (thick), it also requires dilution with lighter hydrocarbons to make it transportable by pipelines.” http://ostseis.anl.gov/guide/tarsands/

More on Colonial Pipeline leak: “Site access remains the largest obstacle to remediation. Not only from the poor roads and remote location, but the inability of personnel to approach the pond due to high explosive atmosphere readings and toxic vapors. Despite the use of respiratory protection, the potential for a catastrophic fire limits response efforts…

Colonial has managed to briefly operate a pump and removed an estimated 16,000 gallons of liquid from the pond. However, if the pond is estimated to conservatively be 3 feet deep, there is over a million gallons of liquid in the pond. Colonial is currently devising plans to deal with this volume on site. Temporary storage tanks have been mobilized to the site, but their capacity is currently about 250,000 gallons. Colonial has off-site storage available also, but transportation out of the remote area will complicate and delay these efforts….

At this time, site topography is preventing the gasoline from entering Peel Creek. The pond appears to be a former borrow pit, and only overflows after substantial rain. While this makes containment much easier, it also serves to concentrate the explosive and toxic vapors. Initial response efforts are focusing on responder health and safety and installing controls to prevent downstream migration if a sufficient rain event were to occur.” https://www.epaosc.org/sites/11818/files/Pelham_Pipeline_Spill_SITREP_1_final_09102016.pdf
https://www.epaosc.org/site/site_profile.aspx?site_id=11818

There is no need for pipelines or nuclear power: