According to the USNRC: “The long-term accumulation of uranium in equipment with an unfavorable geometry, particularly in process ventilation and scrubber systems, has been a recurring issue throughout the nuclear fuel industry.”

The accumulation in an unfavorable geometry can lead to a criticality accident. At Toshiba’s Westinghouse Facility the amount of uranium exceeded the criticality safety evaluation (CSE) mass limit by over three times.

“A criticality accident is an uncontrolled nuclear chain reaction. It is sometimes referred to as a critical excursion or a critical power excursion and represents the unintentional assembly of a critical mass of a given fissile material,… In the history of atomic power development, 60 criticality accidents have occurred, including 22 in collections of fissile materials located in process environments outside of a nuclear reactor or critical experiments assembly“. https://en.wikipedia.org/wiki/Criticality_accident

Thus, Toshiba appears to have uranium accounting issues at its Westinghouse SC Facility, along with financial accountng issues: “Toshiba confirms SEC investigation as accounting woes spread to US Securities commission and justice department examining ‘accounting problem’ at US units, says Japanese corporation, amid profit-padding crisis”
https://www.theguardian.com/business/2016/mar/18/toshiba-confirms-sec-investigation-as-accounting-woes-spread-to-us Who would guess that the Japanese were bad at accounting mathematics? It doesn’t correspond to our stereotype, now does it?

“PART 74—MATERIAL CONTROL AND ACCOUNTING OF SPECIAL NUCLEAR MATERIAL“http://www.nrc.gov/reading-rm/doc-collections/cfr/part074/index.html This seems to be special nuclear material. The notice was issued to “All holders of and applicants for a fuel facility license under Title 10 of the Code of Federal Regulations (10 CFR) Part 70, “Domestic Licensing of Special Nuclear Material” and 10 CFR Part 70, Subpart H, “Additional Requirements for Certain Licensees Authorized To Possess a Critical Mass of Special Nuclear Material.” Thus, they need to be accounting for the missing uranium, although there could be a loophole in the law (or not). The fact that Toshiba-Westinghouse claims to have not thoroughly cleaned the system in around 7 years or more also shows that they are not serious. If they did clean it out, then a lot of uranium is disappearing.

“The uranium-235 content of low-enriched uranium can be concentrated (i.e., enriched) to make highly enriched uranium, the primary ingredient of an atomic bomb.” http://www.nrc.gov/materials/sp-nucmaterials.html It seems that the material has been enriched, although it is not clear.

“During the most recent planned annual wet scrubber system cleanout at a low-enriched fuel fabrication facility” [Toshiba Westinghouse in Hopkins near Columbia South Carolina], “personnel noticed an abnormal amount of material buildup in the inlet transition region and associated ductwork (i.e., elbow). Over the course of the 2-day maintenance evolution, approximately 197 kilograms of material were removed from the scrubber transition region. The transition region is considered an unfavorable geometry from a criticality perspective. Because facility personnel assumed that this material had a low uranium concentration, operators attempted to break up and wash away the material to facilitate its removal. Facility personnel did not sample the material to confirm the uranium concentration before conducting any activities that could have disturbed the as-found condition. After the material was removed, grab samples of the material were taken to analyze for uranium concentration.

“After the cleanout activities were completed, the scrubber was restarted. The scrubber operated for 6 weeks and then facility personnel shut it down to perform another cleanout of the inlet transition region and elbow.

Facility personnel removed about 24 kilograms of material, which corresponded to approximately 5 kilograms of uranium” [24 kg x 0.445 is 11 kg. Did they do another grab sample or is the 5 kg wrong? Thus, there was 24 kg of material which appears to have been unaccounted for, which was found in the inlet transition after 6 weeks.]

“The scrubber was restarted following the 6 week cleanout. Approximately 1 week later, while discussing extent of condition“[They lost their “the” too.], the licensee decided to shut down the scrubber again and thoroughly inspect the entire scrubber to ensure that the scrubber was free of uranium accumulation.”

[So, after 6 weeks 24 kg of material was removed from the inlet transition, which would be approximately 208 kg per year, roughly corresponding to the 197 kg which they found initially. Then after one more week (7 weeks) and a more thorough cleaning there was an additional 184 kg plus 71 kg of material. That is 279 kg of material. If we take the high end of percentage weight, then that is 279 x 0.55 which is 154 kg of uranium]: “An additional 184 kilograms of material was removed from the scrubber body, and about 71 kilograms of material was removed from the packing material. The scrubber was shut down and the licensee commenced extent of condition and root cause evaluations and implemented several short-term corrective actions.” [What about the transition? Another 4 kg in one week? They can waste 4 kg like it doesn’t matter? The 184 kg plus 71 kg (255 kg) seems to be what had accumulated over the course of 7 years or longer throughout the system. If they had cleaned the entire system, as they should have but seemingly didn’t, and then found this amount in 7 weeks, it would mean that over 2 metric tonnes (2079 kg) of material goes missing (4574 pounds) over the course of a year – at 55% uranium that would be over a metric tonne of uranium unaccounted for. However, it appears that they hadn’t bothered to properly clean the system for around 7 years or more. There seems to have been 184 kg plus 71 kg or 255 kg accumulated over the course of 7 years (2009) or longer, i.e. 36.43 kg per year unaccounted for. How much have they been power hosing away?

Initially, in mid July the US NRC event notice stated that: “36 containers of material with a total gross weight of 210.4 kg was removed from the inlet transition during the cleanout on May 28th to May 29th. Grab samples were subsequently taken from each container and analyzed for uranium concentration. On July 13th, the EH&S department was made aware that the grab sample results averaged 47.8% U.” https://miningawareness.wordpress.com/2016/08/13/us-nrc-investigates-cause-of-uranium-build-up-at-toshiba-westinghouse-nuclear-fuel-facility-last-extensive-clean-up-7-years-ago/ This would mean that it was 100.6 kg of uranium or 221 pounds. This would mean that the safety limit was exceeded by 3.5 times, rather than 3. This is also closer to the 208 kg estimate based on the 6 week subsequent run. ] 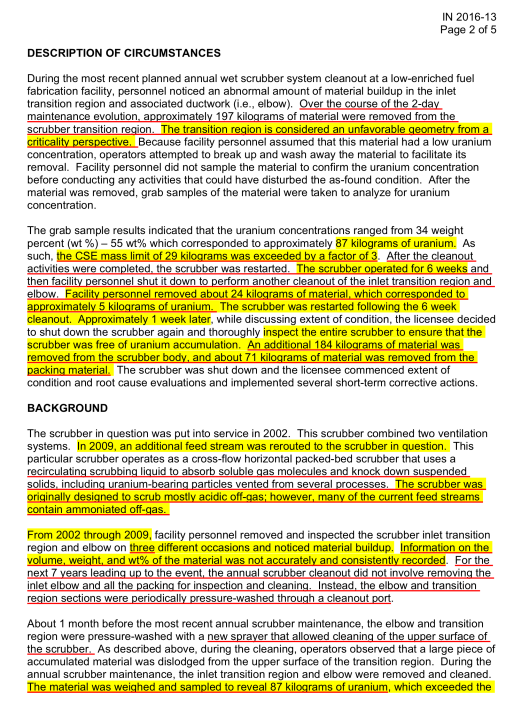 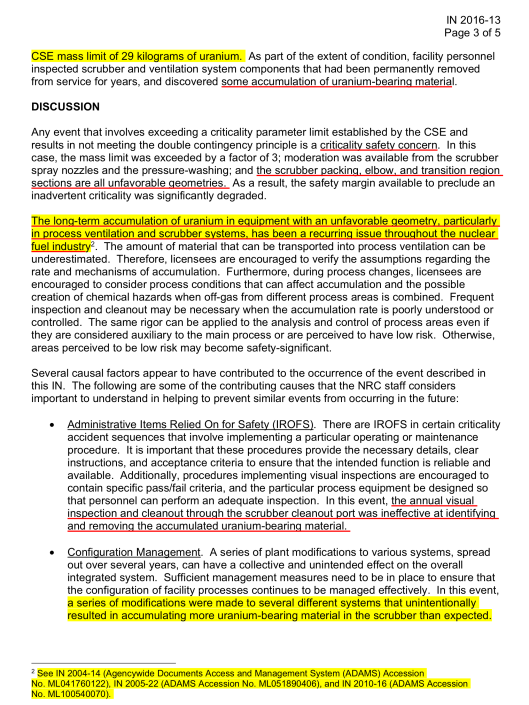 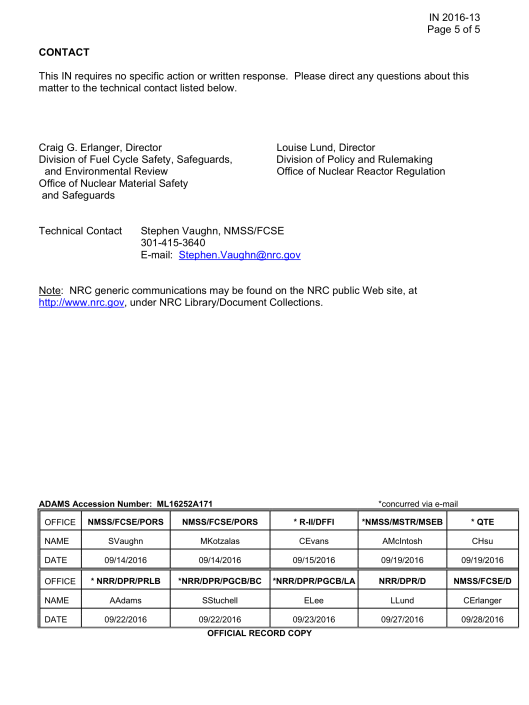