“Her Majesty’s Naval Base, Clyde (HMNB Clyde; also HMS Neptune) primarily sited at Faslane is one of three operating bases in the United Kingdom for the Royal Navy (the others being HMNB Devonport and HMNB Portsmouth). It is the service’s headquarters in Scotland and is best known as the home of Britain’s nuclear weapons, in the form of nuclear submarines armed with Trident missiles… HMNB Clyde lies on the eastern shore of Gare Loch in Argyll and Bute, to the north of the Firth of Clyde and 25 mi (40 km) west of Glasgow. The submarine base encompasses a number of separate sites, the primary two being:
* Faslane, 25 miles from Glasgow;
* RNAD Coulport, beside Loch Long, 2 mi (3.2 km) west of Faslane“.
https://en.wikipedia.org/wiki/HMNB_Clyde

Glasgow is the largest City in Scotland and the third largest in the UK. The population of Glasgow proper is 596,550 (2013), but the Metro area is estimated at 2.85 million. http://en.wikipedia.org/wiki/Glasgow
The vast majority of Scottish people were forced out by the British government and/or its policies, only for the land to be turned over to destruction by nuclear weapons and waste. Total world population of Scottish origin is almost 10 times greater than within Scotland itself: an estimated 28–40 million people of Scots origin worldwide: https://en.wikipedia.org/wiki/Scottish_people This is probably an underestimate as many of Scottish ancestry think that they are English or Irish.

The UK’s new nuclear sub model looks remarkably like the ones which England wants to get shot of by sending them to Scotland with the others, and possibly already has. 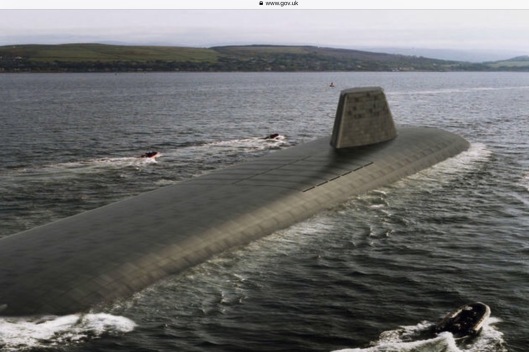 “Impression of how the UK’s new nuclear submarines may look”, Crown Copyright 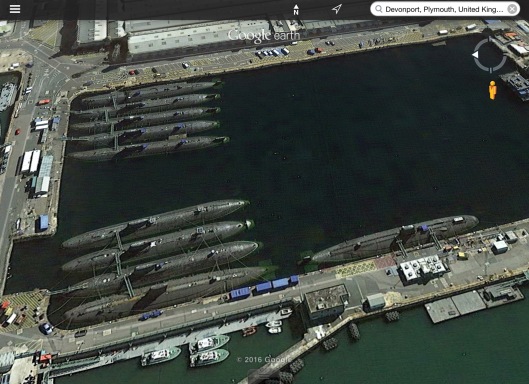 The UK is removing nuclear subs (or perhaps has already) from Devonport in England and sending them to Faslane, adding more to Faslane. They will do their upkeep in Scotland, leaking even more radioactive waste than usual into quasi enclosed Scottish Lochs-waterways. And, they will dismantle the old nuclear submarines in Scotland.

Furthermore, according to the article, they are already building more nuclear subs in Devonshire!

This is not only an issue of ethics or of nuclear weapons which could go off by accident, it is also a question of radioactive waste created, and transport of weapons, due to required upkeep of nuclear warheads. https://miningawareness.wordpress.com/2016/09/25/uk-nuclear-weapons-and-waste-convoys-imperil-scotland/

And, the nuclear subs which are stationed at Faslane routinely leak radiation into Scottish Lochs legally and sometimes illegally. They have mini-nuclear reactors and nuclear reactors leak by design.

The Successor project will now move into the next stage, known as ‘Delivery Phase 1’, with manufacturing work beginning on structural steel work for the ‘auxiliary machine space’ of the first submarine: this contains switchboards and control panels for the reactor. The money will also be spent furthering the design of the submarine, purchasing materials and long lead items, and investing in facilities at the BAE Systems yard in Barrow-in-Furness where the submarines will be built.

As part of our £178 billion equipment plan, the programme will be supported by a defence budget that will rise every year until the end of the decade, meeting the NATO commitment to spend two per cent of GDP on defence.

At a ceremonial event at the BAE Systems yard – the home of British submarine construction – next week, Mr Fallon will begin the work with a ‘steel cut’. Several hundreds of suppliers are expected to be involved in the programme at its peak, almost 85 per cent of those based across the UK – securing jobs from Scotland to the South of England.

Defence Secretary Michael Fallon said:
Britain’s ballistic missile submarines are the ultimate guarantee of our nation’s safety” [Unless they go off by accident, and ignoring the radioactive discharges. That is at least one reason why they are near Glasgow rather than London] “– we use them every day to deter the most extreme threats.

Along with increasing the defence budget to buy new ships, planes and armoured vehicles, this shows that this Government will never gamble with our national security.

The investment will support delivery of the manifesto commitment on which this Government was elected, to retain the Trident-based continuous at sea deterrent – the ultimate guarantee of our safety –and build the new fleet of four Successor Ballistic Missile submarines: securing thousands of highly skilled jobs in the UK.

That commitment was underlined in the 2015 Strategic Defence and Security Review and supported decisively by an overwhelming majority in Parliament on 18 July 2016, sending a strong message to the hundreds of companies involved in the submarine supply chain that they – and their tens of thousands of employees across the country – can keep planning for the future.

While visiting the BAE Systems site, the Defence Secretary will meet with the apprentices and shipyard workers who will build the UK’s cutting-edge deterrent capability. Mr Fallon will also tour the Devonshire Dock Hall where Audacious, Anson and Agamemnon, the fourth, fifth and sixth of seven Astute class nuclear-powered submarines, are currently under construction.

Tony Douglas, Chief Executive Officer of the MOD’s Defence Equipment and Support organisation, said:
A central part of this nation’s Defence, the Successor submarines will protect each and every one of us, as well as future generations.

The Successor programme is the MOD’s biggest project and it will require team work, tremendous skill, commitment from our industrial partners and the UK supply chain, and close collaboration with our US allies to deliver it successfully.
You can find out more about Continuous At Sea Deterrence here.
https://www.gov.uk/government/publications/uk-nuclear-deterrence-factsheet ”
OGL: https://www.gov.uk/government/news/building-to-start-on-new-nuclear-submarines-as-government-announces-13-billion-investment

Theresa Mary May (born Braiser) “is the Prime Minister of the United Kingdom and Leader of the Conservative Party. She has also been the Member of Parliament (MP) for Maidenhead since 1997“.
https://en.wikipedia.org/wiki/Theresa_May

Costain may well be one of the reasons for her support of the renewal of Trident: “Theresa May: It would be irresponsible to scrap Trident“, 18 July 2016 http://www.bbc.com/news/uk-politics-36820416

Costain was chosen as one of the construction companies to upgrade Barrow shipyard for the building of new Trident submarines. See: “Main contractors appointed for Barrow shipyard upgrade project“, By Nuclear Information Service, 7 December 2014: http://nuclearinfo.org/people/nuclear-information-service

For the proposed (and approved by Theresa May) Hinkley Pt Nuclear Power Station, C: “Marine Works (Costain) – This work involves the construction of the main cooling water tunnels and associated sea bed structures along with onshore connecting galleries. Pre-cast components will be fabricated off site. Three large tunnel boring machines will be used to create the 9 km of tunnels under the Severn Estuary.” http://web.archive.org/web/20150507070655/http://www.hinkleysupplychain.co.uk/construction-works-packages/

Scots: Total world population almost 10 times greater than within Scotland itself: an estimated 28–40 million people of Scots origin worldwide
Regions with significant populations
Scotland 4,446,000 (2011)
(Scottish descent only)
Almost three times as many in the United States as within Scotland
6,006,955 Scottish
5,393,554 Scotch-Irish
More in Canada than in Scotland
4,719,850
Australia
1,792,600
And, many other countries: https://en.wikipedia.org/wiki/Scottish_people