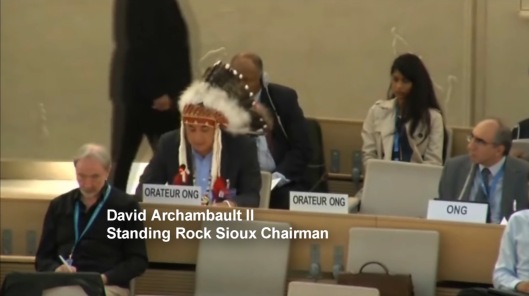 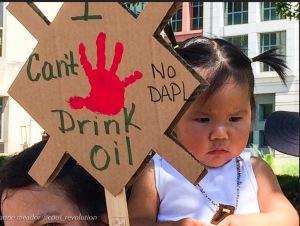 GENEVA (22 September 2016) – The United Nations Special Rapporteur on the rights of indigenous peoples, Victoria Tauli-Corpuz, today called on the United States to halt the construction of the Dakota Access Pipeline as it poses a significant risk to the drinking water of the Standing Rock Sioux Tribe and threatens to destroy their burial grounds and sacred sites.

Ms. Tauli-Corpuz’s call comes after a temporary halt to construction and the recognition of the need to hold ‘government-to-government consultations’ made by the US Departments of the Army, Justice and of the Interior. The 1,172 mile (1,890 km) pipeline is being built by the US Army Corps of Engineers and the Energy Transfer LLC Corporation.

“The tribe was denied access to information and excluded from consultations at the planning stage of the project and environmental assessments failed to disclose the presence and proximity of the Standing Rock Sioux Reservation,” the expert stressed.

“The United States should, in accordance with its commitment to implement the Declaration on the rights on indigenous peoples*, consult with the affected communities in good faith and ensure their free, and informed consent prior to the approval of any project affecting their lands, particularly in connection with extractive resource industries,” Ms. Tauli-Corpuz said.

The Special Rapporteur also warned that tribal leaders and community members who have turned to peaceful protests to halt the pipeline’s construction have been reportedly intimidated, harassed and prosecuted. “The US authorities should fully protect and facilitate the right to freedom of peaceful assembly of indigenous peoples, which plays a key role in empowering their ability to claim other rights,” she highlighted.

“I urge the United States Government to undertake a thorough review of its compliance with international standards regarding the obligation to consult with indigenous peoples and obtain their free and informed consent,” the expert said. “The statutory framework should be amended to include provisions to that effect and it is important that the US Environmental Protection Agency and the US Advisory Council on Historic Preservation participate in the review of legislation.”

(*) See the UN Declaration on the Rights of Indigenous Peoples: http://www.ohchr.org/EN/Issues/IPeoples/Pages/Declaration.aspx
The Special Rapporteur on the rights of indigenous peoples, Ms. Victoria Tauli-Corpuz (Philippines), is a human rights activist working on indigenous peoples’ rights. Her work for more than three decades has been focused on movement building among indigenous peoples and also among women, and she has worked as an educator-trainer on human rights, development and indigenous peoples in various contexts. She is a member of the Kankana-ey, Igorot indigenous peoples in the Cordillera Region in the Philippines. As Special Rapporteur, she is independent from any government or organization and serves in his individual capacity. Learn more, log on to: http://www.ohchr.org/EN/Issues/IPeoples/SRIndigenousPeoples/Pages/SRIPeoplesIndex.aspx   The Special Rapporteurs are part of what is known as the Special Procedures of the Human Rights Council. Special Procedures, the largest body of independent experts in the UN Human Rights system, is the general name of the Council’s independent fact-finding and monitoring mechanisms that address either specific country situations or thematic issues in all parts of the world. Special Procedures’ experts work on a voluntary basis; they are not UN staff and do not receive a salary for their work. They are independent from any government or organization and serve in their individual capacity. For more information, visit: http://www.ohchr.org/EN/HRBodies/SP/Pages/Welcomepage.aspx
UN Human Rights, country page – United States: http://www.ohchr.org/EN/countries/LACRegion/Pages/USIndex.aspx
– See more at: http://www.ohchr.org/EN/NewsEvents/Pages/DisplayNews.aspx?NewsID=20570&LangID=E