Below is a US BLM article about Patrolling the US and Canadian Border with Mustangs (despite the title). These horses descend from domesticated horses, but are tough and alert due to such long time in the wild. So, why did a BLM Advisory Board advise that they be killed? They are cheaper, and more effective than a wall due to their alertness. They probably noticed the Energy Fuels uranium mine fire: https://miningawareness.wordpress.com/2016/08/25/us-border-patrol-spots-energyfuels-uranium-mine-fire-in-texas-60-acres-burned-local-fire-department-forced-to-battle-fire/
“Mustangs Help Patrol U.S. – Mexico Border

With all the high tech efforts to safeguard the borders you might be surprised to learn old fashioned horse patrols are still quite effective. The mounted border patrol agents are beginning to ride mustangs on the Northern and Southern borders of the United States.

Mustangs are inherently strong and excel in endurance. They also have very few problems with their hooves and legs. Mustangs are basically the breed of “survival of the fittest”; Mother Nature at its best. It turns out this American breed brings special skills to the job, said the Border Patrol.

This “symbol” of the Old West is a modern day member of the Border Patrol’s mounted force. This breed is especially well adapted for the work they are required to do.

“All of our mustangs can move up a trail at a good pace. ATV’s can’t get up there. Trucks can’t get up there.” said Bobby Traweek, U.S. Border Patrol ranger. “They have a better immune system and better bone structure. They have larger hooves than your average domestic horse.” 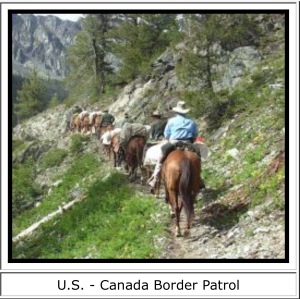 Mustangs run wild over the rugged terrain in ten western states. The Bureau of Land Management (BLM) is the government agency that is responsible for controlling the wild populations by gathering them from the public rangelands … and offering them to the general public to adopt. The BLM is mandated to ensure that no degradation of the range happens” [Except mining companies are allowed to degrade the range]. “They also have to monitor forage and water availability for the mustangs, wildlife and other users of the public ranges.

“We’re lucky to have these two mustangs. It’s two more that have found good homes and excel at their work,” said Traweek.

There are only a few mustangs working along the U.S. -Mexico Border Patrol, but the agency is hopeful it will be able to add more wild horses as it beefs up their mounted patrol units. Their wild past makes mustangs especially vigilant.

“They’ll perk up their ears or they’ll stop and alert the ranger when there are problems. It makes it a lot easier for us, said Jesus Arevalo, U.S. Border Patrol. “They may have a mountain lion chase them or a bear chase them, but due to their survival extinct, the mustang knows exactly how to respond.”

The wild horses can sense a smuggler hiding in the brush or a person called a “border bandit”.

In addition to all the other positives, the mustangs cost about half of what the Border Patrol is used to paying for horses that patrol the border.” [Why is the US Border Patrol paying the Bureau of Land Management for the horses? And, how much are they paying? The Wild Horse (Mustangs) are sold to the general public for a pittance.]

“At present, the Southern Border Patrol has four mustangs working on the U.S. – Mexico border in the El Paso and Del Rio area. Seventeen additional mustangs have been adopted to assist patrolling the Northern border of Canada. All of the mustangs were trained by inmates and staff at the Colorado Wild Horse Inmate Program.” http://www.blm. gov/wo/st/en/prog/wild_horse_and_burro/wh_b_information_center/news/success_stories/mustangs_help_patrol.print.html

Maybe the horses helped the US border guards to spot the Energy Fuels uranium mine fire in Texas: 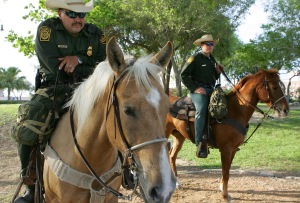 They need to be guarding the northern border to keep those nasty uranium miners like Energy Fuels, Cameco, and Uranium One (owned by Russia), as well as other mining companies out.

All photos are from the BLM, with the exception of the last one which is by the US Border Control.