This is what the National Guard is for – to help out during natural diasters, as well as protecting the homeland. It is not for helping out during nuclear emergencies, as seems to be the backup plan for the nuclear industry, nor for foreign wars https://miningawareness.wordpress.com/2016/01/03/nuclear-strategic-alliance-for-flex-emergency-response-safer-not-depends-on-emergency-resources-which-may-be-needed-elsewhere-unavailable/
“National Guard rescues 19,000 in flood-affected areas
By Louisiana National Guard Public Affairs Office August 18, 2016

A Louisiana National Guardsman guiding a Humvee through floodwaters off of I-12 outside of Denham Springs. (Photo Credit: Spc. Garrett L. Dipuma, Army National Guard ) 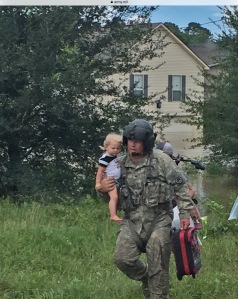 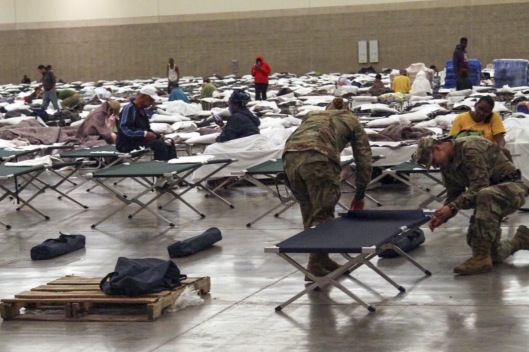 The Louisiana National Guard is assisting and conducting evacuations, security patrols, and engineering missions. Guardsmen have provided shelter support to people affected by the flooding with more than 2,200 cots and 1,700 blankets.

“With the changing conditions, we are continuously adapting to the needs on the ground,” said Maj. Gen. Glenn H. Curtis, adjutant general of the Louisiana National Guard.

“We continue to work closely with our state partner agencies making the most of opportunities to leverage resources and manpower to keep Louisiana citizens safe and maintain order.”

Over the course of these operations, Louisiana Guardsmen have supported local, state, and federal agencies with more than 230 high-water vehicles, 50 boats, 11 Bridge Erection Boats, and nine helicopters.

Louisiana’s Guardsmen are trained, ready and equipped to stand up at any moment to protect lives and property, maintain communications, and ensure the continuity of operations and government.”
https://www.army.mil/article/173589/national_guard_rescues_19000_in_flood_affected_areas