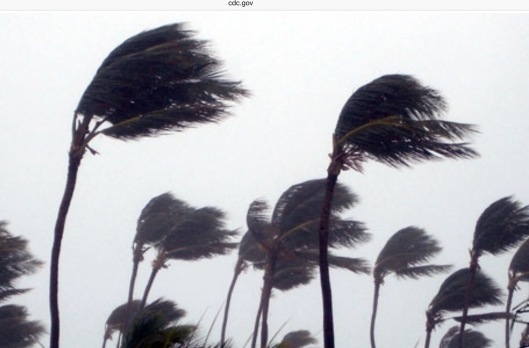 High winds radiate out from the center and gale force winds arrive ahead of the hurricane force winds. 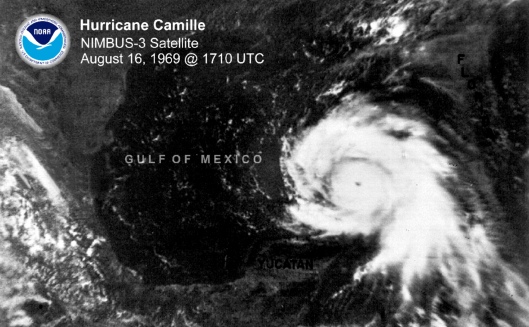 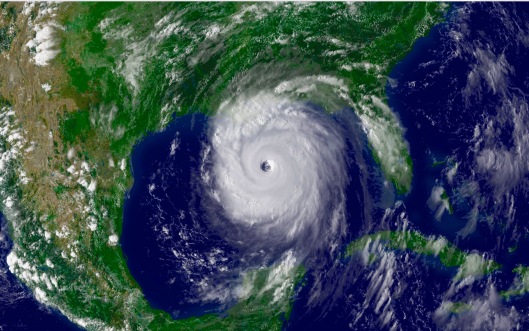 Excerpts from “Taming hurricanes with arrays of offshore wind turbines”
Mark Z. Jacobson1*, Cristina L. Archer2 and Willett Kempton3, Nature Climate Change, Vol. 4, March 2014, funded by the NSF and NASA:
“Hurricanes are causing increasing damage to many coastal regions worldwide1,2. Offshore wind turbines can provide substantial clean electricity year-round,… ”
“This study quantitatively tests whether large arrays of wind turbines installed offshore in front of major cities and along key coastal areas can extract sufficient kinetic energy from hurricane winds to reduce wind speed and storm surge, thus preventing damage to coastal structures as well as to the offshore turbines themselves. Unlike sea walls, offshore wind turbines would reduce both wind speed and storm surge and would generate electricity year-round…”
“This study…finds that large turbine arrays (300+ GW installed capacity) may diminish peak near-surface hurricane wind speeds by 25–41 m s −1 (56–92 mph) and storm surge by 6–79%. Benefits occur whether turbine arrays are placed immediately upstream of a city or along an expanse of coastline. The reduction in wind speed due to large arrays increases the probability of survival of even present turbine designs. The net cost of turbine arrays (capital plus operation cost less cost reduction from electricity generation and from health, climate, and hurricane damage avoidance) is estimated to be less than today’s fossil fuel electricity generation net cost in these regions and less than the net cost of sea walls used solely to avoid storm surge damage…” “As turbine arrays first experienced and dissipated slower winds near them, thereby weakening the overall hurricane by increasing central pressure, the turbines themselves prevented nearby winds from reaching their maximum certified wind speed of 50ms −1“… 1Department of Civil and Environmental Engineering, Stanford University, Stanford, California 94305-4020, USA, 2College of Earth, Ocean, and Environment, University of Delaware, Newark, Delaware 19716, USA, 3College of Earth, Ocean, and Environment, and Department of Electrical and Computer Engineering, University of Delaware, Newark, Delaware 19716, USA… “Funding sources include NSF, NASA and NASA high-end computing.” (Emphasis our own: https://web.archive.org/web/20160818071252/http://web.stanford.edu/group/efmh/jacobson/Articles/I/WindHurricane/HurricTurbPaperNatCC.pdf ) Strangely, NASA didn’t do a summary of this excellent research, which they helped to fund, or rather the US taxpayer funded via NASA and NSF.

Note that the strategy discussed in the article appears to have great potential for protecting New Orleans from a strong storm surge with strategic placement of wind farms.

A “hurricane’s destructive winds and rains cover a wide swath. Hurricane-force winds can extend outward more than 150 miles (242 km) for a large one. The area over which tropical storm-force winds occur is even greater, ranging as far out as almost 300 miles (483 km) from the eye of a large hurricane.” http://www.srh.noaa.gov/jetstream/tropics/tc_structure.html

The fact that the wind turbines increase the pressure is a good thing because it should mean the weakening of the storm: “Generally speaking, the intensity of a tropical cyclone is determined by either the storm’s maximum sustained winds or lowest barometric pressure… Costliest tropical cyclone: Hurricane Katrina – 2005 – $108 billion in damages.”
https://en.wikipedia.org/wiki/List_of_Atlantic_hurricane_records

“The 1935 Labor Day Hurricane is the strongest and most intense hurricane to make landfall in the United States and the Atlantic Basin in recorded history.[1]The second tropical cyclone, second hurricane, and second major hurricane of the 1935 Atlantic hurricane season, the Labor Day Hurricane was the first of three Category 5 hurricanes at landfall that the United States endured during the 20th Century (the other two being 1969’s Hurricane Camille and 1992’s Hurricane Andrew).” https://en.wikipedia.org/wiki/1935_Labor_Day_hurricane

“Hurricane Camille was the third and strongest tropical cyclone and second hurricane during the 1969 Atlantic hurricane season. It was the second of three catastrophic Category 5 hurricanes to make landfall in the United States during the 20th century (the others being 1935’s Labor Day hurricane and 1992’s Hurricane Andrew), which it did near the mouth of the Mississippi River on the night of August 17. Camille was the second strongest U.S. landfalling hurricane in recorded history in terms of atmospheric pressure, second only to the Labor Day Hurricane in 1935. The storm formed on 14 August and rapidly deepened. It scraped the western edge of Cuba at Category 2 intensity. Camille rapidly deepened once again over the Gulf of Mexico and made landfall with a pressure of 900 mbar (hPa; 26.58 inHg), estimated sustained winds of 175 mph (280 km/h)[2] and a peak official storm surge of 24 feet (7.3 m). The hurricane flattened nearly everything along the coast of the U.S. state of Mississippi, and caused additional flooding and deaths inland while crossing the Appalachian Mountains of Virginia. In total, Camille killed 259 people and caused $1.42 billion (1969 USD, $9.16 billion 2016 USD) in damages. To date, a complete understanding of the reasons for the system’s power, extremely rapid intensification over open water and strength at landfall has not been achieved.” https://en.wikipedia.org/wiki/Hurricane_Camille

“On the night of August 19–20, 1969, Nelson County was struck by disastrous flooding caused by Hurricane Camille. The hurricane hit the Gulf Coast two days earlier, weakened over land, and stalled on the eastern side of the Blue Ridge Mountains, dumping a world record quantity of 27 inches (690 mm) of rain, mainly in a three-hour period. Over five hours, it yielded more than 37 inches (940 mm), while the previous day had seen a deluge of 5 inches (130 mm) in half an hour, with the ground already saturated. There were reports of animals drowning in trees and people who had had to cup their hands around their mouth and nose to breathe.

Mudslide damage in Nelson County after the passage of Hurricane Camille
Flash floods and mudslides killed 153 people, 31 from Roseland, Tyro, and Massies Mill alone.[5] Over 133 public bridges were washed out in Nelson County, while some communities were under water.[6] In the tiny community of Davis Creek, 52 people were killed or could not be found; only 3 of 35 homes were left standing after the floodwaters receded.[5] The bodies of some people have never been found; others washed as much as 25 miles (40 km) downstream along the creeks and rivers. The entire county was virtually cut off, with many roads and virtually all bridges, telephone, radio/TV, and electric service interrupted.
The waters of the Tye, Piney, Buffalo, and Rockfish rivers flow into the James River. There was massive flooding elsewhere in Virginia, such as along the Maury River, which destroyed the town of Glasgow in Rockbridge County.
The James River and its tributaries normally drain Nelson County, but in the face of massive flooding from other tributaries such as Hatt Creek (along the James River some 80 miles (130 km) to the east) the James River crested more than 20 feet (6.1 m) above flood stage at Westham, as Nelson County citizens watched portions of houses and other buildings, bodies, and dead livestock flow past. Just a few miles further downstream, the James River crested at the City Locks in Richmond at 28.6 feet (8.7 m) swamping downtown areas and also flooding a substantial portion of South Richmond (formerly the separate city of Manchester.[7]). The Hurricane Camille disaster did over $140 million (in 1969 dollars) in damage across Virginia, however in no other place in Virginia was the storm as devastating and deadly as in Nelson County, where one percent of the population was killed and where many bodies were never recovered.” https://en.wikipedia.org/wiki/Nelson_County,_Virginia#Hurricane_Camille

“Hurricane Katrina was the eleventh named storm and fifth hurricane of the 2005 Atlantic hurricane season. It was the costliest natural disaster, as well as one of the five deadliest hurricanes, in the history of the United States. The storm is currently ranked as the third most intense United States landfalling tropical cyclone, behind only the 1935 Labor Day hurricane and Hurricane Camille in 1969. Overall, at least 1,245 people died in the hurricane and subsequent floods, making it the deadliest United States hurricane since the 1928 Okeechobee hurricane. Total property damage was estimated at $108 billion (2005 USD),[1] roughly four times the damage wrought by Hurricane Andrew in 1992.[3]” https://en.wikipedia.org/wiki/Hurricane_Katrina
http://www.srs.fs.usda.gov/newsroom/newsrelease/2007/nr_2007-04-20-hurricane.htm