Add your comment on the Environmental Protection Agency (EPA) Notice: [Nonprotective Inaction ] “Guide for Drinking Water after a Radiological Incident” here: https://www.regulations.gov/docket?D=EPA-HQ-OAR-2007-0268 by 11.59 pm on 25 July 2016. It’s quick, easy, and can be anonymous. If it’s too long, however, you will need to upload a pdf. But, it counts the words for you.

Like its 22 page companion, EPA Draft Protective Action Guide (PAG) for Drinking Water, the 8 page US EPA so-called “Drinking Water PAG – Cost Estimates” is staggeringly unprofessional. https://www.regulations.gov/document?D=EPA-HQ-OAR-2007-0268-0212 (Screenshots of the 8 pages are found at the bottom of this post, since it may not remain at the link after the comment deadline is over). 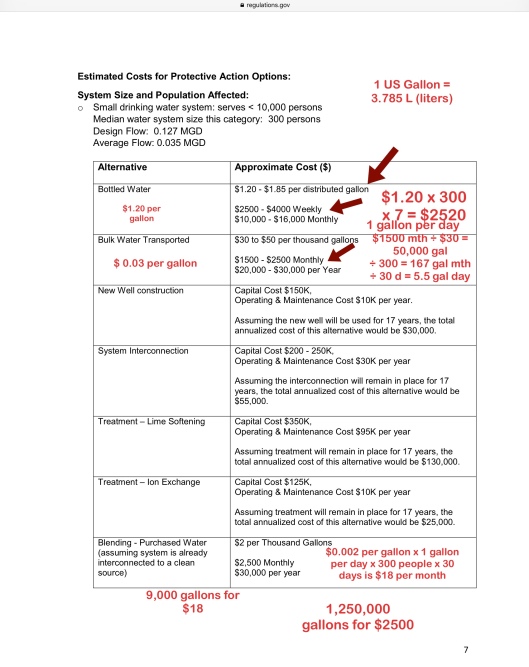 The EPA “Drinking Water PAG – Cost Estimates” does not seem based on the water quantity needed, but rather on being able to say that the cost would be less than $ 10 per month for each customer. Or, in the case of bottled water, less than $10 per week. Apparently someone either decided that customers or local governments would accept this, or that it would sound reasonable to most. However, the Flint Water Crisis reportedly could have been avoided for less than 37 cents per person per year – $100 per day for a population of 99,763.

Nowhere in any of these documents is an explanation of why the costs of either decontaminating radioactive water or drinking contaminated radioactive water should be born by the local water provider-consumers and ultimately by insurance companies-government taxpayers, rather than the nuclear utility-corporations, who would have caused the nuclear accident, directly or indirectly. Nowhere is there an explanation of why the impacted population should risk dying of life-shortening cancers so that the nuclear utilities-industry can make a bigger profit.

Even the IMF considers medical costs from pollution an unfair subsidy to the energy sector, which should be factored in, and they have pointed this out repeatedly. http://www.imf.org/external/pubs/ft/survey/so/2015/NEW070215A.htm

The EPA’s silly, vacuous, document is supposed “To help illustrate how to evaluate the cost-effectiveness, applicability and feasibility of protective actions to localities affected by a radiological contamination event EPA has provided information to guide the selection of options for providing alternate sources of drinking water.” (p. 3)

For the PAG they should have started with the amount of radiation exposure acceptable and worked backwards to what amounts of all radionuclides this corresponds to (not just one). For this so-called cost document, they should have started with water needs, acceptable risk, and worked forward to cost. And, the costs should include long-term economic and social costs for the excess cancers and other health problems caused by additional radiation in drinking water.

Compare the water expenditures proposed by the US EPA to the US government employee per diem (daily allowance) for food and water of $69 for the DC area (and in many places $74). At $1.20 per gallon, this $69 would provide almost 58 people with radiation free bottled water. Room allowance would be around $200 per day for DC. One day of hotel room and per diem would purchase a major filtration device for a family – http://bigberkey.naturalnews.com/bigberkey.html – which doesn’t filter everything 100% but would be a help. Tritium is more difficult and costly to filter, for instance. So, no one should wonder if the US EPA along with other bloated government agencies, which please no-one, gets shut down soon. Unfortunately, because of the debt, it appears unlikely that there would be a tax cut allowing purchase and filter upkeep of a private filtration system. And, wildlife don’t have access to filtered water.

How much did the EPA’s Gina McCarthy, DOE’s Moniz and their entourage pay for their recent Vienna Austria hotels, per diem and airfare? While we can’t find the international allowance, nor the hotel in which they stayed, nor the numbers who went, the rooms where Moniz negotiated a deal with his Iranian colleague last year (Beau Rivage Palace Hotel Lausanne) run around $500 per day, maybe more. Then there is the food stipend and the airfare.

Compare to the $1.9 billion, for 2016 only, which has been requested for so-called nuclear nonproliferation activities where the US runs all over the world taking HEU and plutonium waste to supposedly reduce global stocks of weapons-useable nuclear materials, some of which ends up in the Nolichucky River, which goes to the Tennessee and part goes to the Ohio R., the Mississippi R. and out to the Gulf of Mexico below New Orleans and part splits off to the Tennessee Tom Bigbee waterway and also ends up in the Gulf of Mexico. http://web.archive.org/web/20160128181743/http://energy.gov/articles/energy-department-presents-fy16-budget-request Almost $2 billion per year has been spent on import of foreign nuclear waste in the name of non-proliferations for many years – probably at least since 2009. This includes 100% foreign made radioactive materials such as Switzerland’s plutonium stockpile.

At least the US EPA didn’t even bother to insult people by putting a value on their lives and then manipulating it, to boot, for this PAG. It also saved us from slogging through more pages of BS. However, there still needs to be some evaluation of the long-term social and economic costs of allowing the public to drink radioactive water.

According to the US government funded, BEIR VII report, when a population of 100,000 is exposed to 100 mSv, an estimated additional 1% will get cancer due to the 100 mSv. Approximately half will die of these life-shortening cancers. A recent government funded study of nuclear workers suggests an estimate of 15% or greater excess cancer risk due to 100 mSv of exposure. This is considered the case even where the 100 mSv occurs over a lifetime. There is no safe dose of ionizing radiation. These are unacceptable and unnecessary risks. See: https://miningawareness.wordpress.com/2015/12/19/another-look-at-the-recent-low-dose-radiation-exposure-study-inworks/

According to BEIR VII, for those who die of radiation induced cancers, the life-shortening effects are on the order of 14 to 15 years. Currently the average monthly cost of new cancer medications, according to Memorial Sloane-Kettering, is around $10,000 per month (median), which is $120,000 per year, and thus $1.8 million for 15 years, if the prices don’t rise, but the prices have been rising and rapidly so. This is cost of medication alone, and excludes the cost of doctors, hospitals, and social or financial cost of caregivers for the ill, and lost of “free” caregivers for children and the elderly, by loss of those who are middle aged, through illness and/or death. In short, it excludes value of work done, whether paid or unpaid. Women are disproportionately impacted by radiation induced cancers, as well, and women as a whole do much of the unpaid work, which allows continuing functioning of a household, and without which there may be need for hiring a maid. Already the high cancer drug prices are being decried, even by some with ties to big pharma, it’s so bad. Life-boat ethics is kicking in. For instance, some cancer drugs are unavailable in the UK Public Health System due to high price and cost-cutting (even while they, like the US, find money to subsidize the mostly foreign nuclear industry). Even where people have private insurance, there are limitations in coverage; bankruptcy may have to be declared, and the taxpayer most likely picks up cost (or the person doesn’t get the needed care). Even the IMF considers medical costs from pollution an unfair subsidy to the energy sector, which should be factored in, and they have pointed this out repeatedly. http://www.imf.org/external/pubs/ft/survey/so/2015/NEW070215A.htm See: https://miningawareness.wordpress.com/2015/10/30/usnrc-value-of-death-update-all-tricks-no-value-of-life-no-medical-care-or-caregiver-costs/
https://miningawareness.wordpress.com/2015/11/03/usnrc-value-of-life-and-evacuation-policies-discriminate-against-older-people-and-the-disabled-crimes-against-humanity-in-the-making-comment-deadline-tonight-3-november-11-59-pm-et-ny-dc/

Regarding the EPA’s Gina McCarthy, DOE’s Ernest Moniz and other’s recent trip to Vienna: In stark contrast to aerosol sprays, air conditioning systems are closed systems. If the units are run off of renewable energy then they are not contributing to global warming. Less air conditioning means a need for more water to drink. While it may not be the case for Gina and Moniz’ homes in the Boston area, in much of the US it can be dangerously hot. Heat can be especially life-threatening for the elderly. And, it means that there will have to be more frequent transport of food goods if they cannot be properly cooled, which will contribute to air pollution-global warming. Furthermore, air conditioning is almost non-existent in Europe and they don’t even refrigerate eggs – but at least some are guilty of overheating. There should be no overheating and no overcooling. We suggest that Europe stop burning trees, especially trees from America’s southern states, and then Americans can use those trees as shade to help cool their homes or go sit under a shade tree. Forests are cooler in the summer and warmer in the winter. Even if this agreement were a worthwhile idea, there is no reason that a bunch of people needed to fly to Vienna to discuss it, other than they wanted to go on a free vacation – free for them, but taxpayer pays. They could do a video conference.

Regarding Flint, Professor “Edwards said: “It was the injustice of it all and that the very agencies that are paid to protect these residents from lead in water, knew or should’ve known after June at the very very latest of this year, that federal law was not being followed in Flint, and that these children and residents were not being protected. And the extent to which they went to cover this up exposes a new level of arrogance and uncaring that I have never encountered.” https://en.wikipedia.org/wiki/Flint_water_crisis

“Researchers at Virginia Tech have said that the problem—caused when Flint moved its water supply from the Detroit system to the Flint River without the proper corrosive controls—could have been fixed with as little as $100 a day.” http://www.commondreams.org/news/2016/01/08/important-reminder-flint-crisis-people-still-have-no-safe-water But, how much radiation is in the Lake Huron water? Probably better to treat the Flint water with the proper chemicals.

Gina McCarthy bears a striking resemblance to Marie Antoinette. And, no we didn’t manipulate the picture other than trying to stick them both together we might have accidentally made Gina’s face more thin.

In a Reuters picture of Moniz on the balcony of the Beau Rivage Palace Hotel, he looked like he thought he was Louis the XIV. However, it seems more appropriate to dress him as Louis XVI.

Head of Moniz from a WhiteHouse gov video and body of Louis XVI from a painting.

Emphasis our own. We remain skeptical that the water utility will be notified soon enough to close the intakes. Even if the nuclear utility knows ahead of time, they may be unwilling or unable to notify the water utility in a timely fashion. Also, reservoirs will not necessary be covered. 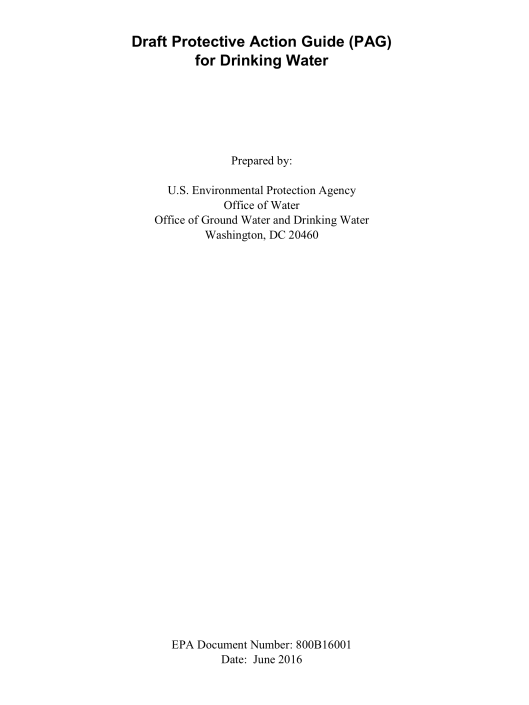 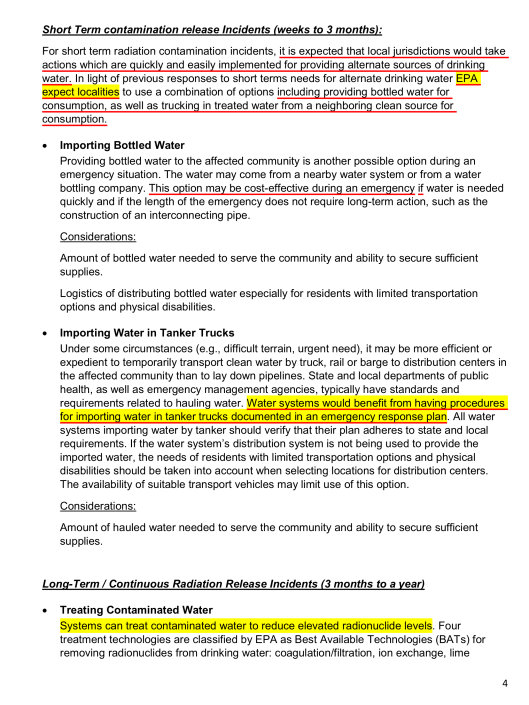 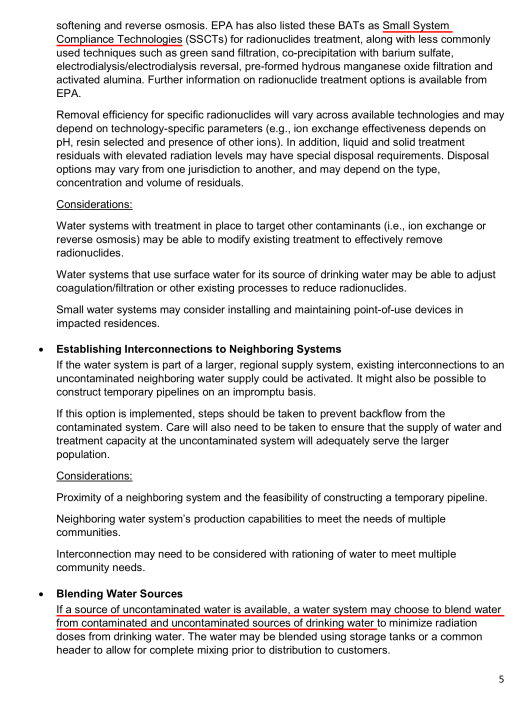 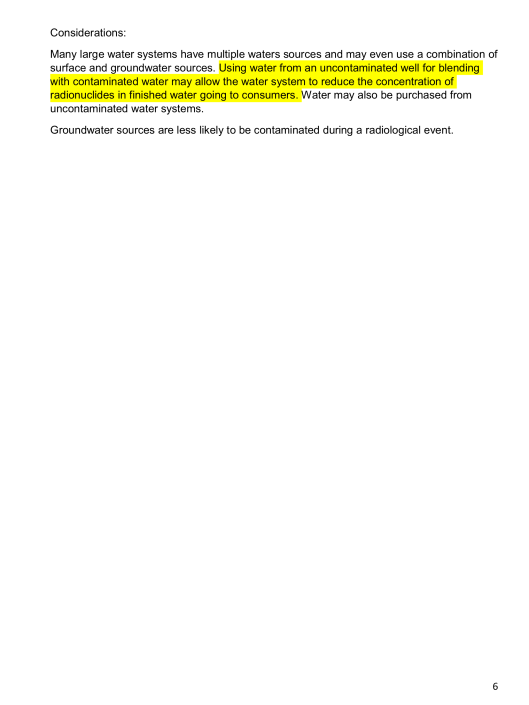