“Proclaim LIBERTY Throughout all the Land unto all the Inhabitants Thereof
Lev. XXV. v X.” 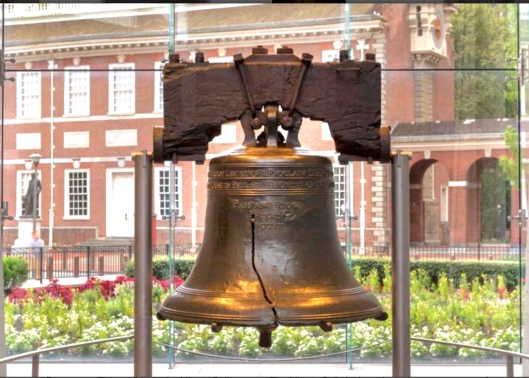 “The Museum found a considerably higher level of tin in the Liberty Bell than in other Whitechapel bells of that era, and suggested that Whitechapel made an error in the alloy, perhaps by using scraps with a high level of tin to begin the melt instead of the usual pure copper.” (Wikipedia-Hanson et. al. 1975) 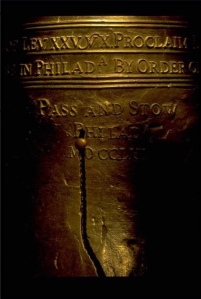 What if this defective bell or the defective rail cars had been nuclear reactor parts or spent nuclear fuel casks? There are a frightening number of these defects-recalls reported for nuclear parts, large and small. And, how many go unreported? We just found this defects page: http://www.nrc.gov/reading-rm/doc-collections/event-status/part21/ to go with this: http://www.nrc.gov/reading-rm/doc-collections/event-status/event/

According to Wikipedia, “The Whitechapel Foundry, still in business today, takes the position that the bell was either damaged in transit or was broken by an inexperienced bell ringer, who incautiously sent the clapper flying against the rim, rather than the body of the bell.[12]” https://en.wikipedia.org/wiki/Liberty_Bell How would they know? They weren’t there! Records? And, what if their record-keeping was inaccurate or incomplete as appears to be a major concern for large nuclear components (and probably small) made at Areva-Le Creusot (Schneider) Forge in France over the last 50 years?

But, then again: “SAVANNAH 1/31/13: Days after Georgia Power circulated a news story bragging about the arrival of the 300-ton Korean-made reactor pressure vessel for Vogtle, an anonymous source leaked the news that Georgia Power had almost rolled the massive reactor pressure vessel into an alligator swamp en route from the Port of Savannah to the Vogtle construction site near Augusta, Georgia. The reactor vessel platform misaligned with the lauded Schnaebel rail car 1/4 mile from the Port of Savannah and the load has languished in the port railyard ever since.” http://www.nonukesyall.org/Vogtle.html So, if this Vogtle nuclear power station is ever finished and goes online and the nuclear reactor pressure vessel cracks later-defects are found, who will get blamed? Currently, the Swiss regulator, ENSI, seems to be blaming Areva-Le Creusot Forge (formerly Schneider) for the almost 1000 defects in Beznau I nuclear reactor pressure vessel, rather than old age. If a bell made of the wrong alloy mix can crack so quickly, what of old (and new) nuclear reactor pressure vessels and other large parts made of the wrong alloy or otherwise incorrectly made? Prairie Island Nuclear Power Station in Minnesota appears to be of the same make-generation as Beznau.

So, whose fault was it that it cracked? The bell-ringer? The forge? Transportation? 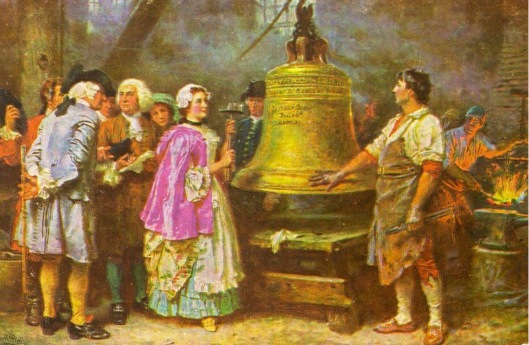 Painting by Jean Leon Gerome Ferris
Wikipedia continues: “In 1975, the Winterthur Museum conducted an analysis of the metal in the bell, and concluded that “a series of errors made in the construction, reconstruction, and second reconstruction of the Bell resulted in a brittle bell that barely missed being broken up for scrap”.[13] The Museum found a considerably higher level of tin in the Liberty Bell than in other Whitechapel bells of that era, and suggested that Whitechapel made an error in the alloy, perhaps by using scraps with a high level of tin to begin the melt instead of the usual pure copper.[14] The analysis found that, on the second recasting, instead of adding pure tin to the bell metal, Pass and Stow added cheap pewter with a high lead content, and incompletely mixed the new metal into the mold.[15] The result was “an extremely brittle alloy which not only caused the Bell to fail in service…”[16]” https://en.wikipedia.org/wiki/Liberty_Bell The National Park Service says that after it was recast in 1753 that it cracked in 1846, probably due to over 90 years of almost continual use: https://www.nps.gov/inde/planyourvisit/upload/english.pdf “The famous crack in the Liberty Bell is really a repair job. In 1846, workmen widened a thin crack using a repair called “stop drilling”. Look for more than 40 drill bit marks in the repair. The repair job failed when a second crack developed on February 23, 1846.” https://www.nps.gov/media/photo/gallery.htm?id=3349E378-155D-451F-6711E380C4C4C431

In time for the 240th Anniversary of the US Declaration of Independence: “SEPTA Unveils 5th Street/Independence Hall Station
Transit Gateway to America’s Most Historic Square Mile Gets a New Name
June 30, 2016 Just in time for July Fourth, SEPTA has renamed the station at the doorstep of Independence National Historical Park and neighboring cultural and historical attractions.” Read more here: http://www.septa.org/media/releases/2016/06-30-16b.html https://en.wikipedia.org/wiki/United_States_Declaration_of_Independence

But then a few days later:
Fortunately, maintenance workers were doing their job and noticed the problem before there was an accident. If not, many could have died since some employees at Hyundai Rotem appear to have not been doing their jobs properly.

“SEPTA Announces Regional Rail Service Adjustments
Silverliner V Rail Cars Out of Service for Repair of Structural Defect July 03, 2016
PHILADELPHIA, PA (July 3, 2016) – SEPTA has identified a defect with its Silverliner V Regional Rail cars that has resulted in these trains being taken out of service for the immediate future. This will impact customers starting Tuesday, July 5, as SEPTA’s passenger capacity for weekday travel will be reduced.

All 120 Silverliner Vs, which SEPTA received between 2010 and 2013 and comprise approximately one- third of the Regional Rail fleet, are out of service. There will be no service impact today or on Monday, July 4th, as weekend/holiday schedules are already in place, and can be maintained utilizing the rest of the Regional Rail fleet.
[…]
The Silverliner V structural defect was discovered early Friday morning by SEPTA railroad vehicle maintenance personnel. Follow-up inspections with the fleet showed that there was a problem with cracking in the main suspension systems. Within 24 hours, all Silverliner Vs had been taken out of service.

SEPTA will work with Hyundai Rotem, the rail car manufacturer, to resolve the problems. The suspension systems are still under warranty, and Hyundai Rotem is working cooperatively with SEPTA to locate and expedite the procurement of materials to repair or replace the failed suspension components.”
http://www.septa.org/media/releases/2016/7-3-16.html (Emphasis our own. Rotem sounds enough like Rot’em or rotten to be a hint…)

See what SEPTA did? Within 24 hours they had all of the rail cars out of service! Bravo!

But, when the US Nuclear Regulatory Commission and nuclear utilities find defects they allow months and even years if they require repairs at all!

Besides better ethics, SEPTA knows that it will be held legally and financially liable, whereas the nuclear utilities will not pay much, if at all, in the event of an accident due to the Price Anderson Act.

According to Wikipedia: “The Silverliner V is an electric railcar designed and built by Hyundai Rotem for the SEPTA Regional Rail system and is now being offered to other commuter rail providers with Denver’s RTD being the second purchaser… SEPTA had ordered a total of 120 of the cars at a cost of $274 million;[5] the first cars arrived in the United States on 28 February 2010 from South Korea, where they were manufactured by Hyundai Rotem.[5][6] The cars are built in South Korea and final assembly takes place in South Philadelphia.[5] The cars entered revenue service on 29 October 2010 and all 120 were to be completed by the end of 2011.[7] However, due to delays that were reportedly to last until mid-2012, SEPTA is owed millions in fines for the overdue equipment.[8] The last of the 120 cars arrived on property for testing in February, 2013.
Cars 735, 736, 871 and 872 are owned by Delaware for use on the Wilmington/Newark Line. Cars 821, 822 are reserved for use on the Warminster line.
On July 2, 2016, SEPTA removed all of the “Silverliner V” cars from service due to a “serious structural defect.”[9]” https://en.wikipedia.org/wiki/Silverliner_V

According to Wikipedia: “Charles duly ordered the bell from Thomas Lester of the London bellfounding firm of Lester and Pack (today the Whitechapel Bell Foundry)[3] for the sum of £150 13s 8d,[4] (equivalent to £21,351.87 today)[5] including freight to Philadelphia and insurance. It arrived in Philadelphia in August 1752. Norris wrote to Charles that the bell was in good order, but they had not yet sounded it, as they were building a clock for the State House’s tower.[6] The bell was mounted on a stand to test the sound, and at the first strike of the clapper, the bell’s rim cracked. The episode would be used to good account in later stories of the bell;[7] in 1893, former President Benjamin Harrison, speaking as the bell passed through Indianapolis, stated, “This old bell was made in England, but it had to be re-cast in America before it was attuned to proclaim the right of self-government and the equal rights of men.”[8] Philadelphia authorities tried to return it by ship, but the master of the vessel which had brought it was unable to take it on board.[9]

Two local founders, John Pass and John Stow, offered to recast the bell. Though they were inexperienced in bell casting, Pass had headed the Mount Holly Iron Foundry in neighboring New Jersey and came from Malta, which had a tradition of bell casting. Stow, on the other hand, was only four years out of his apprenticeship as a brass founder. At Stow’s foundry on Second Street, the bell was broken into small pieces, melted down, and cast into a new bell. The two founders decided that the metal was too brittle, and augmented the bell metal by about ten percent, using copper. The bell was ready in March 1753, and Norris reported that the lettering (which included the founders’ names and the year) was even clearer on the new bell than on the old.[10]
City officials scheduled a public celebration with free food and drink for the testing of the recast bell. When the bell was struck, it did not break, but the sound produced was described by one hearer as like two coal scuttles being banged together. Mocked by the crowd, Pass and Stow hastily took the bell away and again recast it. When the fruit of the two founders’ renewed efforts was brought forth in June 1753, the sound was deemed satisfactory, though Norris indicated that he did not personally like it. The bell was hung in the steeple of the State House the same month.[11] Read more here: https://en.wikipedia.org/wiki/Liberty_Bell

THEY NEED TO GO BACK TO MAKING BELLS INSTEAD OF NUCLEAR REACTOR PARTS IF THEY MUST KEEP FORGES IN BUSINESS.
BELLS CAN USE RECYCLED METAL; THE NUCLEAR INDUSTRY CANNOT OR THE METAL WON’T BE STRONG ENOUGH. A CRACKED BELL IS NO BIG DEAL. A CRACKED NUCLEAR PRESSURE VESSEL CAN MAKE HUGE AREAS UNINHABITABLE. CRACKED RAIL CARS ARE POTENTIALLY DEADLY ENOUGH.