We may never know his motive. But, he apparently wasn’t technically inclined enough to figure out how to remove the photos from his phone before disposal. And, yet, he was supposed to be operating and maintaining nuclear subs from September of 2007 to March of 2012.
“On January 19, 2009, at approximately 4:00 a.m., SAUCIER took two photos, one of the auxiliary steam plant panel and the other of the reactor compartment viewed through a portal.  On March 22, 2009, at approximately 1:30 a.m., SAUCIER took two photos that, when placed side by side, provided a panoramic array of the Maneuvering Compartment, the room from which the propulsion system of the boat is operated.  On July 15, 2009, at 12:47 p.m., SAUCIER took two photos documenting the reactor head configuration of the nuclear reactor and a view of the reactor compartment from within that compartment.” (USDOJ, 27 May 2016)

Was he taking the pictures because he was one of those who cheated on the nuclear navy exams and needed help figuring out what to do? Was he going to set up a business making Small Modular Reactors (SMR), so that he could run after some of that nuclear pork barrel government funding so prolifically doled out? Did he sell the pictures to someone else who wanted to set up such a company? Did he sell the pictures to other governments? To terrorists? Or, did he just want to take the pictures for the fun of it or as a sort of photo diary? If he was a whisteblower then he seems to have been effectively muzzled. If what we are being told is the true story and he wasn’t bright enough to delete the pictures from his phone, then he wasn’t bright enough to be running a nuclear sub. And, indeed, there are too many of these nuclear submariner veterans running around and the nuclear industry appears largely an expensive make-work program for these nuclear navy veterans, not only in the US, but apparently also in the UK. While some of these are just trying to earn a living, and perhaps even trying keep everyone safe by operating aging reactors as well as they can, there is a not so bright contingent who continue to push for more nuclear. They only have 15 months training, anyway! “These mechanics go through a rigorous training program consisting of three months at the Nuclear Field “A” School or in previous years Machinist’s Mate “A” School, six months of Naval Nuclear Power Training Command also known as Nuclear Power School, and six months at one of several Nuclear Power Training Units (prototypes).” https://en.wikipedia.org/wiki/Machinist%27s_mate That’s a mere 15 months.

Thirty-four years ago, the “Father of the Nuclear Navy”; of the world’s first commercial Pressurized Water Reactor (PWR), and thus a major father of Small Modular Reactors (SMR) and much of the commercial reactor industry testified before Congress. In his testimony, Admiral Rickover pointed to the importance of the nuclear navy to operating the nuclear industry, while objecting to both subsidizing the nuclear industry, and to the existence of nuclear power itself, because of the radioactive discharges and waste: “Admiral RICKOVER. Supervision, and I can give you a perfect example of that. Most of the civilian industry is manned by people who were trained in the naval program and yet they run into these problems. Senator PROXMIRE. Trained in the naval program? Admiral RICKOVER. Yes, sir. We have trained about 54,000 people. Many of them have gotten jobs in the civilian nuclear industry. The senior watchstander at Three Mile Island had been in a nuclear ship. But the difference is that in the Navy we truly supervise. We require proper watchstanding. We check on everything. I get reports all the time, every week, from every one of our ships. In the civilian nuclear industry, there are no similar reports to one central authority. There is no equivalent supervision. One of the serious things wrong at Three Mile Island was the lack of supervision and carelessness in operation…. Admiral RICKOVER. I do not believe the Government should spend money fostering nuclear power. Government should have people checking on their operation. I do not believe the Government should subsidize the development of commercial nuclear power. They have done enough now… every time you produce radiation, you produce something that has a certain half-life, which in some cases is billions of years… I do not believe that nuclear power is worth the present benefits since it creates radiation…”

On the Cheating Scandal, which went back to 2007 or Earlier 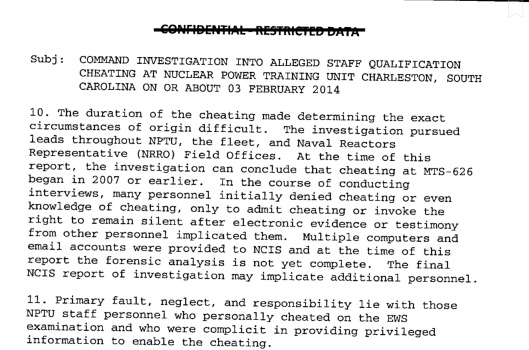 What was Kristian Saucier’s job? “According to the Bureau of Naval Personnel (BUPERS), the job of a Machinist’s Mate is to ‘operate, maintain, and repair (organizational and intermediate level) ship propulsion machinery, auxiliary equipment, and outside machinery, such as: steering engine, hoisting machinery, food preparation equipment, refrigeration and air conditioning equipment, windlasses, elevators, and laundry equipment. Operate and maintain (organizational and Intermediate level) marine boilers, pumps, forced draft blowers, and heat exchangers; perform tests, transfers, and inventory of lubricating oils, fuels, and water. Maintain records and reports, and may perform duties in the generation and stowage of industrial gases.’ Enlistees are taught the fundamentals of this rating through on-the-job training or formal Navy schooling. Advanced technical and operational training is available in this rating during later stages of career development.” https://en.wikipedia.org/wiki/Machinist%27s_mate

Is accelerated technical expertise a good idea for the nuclear navy?

This is from a 2007 recruitment document.

According to court documents and statements made in court, from September 2007 to March 2012, SAUCIER served as a machinist’s mate aboard the USS Alexandria, which is a U.S. Navy Los Angeles-class nuclear attack submarine based at the Naval Submarine Base New London in Groton, Conn.  On at least three separate dates in 2009, SAUCIER used the camera on his personal cellphone to take photographs of classified spaces, instruments and equipment of the USS Alexandria, documenting the major technical components of the submarine’s propulsion system.

SAUCIER had a Secret clearance and knew that the photos depicted classified material and that he was not authorized to take them.  He retained these photographs and failed to deliver them to any officer or employee of the U.S. entitled to receive it.

The investigation began in March 2012 when SAUCIER’s cellphone was found at a waste transfer station in Hampton, Conn.  SAUCIER was interviewed by the Federal Bureau of Investigation and Naval Criminal Investigative Service in July 2012 and confronted with the classified images from his phone.  Following that interview and in an effort to impede the federal investigation, SAUCIER returned to his home and immediately destroyed a laptop computer, a personal camera and the camera’s memory card.  Pieces of a laptop computer were subsequently found in the woods on a property in Connecticut owned by a member of SAUCIER’s family.

SAUCIER was arrested on a criminal complaint on May 28, 2015 and was subsequently indicted.

SAUCIER is currently enlisted in the U.S. Navy as a Petty Officer First Class assigned to the Naval Support Activity Base, Saratoga Springs, N.Y.  He is awaiting an administrative separation board proceeding.

This matter has been investigated by the Federal Bureau of Investigation and the Naval Criminal Investigative Service.  The case is being prosecuted by Assistant U.S. Attorneys Vanessa Richards and Jacabed Rodriguez-Coss, and Trial Attorney Will Mackie from the Justice Department’s National Security Division, with the assistance of the U.S. Attorney’s Office for the Northern District of New York.
USAO – Connecticut
Updated May 27, 2016” https://www.justice.gov/usao-ct/pr/us-servicemember-admits-illegally-retaining-photos-taken-inside-nuclear-sub-impeding