70% of Chernobyl fallout poured down upon neighboring Belarus. 30 years later the government is failing to care for the victims, all while investing billions in nuclear energy. Russia is selling a new nuclear power station to Belarus for an estimated $5 billion. (Read more below Greenpeace article & here: https://miningawareness.wordpress.com/2016/04/26/governments-cut-services-to-chernobyl-survivors-while-spending-billions-on-nuclear-power-stations )

Meanwhile, Greenpeace has given help to Nadesha Rehabilitation Centre in Belarus, described in the article below. 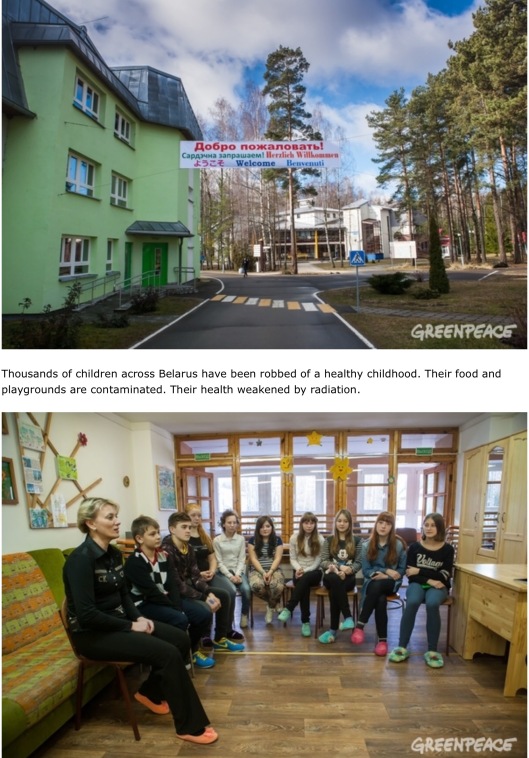 “Chernobyl’s children of hope
Blogpost by Andrey Allakhverdov – 25 April, 2016 at 11:49
The word “nadeshda” means hope in Russian. The Nadesha rehabilitation centre was founded to give hope to children living in towns and villages contaminated by the Chernobyl disaster.   Thousands of children across Belarus have been robbed of a healthy childhood. Their food and playgrounds are contaminated. Their health weakened by radiation.

At Nadeshda I meet Elena Solovyeva, a teacher from the heavily contaminated Mogilev region, who has brought her class to the centre. She tells me that around 40% of her students have health problems: asthma, diabetes and cancer or weak immune, respiratory and digestive systems.

“We explain to the kids where their problems come from. They get it. We breathe contaminated air, we eat contaminated food… You never get used to it, but it is almost impossible to get away from,” she says.  Nadeshda was founded not only to help care for the health of the children, and now grandchildren, of Chernobyl, but also to teach them how to live in a contaminated environment.

Olga Sokolova, a doctor at Nadeshda, tells me: “We explain to them what they should do and what they shouldn’t. What to eat and what not to eat, where to go and where not to go, how to take care of themselves.”

I’m saddened talking to Olga. A great injustice has been done to the children who come here. Before they were even born, Chernobyl stole their ability to grow and to play without inhibition. It is now left to the children to protect themselves from radiation.

“Our aim is to help children to understand their responsibility for their own health,” Nadeshda’s director Vyacheslav Makushinsky tells me.

It’s unfair, but it’s the reality for millions of Chernobyl survivors. Teaching responsibility and living by example – those are the basic principles of Nadeshda. While governments and the nuclear industry walk away from their responsibilities, survivors come together at places like Nadeshda.

What’s beautiful about the centre is that people are not only coming together to support each other, they’ve also taken it on themselves to show the world that there is no need for nuclear power.

As the Belarus government builds a new nuclear reactor just 80 kilometers away from here, Nadeshda is retrofitting its buildings so that it can be powered by 100% renewable energy.

Nadeshda has the most powerful solar heating system in Belarus, and all its buildings and electrical devices are energy efficient.

The centre is now installing new solar photovoltaic systems on a nearby field to cover all their energy needs.

“We’re showing how even a big institution like ours can operate without harming nature,” Makushinsky says.

The director is enthusiastic: it will be the first project in Belarus of such a scale financed solely from donations. I’m proud that a Greenpeace-run foundation is part of it by donating 15,000 euros to help make it happen.

Makushinsky tells me why it’s so important for the centre to go renewable: “The kids must learn to live in such a way that they preserve their health and make sure that a catastrophe like Chernobyl doesn’t happen again.”

Speaking to Makushinsky I realise how hope inspires action. The suffering caused by Chernobyl shows why we need to get rid of nuclear power for good. The persistence of Makushinsky and others at the Nadeshda centre shows that another way is possible, if we only try.

Nearby, a group of children are drawing pictures of the Chernobyl disaster and their dreams of non-nuclear future. Above them hangs a banner saying “We are the earth’s hope.” Indeed they are. And they should inspire all of us to support them and to speak up for a renewable future where disasters like Chernobyl or Fukushima would be a long forgotten nightmare“. https://www.thunderclap.it/projects/39994-chernobyl-30-year-anniversary?utm_source=other&utm_medium=post&utm_term=Chernobyl,thunderclap&utm_campaign=Climate&__surl__=IgN6C&__ots__=1461635264806&__step__=1

http://www.greenpeace.org/international/en/news/Blogs/nuclear-reaction/nadeshda-chernobyl-children-hope-renewable-energy/blog/56263/ (Emphasis our own). Many more pictures and more at the original link.

Sign a letter to the Presidents of Russia, Belarus, and the Ukraine here, protesting cuts to services for Chernobyl victims as billions are spent on nuclear: https://act.greenpeace.org/ea-action/action?ea.client.id=1844&ea.campaign.id=49719

“Few people know that 70% of the radioactive fallout of the 1986 explosion landed on the territory of Belarus,” http://www.theguardian.com/commentisfree/2016/apr/16/chernobyl-30-years-nuclear-soviet-union

Russian State owned (Rosatom subsidiary) Atomstroyexport is building the nuclear power station in Belarus. Atomstroyexport will supply the III generation VVER-1200 type reactors (“AES-2006” project). The nuclear power station “is expected to cost up to US$5 billion. In addition, there are investments to upgrade the national power grid for power transmission from the nuclear power plant, and the construction of an urban settlement for the power plant’s workers.” https://en.wikipedia.org/wiki/Belarusian_nuclear_power_plant

“Rosatom has a unique legal status within the Russian government, which provides it certain special protections. Outside of the strategic direction of the Russian government and President, Rosatom has an unusually high degree of autonomy. Russian federal authorities, authorities of the constituent entities of the Russian Federation or local authorities have no right to interfere with Rosatom’s activities, except in special cases, are defined in law… Rosatom is also excluded from obligations to make public its activities, expenditures or use of property. The Director General also has the right to classify information as state secrets, as provided by Russian Federal Law.” (Emphasis added) Read especially pages 12 and 15 in Greenpeace’s “Rosatom RISKS Exposing the troubled history of Russia’s state nuclear corporation” Greenpeace.org: http://www.greenpeace.org/hungary/PageFiles/636986/rosatom_risks.pdf