As a point of comparison, the 103 Bq/kg Cs 137 found in grass is 1/12th the amount of Cs 137 allowed in US food; 1/6th the 600 Bq/kg allowed in German-European food, and 1/10th the amount allowed within the UK itself, Canada, Australia, New Zealand. It is barely above the total radiation (100 Bq/kg) allowed in food in Japan. This does not make it safe. The US National Academy of Sciences BEIR report continues to state that there is no safe dose of ionizing radiation. Increased dose is increased risk. Even one track (shot) of ionizing radiation can lead to a mutation, which if improperly repaired could lead to cancer or other disease, including heritable ones. 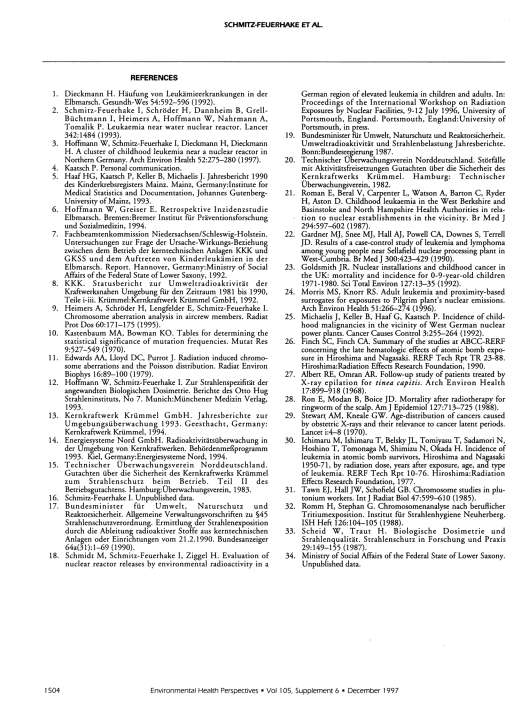 “Leukemia in the Proximity of a German Boiling-water Nuclear Reactor: Evidence of Population Exposure by Chromosome Studies and Environmental Radioactivity, by Inge Schmitz-Feuerhake, et. al. Environmental Health Perspectives – Vol 105, Supplement 6 * December 1997 Original Found here: http://www.ncbi.nlm.nih.gov/pubmed/9467072
It looks like the German government should be suing Swedish Govt. owned Vattenfall and German E.On. who are owners of this nuclear power station, and not vice versa. https://miningawareness.wordpress.com/2016/04/14/swedish-government-nuclear-shakedown-of-germany-dumping-swedish-nuclear-waste-on-the-usa-2/ If not the German people should sue for it’s their environment and taxes at stake. All of these companies reaped benefits from Nazi Germany (see bottom of this blog post) and apparently were never held adequately accountable.

“The Elbmarsch leukemia cluster: are there conceptual limitations in controlling immission from nuclear establishments in Germany?, by Schmitz-Feuerhake I, Dieckmann H, Hoffmann W, Lengfelder E, Pflugbeil S, Stevenson AF. Arch Environ Contam Toxicol. 2005 Nov;49(4):589-600. Epub 2005 Jul 27.
Abstract
The childhood leukemia cluster in the proximity of the German nuclear establishments of Geesthacht is unique in its spatial and temporal concentration. After a steep increase in cases in 1990, the cluster continues to show a significant increase up to the present. Early investigations of blood samples from a casual sample of local residents showed an increase in dicentric chromosomes in lymphocytes, indicating exposure exceeding dose limits. Analyses of the immission data revealed several unexpected deliveries of fission and activation products in the environment but provided no explanation of the source. Because of the observed overdispersion of dicentric chromosomes in cells, the idea of a contribution by densely ionizing emitters was compelling. The routine programs, however, do not include alpha emitters. These were measured in specific studies that proved contamination by transuranic nuclides. As shown in the present investigation, routine environmental surveillance programs support the occurrence of an accidental event near Geesthacht in September 1986. Until now, neither the cause nor the complete scenario of the activity release could be established. The ongoing discussion highlights limitations in the immission-control concept, which is predominantly based on gamma-radiation monitoring. PMID: 16075358 [PubMed – indexed for MEDLINE]” http://www.ncbi.nlm.nih.gov/pubmed/16075358 (Emphasis added).

“Transuranic isotopes and 90Sr in attic dust in the vicinity of two nuclear establishments in northern Germany.Health Phys. 2003 May;84(5):599-607. by Schmitz-Feuerhake I1, Mietelski JW, Gaca P. Attic dust was chosen as the test medium in order to search for traces of man-made bone seeking alpha and beta emitters. The samples were taken from 5 houses in the community of Elbmarsch situated at the river Elbe, adjacent to the Krümmel nuclear power plant and the nuclear research center of Geesthacht. Five houses in other regions of northern Germany were taken as a control. 238Pu, (239,240)Pu, 241Am, and 244Cm were measured by alpha spectrometry after chemical separation. Additionally, 241Pu was measured by liquid scintillation spectrometry, and the fission product 90Sr was measured in a separate investigation. All nuclides except 244Cm showed activities above the detection limit in the Elbmarsch samples and an elevated mean concentration compared to the control. It can be concluded from the activity ratio 241Am/(239,240)Pu that the Elbmarsch contamination cannot be accounted for by the background levels of transuranic nuclides resulting from weapons fallout. The derived release of alpha emitters is assumed to have contributed to the induction of a leukemia cluster in children, which was observed in Elbmarsch between 1990 and 1996.” http://www.ncbi.nlm.nih.gov/pubmed/12747479
(Emphasis added).

“Luossavaara-Kiirunavaara Aktiebolag (LKAB) is a Swedish mining company. The company mines iron ore at Kiruna and at Malmberget in northern Sweden.” https://en.wikipedia.org/wiki/LKAB In the run-up to and during WWII, LKAB iron mining company was apparently half Swedish government owned; Vattenfall hydroelectric apparently provided energy for rail transport and surely other aspects of iron mining. In “Post-industrial landscape scars” (2014, Palgrave Macmillan) Anna Storm points out that selling iron ore to Germany during World War II “brought substantial income to the state“. As we’ve recently discussed, E.On. long owned Degussa, which was involved in the Nazi nuclear industry and melting stolen gold. It may still have some indirect ownership of Degussa. Siemens also benefitted from Nazi policies. This is where much of the missing Nazi gold would be – the profits which these companies made during the war, including the Swedish State.

“Sweden supplied 40 percent of Germany’ s total iron supply in 1939 and 1940, but the proportion dropped off to 25 percent during the war years as Germany exploited resources in occupied Europe. Sweden exported 10 million tons of iron ore to Germany in 1939, and in 1943 exports still totaled 9.5 million tons. British experts during and after the War were convinced that Sweden’s provision of iron ore was the most valuable of all of the contributions of neutral countries to the German war effort. Not only was the quantity of iron ore important, but the high quality of the ore made steel making more efficient, and the use of Swedish ships for transport eased delivery problems for Germany” http://1997-2001.state.gov/www/regions/eur/rpt_9806_ng_sweden.pdf

“Kiruna (LKAB) and Gellivare (AGM) were concurrent until the Swedish State acquired half of LKAB’s shared and retained the right to subsequently purchase the remainder. Soon LKAB also took control of the mining operations in Gällivare.” http://wiki.epfl.ch/linusgodet/basic

“Siemens (at the time: Siemens-Schuckert) employed some skilled labor among deported people in extermination camps. The company owned a plant in Auschwitz concentration camp.[11][12]… The company supplied electrical parts to Nazi concentration camps and death camps. The factories had poor working conditions, where malnutrition and death were common. Also, the scholarship has shown that the camp factories were created, run, and supplied by the SS, in conjunction with company officials, sometimes high-level officials” https://en.wikipedia.org/wiki/Siemens