While better than nothing, aren’t 29 lives lost worth more than this? What is the value of a life? There appears to have been overwhelming evidence of knowing criminal negligence in this case. Evidence shows it as premeditated murder for all intents and purposes. For almost 6 years, the US Congress has refused to pass a bill which would up the punishment to 10 years; $2 million. Still not enough but better than one year: https://miningawareness.wordpress.com/2016/04/08/the-us-senator-robert-c-byrd-mine-safety-protection-act-issues-labor-worker-safety-and-health-still-not-passed/ 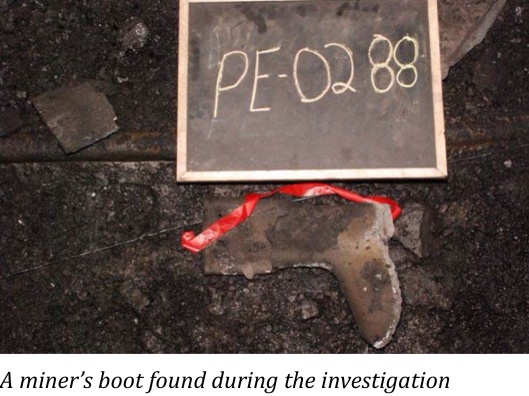 CHARLESTON, W.Va. – Acting United States Attorney Carol Casto announced that former Massey Energy Chief Executive Officer Don Blankenship was sentenced today to a year in federal prison and ordered to pay a $250,000 fine. Blankenship was sentenced for conspiracy to willfully violate mine health and safety standards after a jury returned a guilty verdict on the federal crime.

“This sentence is a victory for workers and workplace safety. It lets companies and their executives know that you can’t take chances with the lives of coal miners and get away with it,” stated Acting United States Attorney Carol Casto. “Putting the former chief executive officer of a major corporation in prison sends a message that violating mine safety laws is a serious crime, and those who break those laws will be held accountable.”

Over the course of the trial, in which jury selection began on October 1, 2015, and the jury returned a guilty verdict on December 3, 2015, the jury heard evidence from 27 witnesses called by the United States. Many of these witnesses were coal miners who worked at the Upper Big Branch (UBB) mine prior to the 2010 explosion, and they testified in detail from their firsthand knowledge of the unsafe working conditions at UBB, violations of U.S. Mine Safety and Health Administration (MSHA) regulations, and organized efforts to obstruct and interfere with MSHA inspectors. The jury heard from Bill Ross, former Manager of Technical Services at Massey, who testified that he warned Blankenship about the company’s practice of rampant violations, and told the defendant prior to the UBB explosion that Massey’s standard tactic of ignoring or defrauding MSHA could not be sustained without the possibility of a serious accident that could have fatalities. The evidence also showed that Blankenship received daily updates on safety violations and helped perpetuate them.

“Putting profits over the safety of workers is reprehensible. The jury acknowledged that with the guilty verdict, and the sentence imposed today recognizes that disregarding safety laws has real consequences,” said Casto. “From the beginning, the objective of this investigation and this prosecution was to not only show that those who violate safety laws will be held responsible, but also to deter these violations in the future to make everyone’s workplace safer.”

“Today’s sentence marks the culmination of a comprehensive, joint investigation that took over five years to complete and resulted in five criminal convictions.” said Special Agent in Charge Scott S. Smith of the FBI’s Pittsburgh Field Office. “Along with dedicated prosecutors in the U.S. Attorney’s Office and investigators in United States Department of Labor’s Office of Inspector General, the FBI is committed to holding those who commit crimes by enabling safety violations and who place profits above the value of human life accountable.”

“Donald Blankenship’s trial and conviction came after an explosion that killed 29 miners at the Upper Big Branch mine. His sentencing today reaffirms the responsibility of company executives to ensure they adhere to health and safety standards. The Department of Labor’s Office of Inspector General will continue to work with the Mine Safety and Health Administration and our law enforcement partners to investigate criminal worker safety violations that pose a threat to American workers,” said John Spratley, Special Agent in Charge of the Philadelphia Regional Office, U.S. Department of Labor, Office of Inspector General, Office of Labor Racketeering and Fraud Investigations.

The prosecution was the result of a comprehensive investigation that, including Blankenship, resulted in five criminal convictions. In addition to the convictions of individuals, the outcome of the investigation also included a resolution of over $200 million with Alpha Natural Resources after it acquired Massey. This agreement established a foundation dedicated to mine safety and health research, the first of its kind, and set aside nearly $50 million in funding for the foundation. That funding has provided the resources for some of the best and brightest minds in the country to pursue research that will make mines safer all over the world.

The prosecution is part of a sustained effort by the United States Attorney’s Office for the Southern District of West Virginia to protect the health and safety of West Virginia workers by vigorously prosecuting workplace safety crimes and holding accountable those responsible for dangerous working conditions.
USAO – West Virginia, Southern” https://www.justice.gov/usao-sdwv/pr/blankenship-sentenced-year-federal-prison “Former Massey Energy CEO Sentenced to a Year in Federal Prison Don Blankenship Sentenced on Federal Conspiracy Charge” https://www.justice.gov/opa/pr/former-massey-energy-ceo-sentenced-year-federal-prison