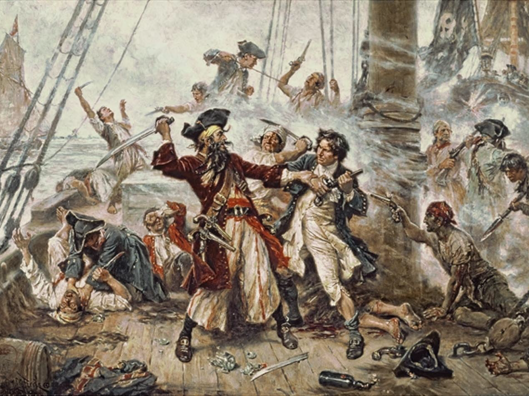 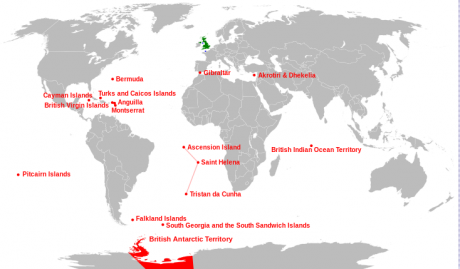 British Overseas Territories, many of which have been bound up in the leaks
Francesc Badia i Dalmases, Director, democraciaAbierta: “an old tradition of English piracy”

A stroll around any leisure harbour around the Mediterranean or the Caribbean will show a fair amount of Panamanian flags sported at the stern of the biggest superyachts. Other flags of convenience include St. Vincent and the Grenadines, Bahamas, Bermuda, Cayman Islands, Antigua and Barbuda… paradises of a few hundred years – an old tradition of English piracy. And they are still operating, yet now in another, more sophisticated scale. There is no need to hit and run anymore, you can comfortably sit in an elegant office in London or Zürich and get the transfers done. But the waters – now known as the internet – are becoming more and more treacherous, as a number of hackers and whistleblowers are sailing around in search of big game.

From current Argentinean President Mauricio Macri, to the former secretary of the Kirchner couple, from the financiers of Kaiko Fujimori, Peru’s current presidential candidate, to Juan Armando Hinojosa, Mexican president Enrique Peña Nieto’s favourite builder from whom his wife bought her famous mansion, known as “Casa Blanca”. The list continues with a substantial number of Brazilian entrepreneurs, already in trouble because of Petrobras’ Lava Jato corruption scandal, up to Hugo Chavez’s former bodyguard, who asked Mossaka Fonseca to help him with a number of offshore firms, to put some savings out of reach.

All this is very good news for transparency and accountability, but it adds fuel to the fire of the devastating discrediting of the political class that is sweeping across Latin America, and might bring some extra trouble in the form of “salvapatrias”.

Maxim Edwards, Commissioning editor, oDR: “The problem is as much of a systemic nature at the heart of the economic consensus as it is due to the moral failings of rulers across Eurasia.”

Corruption among post-Soviet elites comes as news to nobody, least of all the citizens themselves. Russian opposition-run bus tours of oligarchs’ properties have appeared in London — and every Ukrainian remembers the gilded opulence of Yanukovych’s Mezhyhirya Mansion when it was revealed to an outraged public. Many states across Eurasia are facing bleak economic prospects, and there’s the dissent to show for it. With fewer resources to play with, elites from Russia to Kazakhstan are having difficulty maintaining the social contracts by which their people distanced themselves from politics in exchange for modestly rising living standards.
[…]
The Panama files hold a wealth of revelations. Key among them concerns Putin’s inner circle, a childhood cellist friend, “donations” and “loans” from Russian banks and businesspeople, and a network of holdings in the BVI. The South Caucasus features too: at this stage, it would be more of a surprise were Azerbaijan’s ruling Aliyev family to not appear in such an investigation. There are also revelations about the reclusive oligarch Bidzina Ivanishvili, widely considered the power and the purse behind Georgia’s ruling party. Azerbaijan’s 2016 began with social protests erupting across the country. Georgia’s 2016 has seen surveillance scandals, miners’ strikes, a student protest, and will face parliamentary elections in autumn.

There may be no political repercussions for Putin and his coterie. While the Kremlin’s spokesman Peskov has dismissed the revelations as an “information assault”, state media are happy to report on the travails of Ukraine’s Petro Poroshenko. Popular trust in the president and in institutional politics generally have hit rock bottom in Ukraine, and leading media outlets from the country’s most powerful oligarchs (Akhmetov, Kolomoisky, Pinchuk) have been less than forthcoming on the papers. The behaviour of Ukraine’s elite against a background of a plummeting economy and continuing conflict ahas been despicable. On 21 August 2014, as Ukrainian soldiers were being killed in the Battle of Ilovaisk in the Donbas, Petro Poroshenko registered a holding company in the British Virgin Islands for the offshore transfer of his candy company Roshen. His political future now appears the most tenuous of all.

Yet moral outrage at these excesses, while completely justified, is only part of the picture. There is no excuse for the actions of elites in Azerbaijan, Georgia, Russia and Ukraine, but they have been enabled by an open-door financial policy in the UK and its many dependencies. The problem is as much of a systemic nature at the heart of the economic consensus as it is due to the moral failings of rulers across Eurasia.

Adam Ramsay, editor, openDemocracyUK: “If we want to understand modern Britain, first we need to realise that our primary economic function in the world is probably our network of tax havens”

There is a temptation, when looking at the astonishing Panama papers, to start by searching for politicians from your own country who are implicated. If you are British, then approached this way, you find slim pickings in the information released so far. https://projects.icij.org/panama-papers/power-players/#

Among the many thousands of names listed in the leak as possibly implicated in dodgy tax deals, there can’t be any appearance less surprising than Tory Baroness Pamela Sharples, the widow of the former governor of Bermuda. Until you get to Lord Ashcroft, who would have been more remarkable if he had been absent. Then there’s Michael Mates, a former Tory MP, who stood down in 2010 amidst another business scandal. And there’s David Cameron’s late father, but that was hardly a surprise.

This, largely, is to miss the point: not just the point of this astonishing leak, but the point of the UK. Because it’s hard not to look at the whole affair, and see Britain right at the core of it. Or, at least, the British State, which you might argue is a different thing.

There are, you see, a few important facts we are rarely told about the British State. Like the fact that it is responsible for more land in the Southern Hemisphere than the Northern and for more penguins than any other government, that there are eighteen legislatures [1] under Westminster’s wings, and that they include amongst them by far the most important network of tax havens and secrecy areas in the world.[2]

With the City of London at its core, Britain’s network of havens from tax, regulation and other pesky laws stretches first to the Crown Dependencies – Mann, Guernsey and Jersey – and then into the British Overseas Territories: the Virgin Islands, Bermuda, the Cayman Islands. From there, this web extends to places like Hong Kong: not under British rule since 1997, but, according to Nicholas Shaxton, still feeding “billions in business to the City”. [3]

Looking at the documents leaked from Mossack Fonseca one thing is clear: Britain’s network is once again at the core. More than half of the companies listed in the documents are registered in the UK or its Overseas Territories, and Hong Kong plays a huge role.

More than half of the companies listed in the documents are registered in the UK or its Overseas Territories
Of course, this shouldn’t be surprising. Britain has for a while now been thought to be the global capital for money laundering. And it’s no shock that nothing has been done about it. In 2010, two years after they crashed the global economy, the City paid for more than half of the Conservative party’s election campaign, helping (along with the aforementioned Lord Ashcroft) them limp over the line, with a Liberal Democrat-shaped crutch. Though, of course, Labour did little to regulate in the previous 13 years. [5]

If we want to understand modern Britain, first we need to realise that our primary economic function in the world is probably our network of tax havens. After all, around $21tn [6] is estimated to sit in offshore accounts, of which Britain’s territories are said to make up by far the biggest part. Our own GDP is only around $3tn.

Second, we need to get to grips with the serious claims about our role as the global money laundering capital: a function which pushes up the price of the pound, making other exports unaffordable (bye bye steel), and drives up the cost of houses in London and the South East, fuelling a vast speculative bubble which sucks investment out of the rest of the economy.

And third, we need to think about how this gradually dawning economic reality interacts with our politics: not through the obvious corruption of direct bribery, but through revolving doors between government and civil service, through old boy networks and friendship groups, through perfectly legal election donations and media domination.

That’s the picture that I suspect the enormous leak from a law firm in Panama will help us to fill in – if only a little. It’ll be a fascinating process. In the meantime, you can read my guide to Britain’s Overseas Territories here [1].”
Notes:
[1] https://opendemocracy.net/ourkingdom/adam-ramsay/many-legislatures-under-westminsters-wing
[2] http://www.financialsecrecyindex.com/
[3] http://www.newstatesman.com/economy/2011/02/london-corporation-city
[4] http://www.independent.co.uk/news/uk/crime/london-is-now-the-global-money-laundering-centre-for-the-drug-trade-says-crime-expert-10366262.html
[5] http://www.theguardian.com/politics/2011/feb/08/tory-funds-half-city-banks-financial-sector
[6] http://www.theguardian.com/business/2012/jul/21/offshore-wealth-global-economy-tax-havens
CC-BY-NC-4.0: https://www.opendemocracy.net/maxim-edwards-francesc-badia-i-dalmases-adam-ramsay/panama-papers-old-tradition-of-english-piracy [The original has embedded links some of which were changed to endnotes; more may be seen at the original.]

We hope that a US leak is coming soon and that it will involve the rumored offshore account of a US Agency. The rumored account allegedly stores bribe money given to the Agency by members (some? all?) of the nuclear industry and is said to have done so for decades.

Putin vs. Poroshenko Battling for the Ukraine? Both are persecuting environmentalists and promoting the nuclear industry. Thus both appear bad news. However, from the little that one is told, Poroshenko looks like he was preparing to go into hiding if Putin took over the entire Ukraine. Putin, on the other hand, is widely believed to lead a kleptocracy.

Jürgen Mossack immigrated to Panama from Germany after WWII. His father had served in the Nazi Waffen-SS
https://panamapapers.icij.org/20160403-panama-papers-global-overview.html

About Bank Rossiya:
“Yuri Kovalchuk is the largest single shareholder of Bank Rossiya and is also the personal banker for senior officials of the Russian Federation including Putin. Kovalchuk is a close advisor to President Putin and has been referred to as one of his “cashiers.”

The following entity is being designated because it is controlled by, has acted for or on behalf of, or has provided material or other support to, senior Russian government officials.

Bank Rossiya (ОАО АБ РОССИЯ) is the personal bank for senior officials of the Russian Federation. Bank Rossiya’s shareholders include members of Putin’s inner circle associated with the Ozero Dacha Cooperative, a housing community in which they live. Bank Rossiya is also controlled by Kovalchuk, designated today. Bank Rossiya is ranked as the 17th largest bank in Russia with assets of approximately $10 billion, and it maintains numerous correspondent relationships with banks in the United States, Europe, and elsewhere. The bank reports providing a wide range of retail and corporate services, many of which relate to the oil, gas, and energy sectors.” https://www.treasury.gov/press-center/press-releases/Pages/jl23331.aspx

Will Holtec’s K.P. Singh be implicated? Is he related to the above K.P. Singh? They certainly look related if you look at their pictures. If Holtec’s Kris Singh is implicated then South Carolina Nikki Haley who calls Singh a “family friend” may be; her father is actually from the same village as Holtec Kris Singh.

Dr Krishna Pal Singh is the Founder, CEO, and President of Holtec International.

Holtec Consulting Pvd in India was incorporated in 1967 by Umesh Shrivastava. This is the same year that Holtec’s Kris Singh got his diploma in India.

Will Henri Proglio be implicated? He is tied to Rossiya Bank group.

Henri Proglio former head of French State owned nuclear utility EDF is a member of the board of ABR management, led by senior managers from companies with the Rossiya Bank group. Proglio is one of five board members. He also is on the board of Akkuyu Nuclear JSC and Fennovoima Ltd, Rosatom subsidiaries created to build nuclear reactors in Finland and Turkey. The two ABR co-chairs are Kirill Kovalchuk and Dmitriy Lebedev and the three regular board members are Marco Piccinini, Angelo Codignoni, Henri Proglio
http://www.reuters.com/article/thales-proglio-idUSL5N0XZ2NH20150508
http://www.bloomberg.com/research/stocks/private/people.asp?privcapId=247710894

Clicking on image above leads to the NYT article (or link if it reverts to link)
https://panamapapers.icij.org/20160403-putin-russia-offshore-network.html